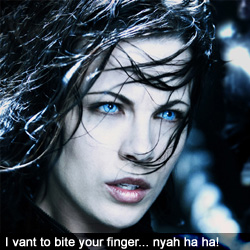 Back in the days when I was healthy - before a seasonal virus transformed my previously sparkly-clean lungs into two mildewed tea-bags (i.e. about 5 days ago) - Karen and I enjoyed a rare treat: a night out at the cinema whilst our friendly neighbourhood babysitter did exactly what it said she'd do on her tin.

Nothing too weighty or worthy for us. Oh no. It had been a hard week and we fancied something "light" and "fantastic". We also both fancied some cinematic eye candy. Kate Beckinsale for me and Michael Sheen for Karen. "Underworld: Rise Of The Lycans" then, seemed a rather apposite choice.

The first 2 Underworld films are universally judged as "frustrating". The cinematography is excellent. The casting is good. The use of technology within the age old tale of Vampire vs Werewolf was smart and intelligent. The scripts weren't half bad. And yet...

And yet they both fell short of the mark. And fell short in ways that were extremely annoying to the viewer.

"They could have been so much more..." "They almost made a great vampire movie..." Etc.

The first film was great right up to the final battle sequence with the long awaited vampire / werewolf hybrid. The effects men caused the film to fall down at the last hurdle. The resultant monster was clumsy looking and visually risible.

The second film... well. The second film had a storyline which should have resulted in the death penalty being given to the script writers immediately. It was lazy. No other word for it and a complete waste of the talents of both Kate Beckinsale and Bill Nighy. Gah. Let down again!

So I wasn't expecting a great deal from the third Underworld film...

Except it did feature the startling Michael Sheen reprising his role once more as Lucian the Lycan / human hybrid. Now Sheen, I have to say, had been faultless in his earlier Underworld performances but the role of Lucian was given too little screen time for his character and Sheen's acting skills to impinge much onto the consciousness of the general viewer. He was given far too little to do.

Not so in "Rise Of The Lycans". He carries the entire film. In fact he doesn't just carry the film as hoof it straight out of the chasm of disappointment and into the starry stratosphere of "total film satisfaction".

Mr Sheen (shines all things clean) is already building up a humungous career for himself in Hollywood and I suspect his rise will be (unlike the Lycans) meteoric. On our tellies in the UK he's been fabulous as Nero. A revelation as Kenneth Williams. And at the cinema, if the critics are to be believed, he's totally masterful as Frost in the current Frost/Nixon film.

He's going to be big.

"Rise Of The Lycans" is the best of the Underworld films by far. Sheen brings depth, poignancy, believability, empathy - his full and formidable acting range in fact - to his role as Lucian. Plus (according to Karen) he looks damned hot in leather. He's also surprisingly believable in the brutal fight sequences. It's bizarre to see such a sensitive character actor suddenly tranformed into an action / romantic hero. And yet he accomplishes it all effortlessly and, most importantly, without losing any of his sensitivity. The man has my respect. He has finally brought something much needed to the Underworld franchise: a sense of emotional relevance.

Bill Nighy reprises his role as Viktor and is just joyous to watch as always - totally convincing as the grand vampire patriarch and the bird-blue eyes are a nice touch. He somehow manages to be cold, cruel, callous, delicously English and yet always "warm uncle Bill Nighy" all at the same time.

I've been remiss and probably should have read the film synopsis more closely and realized that this was a prequel not a sequel to the Underworld series! Doh!

So instead of Kate we were served up Rhona Mitra as Viktor's sensually lipped vampire daughter, Sonja, and Lucian's illicit love interest. Yes, she's eye candy. Yes, she's good. But she's just not Kate Beckinsale in tight black leather no matter which way you cut it, so I was a mite grumpy and a little bit sulky for the first third of the film to say the least.

And yet it still managed to completely win me over.

I'm afraid that it's twice bitten, thrice shy for me - and yours is the only good review I've read so far. My mates who went without me last week reported back that it was "werewolf excrement". Then again, they don't watch Demons either. ;-p

By the way, I'll be fascinated to read your views on Minder with Shane Ritchie. Ugh... the very thought!

I can understand your reservations, Rol, but the wife and I really enjoyed it. But maybe I lower the bar with films of this nature? I confess to loving the Harry Potter films too.

As for Minder... I never watched the original. I don't go a bundle on Shane Ritchie so there is little to entice me to the new "re-invention" of the show. From the trailers it all looks rather naff (but marginally better than Demons). Regurgitated second-hand meat is never appetizing... ;-)

Ah, if you weren't a fan of the original, you won't understand the sacrilege!

Oh I don't know. Employing Shane Ritchie is any televisual capacity whatsoever is surely sacrilege of the highest order?

Hee hee! Glad you enjoyed it in the end.

I did indeed, Suburbia, even if nobody else did! ;-)

Michael Sheen is rather good in Frost/Nixon which is also currently out and a great deal better than I expected it to be, given it's apparently thin premise.

I can recommend it as your next cinema outing anyway.

I'm envious that you managed to escape the house to watch a grown-up movie! The only movies I have seen at the theatre/cinema/pictures have been kiddieflicks (last one I saw was Indiana Jones and the something of the chrystal skull)....mind you, the husband took the 11 yr old and her mate to see Twighlight and they all loved it. I end up seeing movies months later on DVD. Harumph.

Well, I watched loads of films on the plane so I was hoping I might be able to actually say something about films for once. But I didn't see this one!

I spent a happy 5 or 6 hours watching old TV progs Ashes to Ashes and Spooks so I got plenty of Keeley to keep me awake!!

Oh - and good morning!! I think you should just about be getting up now!

Thaks Laura, I think Karen would be up for it though I have told her the chances of Mr S appearing in leather are thin.

Amanda, I still haven't seen The Crystal Skull movie - the reviews were so bad and I felt so let down by a film franchise that I loved as a kid that I couldn't motivate myself enough to go. I haven't even bought it on DVD. I'm waiting for the bargain bins, I'm afraid.

Good morning, Gina! 6 hours of Keeley? You know I might fly to Australia and back just for the sheer hell of it... ;-) Glad you're there safely! We've had more snow here!

You know, I never even realised that Michael Sheen was in the first two films! I had to doublecheck on Wikipedia as I thought you were mistaken!

BTW: Underworld is a massive rip-off of a 2000ad strip featuring a Romeo & Juliet/Vampire & Werewolf story named 'A Love Like Blood'...

just so you know...the new season of heros started here and the first show was really good...!!!!!

Thanks Daisy, that's a welcome heads-up - Wednesday night TV is a mite drab here without Heroes! ;-0

Bulldog has a bit of a thing for Kate.
i thought it was the name, but it turns out it's actually the whole vampire persona.
no comment X

I was really sitting on the fence about watching this one, but I've decided I'm going to.

I'm glad you reviewed it.

You're always there for me brother!

Kate, not sure about the whole vampire persona myself - personally I think the teeth would get in the way of a good kiss. But there is something about a woman who comes "alive" at night...! ;-)

Sweet Cheeks, I do it for you every time!

Seriously, couldn't agree more with this posting and plenty of people look at me like I'm mad whenever I work anything like hard or go places in the snow (mind you I've just spent two hours trapped on a snowy road between a 3-vehicle collision in the Banbury area). Lack of grit strikes again...?

Not sure if you meant to post here, Laura, or on the post that followed (No Grit)! ;-)

The one year old was rather ambivalent about the snow. Grisled when we let him play out in it for a little while and then was most unhappy when we brought him in again! I don't think he quite got the "magic".