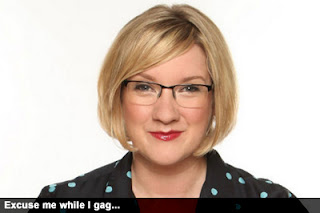 You won’t have heard my name mentioned at last night’s BAFTA awards but you may have heard one of my jokes.

At least I think it was one of mine. It was a pretty damned weird coincidence if it wasn’t.

Some of you may have heard of this “Twitter” thing. A few of you may even use it on occasion. I know I tend to use it very occasionally. And like a lot of people on Twitter sometimes I get sucked into “Following” various celebs just to feel idiotically closer to them. The whole thing is very shallow and needy and more than a little shameful.

On occasion, when temptation gets the better of me, I may even try and send a Tweet to one of my favourite celebs, just in passing, nothing heavy meant by it and the whole exercise in no way affects my emotional or mental state to have you ignore me yet again, thank you very much, that is the last time I EVER EVER watch one of your shows, do you hear me you arrogant stuck up arsehole?

Because, of course, these people are bombarded with Tweets from needy idiots all the time wanting the instant gratification of a response from someone famous just to they can write a blog post about it. So many Tweets in fact that you have more chance of seeing Romola Garai’s stiches than having your Tweet actually seen by the intended recipient let alone having it replied to (and you will have to have watched last night’s BAFTAs to get the stitches reference).

I know this. So I have Tweeted a celeb on no more than 3 occasions in all my years using Twitter. Most of the time I am sane enough to keep away from such shenanigans. But sometimes, just sometimes, I get drawn in.

As I did yesterday morning. I just happened to see a Tweet from buoyant Northern comedy lass, Sarah Millican. She was on her way to the BAFTAs, was plainly nervous and so had done “a little sick in her mouth”.

To which yours truly, unsung comedy genius and master of quick wit and repartee that I am, replied, “Shouldn’t it be the BARFTAs then?” 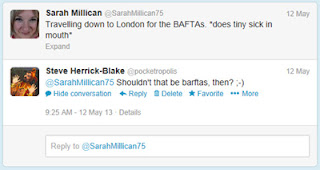 The awkward Twitter silence that followed that gag made me feel pretty sick I can tell you. But I shrugged it off – *sigh* I never learn – and felt no negative feelings towards Sarah Millican; she's lovely. I rationalized it. It was my neediness that was at fault not the fact that she was too busy. C’est la vie.

And then at the BAFTA’s, lo and behold, whilst presenting an award Sarah makes a reference to the difference in Northern and Southern pronunciation and that now she was down South she ought to pronounce BAFTA “BARFTA”…

So a different spin put on it but the punch-line was essentially mine.

Or am I reading too much into it?

Was it just a coincidence?

To be honest, I don’t want any credit. Just the opposite. I want to assuage some guilt. The joke fell flat and I feel responsible.

Sarah, I’m sorry, pet. I feel like I really let you down.

Tweet me soon and we’ll talk about it. Kay?

Royalties. I'd demand royalties. I thought the joke was pretty good actually. There's no accounting for taste. I'm one of 3 people in the world never to have used twitter or facebook and I'm actually pretty proud of it!

Craig: I'm dead cheap, me. I'd settle for a quick snog. With Sarah. Not you. No offense. But if you were on Facebook I'd poke you.

Craig is too soft. Sue for breach of copywright. That joke was worth millions. You could have retired tomorrow. Those celebrities just make me sick (barf)

Daylight robbery, pure and simple. She stole it to make an inferior joke. As a penance, she should bear your child by artificial insemination.

Gorilla Bananas: artificial insemination? But surely that will be a punishment for us both?

The joke fell flat? Deny all knowledge! It wasn't you, you didn't do it, no one can prove that you did it!

Kellie: you're right! It wasn't me. My Twitter account was hacked! My blog was hijacked! Even this comment here is the result of someone stealing my - er, Steve's - identity!

Jimmy Carr nicked one of my partner's jokes after they met in a comedy club my partner used to run. O has never forgiven him!

Laura: I'm sure Jimmy would describe it as "an error of judgement".

I watched it at the time and wondered if it fell flat because someone earlier had said something similar. Or am I imagining that?. I hadn't thought of barfta with its sick connotation, just thought she meant it like bath/barth. Either way, your tweet was a good 'un.

I know someone who once tweeted Stephen Fry to tell him he had left about £1000 worth of caviar in his shop. SF did not reply. My friend concluded he didn't read his tweets at all. But then, he is a bigger star than Sarah Millican, and yes, it does sound a teeny bit suspicious that she had the same idea. OTOH what can you really do to make a word like BAFTA funny - if it even is a word?

Don't forget us little folk when you are a comedy writer for important people, will ya! :-)

Trish: to be honest Graham Norton did do a Barfta gag too so that would undoubtedly have contributed to the atmospheric vacuum that ensued. I really feel that Graham nicked my joke too but I can't prove it.

Jenny: is Mr Fry a big caviar eater? Sounds a mite fishy to me either way (sorry).

You definitely put the thought in her head; no way not. Probably always be welcome in South Shields now.

Brother Tobias: worth it just for that.

That makes me sick. Bloody comedians. Make up your own bloody jokes! etc.

Rol: or at least pay your writers a decent wage.