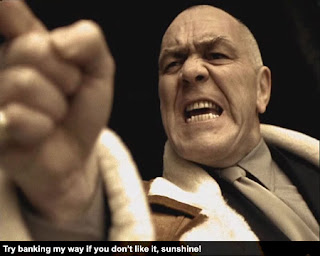 I got my first credit card when I was 18.

And that was the beginning of the end. The end of living life my grandparent’s way. Their ethos was very much if you haven’t got the money, you go without. I don’t think my grandparents ever owned a credit card. Ever. They had a cheque book and if they wanted cash they got it over the counter at the bank. And if there wasn’t enough in the account they didn’t draw it out. And that was it. If the bank ever sent them credit cards when it became de rigueur to have a bit of plastic in your wallet I never saw them use one. Aside from their inevitable mortgage, they were deeply suspicious of virtual money and ATMs. Undoubtedly it was a generation thing.

And, of course, ironic. Banks have for centuries dealt with virtual money and the idea of a “promise to pay”. The countries of the West are built on this ethos. On spending money that they haven’t got. It is the basis of all speculation.

When I got my first credit card no real harm was done. I was single, living at home with parents who hardly fleeced me for housekeeping money and so I had more cash that I sensibly knew what to do with.

I frittered it away on books, movies and music – and later travel. And it was fine ‘cos when that bill landed on my doormat at the end of the month I had enough spare cash floating around to pay it all off immediately.

And that’s the ideal. That’s how using a credit card should be.

But later in life – much later – paying stuff off all in one go became impossible. It became the norm not to do it and those halcyon days of settling my account without a second thought became a novelty. The honeymoon period between my flexible friend and my salad days was well and truly over.

When real life kicks in – when you’re standing on your own two feet – it’s all too easy to fall into the credit trap; the overdraft pit; the snare of buy now pay later and then keep paying and paying for a very long time.

And if you are canny you do the credit card transfer dance for a while. Or “debt consolidation” as it is sometimes called. Lumping all your outstanding debts into one big sum that you bung on an interest free credit card deal in the vain hope you’ll get most of it paid off before the interest finally kicks in.

Of course, all you’re doing is “promising to pay” the vultures who are happy to sit and wait and let your meat tenderize itself as the pressure softens you up. And the longer they wait the juicier you’ll be.

It’s the law of the financial jungle.

This year, however, I made a decision – a resolution in fact – to get myself out of the credit trap. To consciously and conscientiously budget each month. To pay off debts without accruing more. To not dip into my overdraft but to stay in the black.

So far, 5 months in, I’ve managed it. My debts are being whittled down, bit by bit – they’ll be with me for a year or two but they’re shrinking, losing volume and threat. And my overdraft is a 5 month virgin, i.e. undipped into and I mean to keep her that way.

My credit cards are, by and large, becoming orphaned. More, they’re becoming strangers.

We used to be so close but now I can see it was always an abusive relationship. I’m only sorry it took me so long to realize that and do something positive about it.

Now that I’m away from the situation I do hope that one day they’ll learn to forgive me and move on.

I know the fault was mostly mine but I can’t help feeling that, in their very nature, they colluded in my weaknesses and led me on. And despite the protestations of the banking history of the world I can’t help thinking that my grandparents had the right idea.

Virtual money never leads to virtual riches. It only ever opens the door to very real debt.

You can't get rid of your credit cards because it's cheques that are going to disappear. Do you realise how much money is wasted clearing those stupid chits? Anyway, I'll give you an interest free loan if you'll put forward your beard as collateral. If you default, I'll send round a chimp to pull it off one hair at a time.

Gorilla Bananas: I'd rather trust your monkeys than the banks. They probably have more business acumen for a start off.

Well done Steve...chipping away is the way to go. I've never gone down the credit card route .. mainly 'cos I am a scaredy cat...but only had a debit card.......and I used to like cheques....and getting paid in coin of the realm in a brown paypacket every week......blimey ..how old do I sound!

Libby: the sad fact of life is credit cards are a menace but they are unavoidable. I really think managing one's finances is something we should be teaching kids at school.

My grandma showed me her household bills and budget book, the ins and outs and I kept one for years myself. She also said you can have the mortgage, a car loan and one on the knock and never any other credit. I did as she said for years and then I let it all drop and maxed credit cards out - I recall the start of the spiral was a broken TV, I needed the credit to buy a new one, and once the card wasn't paid off in full one month then it seemed easier and easirt to ignore the rising debt. It took a long time to get myself out of that debt and negative equity but just the way you are doing I finally managed it.

How I agree about classes in managing money...but the banks would never stand for it!

K Ville: the old adage is true - look after the pennies and the pounds will take care of themselves.

The fly in the web: I like your thinking. Might be time to find a new kind of stuffing for my mattress...

Bravo! You're an example to us all.
A recent change of law here requires all credit card statements to clearly state "If you only pay the required minimum balance, your debt will take xyz years to pay off". I think it's been a good reality check for many.
Have you looked into renegotiating your interest rates on your cards? That can make a huge difference.

English Rider: to be honest I transferred the balance onto a personal bank loan with the repayments set monthly - so I also know precisely how long it will take to pay if off; it won't go on forever and ever. The limit on my card has also been significantly lowered which is another incentive to be more careful and choosy with my purchases. All in all I feel more in control and am being more conscious about my spending decisions.

John: seems to get everybody's vote. I wonder why it doesn't happen? Maybe to keep the bankers in their jobs...?

As a society we have 'normalised' debt - and we reinforce this with structures such as student living loans and fee loans. There comes a point I think where young people are reasoning, ' I'm going to owe £30k so it might as well be £35k..'

Very sad, and driven to huge extent by an over priced housing market, a banking industry that thrives only if people borrow, a live for today culture that inevitably has its hangover

The bike shed: indeed... accruing debt has become a rite of passage or a sign of entering one's majority. A graduation the university of ambition and acquisitiveness into the world of global debt.