Where’s Lenny McLean When You Need Him? 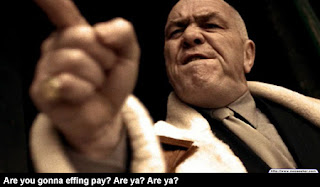 This post has been inspired by an article on the BBC News web site this week about a mother who, having arranged a birthday party for her young son, is now threatening legal action against another parent for his son’s failure to attend said party (and failure to advise he was otherwise engaged), thus leaving her out of pocket.

I don’t want to worry my old school chums but… actually, in reality, I really do. I want to put the frighteners on all of you. I want to get Ronnie and Reggie Kray on yo’ ass. Two Smoking Barrels and all that shit.

‘Cos it turns out you all owe me money. Loads of it.

Yeah. You heard me. You’re all into me for… ooh, taking inflation into consideration, at least £300 each.

And don’t all sit there with that nonplussed innocent look on your faces. You all know exactly what for.

All those birthday parties I had.

That you never came to.

Oh, you’re all crying and bewailing those RSVPs now, aren’t you? I don’t care if your gran / pet had died or your folks were taking you on holiday to Cornwall or you were double booked or even – cheap shot – it was your own birthday.

The point is, I had a birthday party and you didn’t come. So basically my family had catered for you, exerted a financial outlay – balloon animal, crisps, chocolate, Vimto and party bag – and you never showed up. We spent that money – money which we could ill afford, I might add – and you basically came round and threw it straight down the drain by not actually coming round and eating the food and popping the balloon animal we’d set aside for you. If we’d known you weren’t coming we wouldn’t have booked the clown and the money could have been spent on another present for me.

Yeah. That’s right. You denied me a present at my own birthday party. Two in fact. The one you didn’t bring me (because you didn’t come) and the one I could have had bought for me if we hadn’t wasted all that money instead hiring Kiddy Fiddler The Clown purely for your ungrateful and unexercised entertainment.

What a horrible bunch of friends you are. Utterly dispicable. It’s only because I’m a decent friend that I’m not suing you for emotional cruelty.

And you wonder why I’ve never stayed in contact over the years or indeed can hardly recall any of your names?

Just pay up. The invoice is in the post.

LCM: you're in the clear. I know you'd actually turn up to my birthday party (if I ever have one).

I was about to advise you to hire some chimpanzees to come to your birthday party when I saw the word 'Vimto'. Never tasted it, never seen it, but I know the company that makes it earned pots of money for its shareholders. It is any good?

Gorilla Bananas: no idea - I'm more of a Ribena man - but apparently Vimto puts a big purple smile on your face. So what's not to like?

I never turned up 'cause the girls you invited were ugly and smelt of Harpic. My mother said those sort of girls got boys into trouble and.....babies.

There's a jammy dodger or two in the post. So there!

I saw reports of this but didn't delve into the details. I have questions that might affect the truth of who is right and who is wrong. Did the no-show kid's parents originally RSVP that he would attend, or not?
Either way, I couldn't help but think that a learning moment (on manners and friendships and the handling of misunderstandings, without burning bridges)was lost and the poor kid didn't look happy to be the center of such attention.

Barry: a jammy dodger forgives all. Hope you put it in a Jiffy Bag.

English Rider: Agreed. Various legal experts when told of the case have poo-poohed it as unfounded. There was no contract. I also think it ridiculous that the woman chose to hire a ski slope - of her own volition and choice - and then decided to punish someone who had the temerity not to fall over themselves to accept the invitation.

I'll be very careful if letters containing cards from your area arrive here in Costa Rica....

This actually seems completely fair enough. I have no problem with this. I'm sorry for not attending.

Fredulous Yo: good man. Now. We really need to talk about my New Year's Eve party...

You might have missed out on a present or two but you must have accrued lots of unused party bags full of tat. You should be grateful to the no-shows, I reckon.

Trish: the cheap tat doesn't make up for the expensive present that I know you would have bought me.

Nota Bene: it was his first job after getting out of prison; he was dirt cheap.