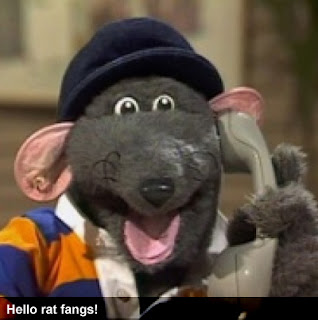 Despite being an avid fan of the BBC's Springwatch it seems I still have not yet learned to tell the difference between a rat and a mouse (though I'm pretty sure I could tell the difference between sheep droppings and otter spraint). Our cats, Missy and Kia, managed to bring a rodent hostage into the house over the weekend. The thing went to ground beneath our oven and found further progress prevented by the constant supertrooper gaze of the cats who sat stolidly on patrol waiting for it to put a paw wrong.

In the end, armed with a torch and a stick, I set about trying to break the status quo by dislodging the creature - preferably into my custody - before the advent of Sunday lunch baked the little blighter into the lino. I was convinced it was a mouse. Small, cute, beady black eyes. I now suspect it was just an adolescent rat. Anyway, all I succeeded in doing was driving the thing from out beneath the oven and across the kitchen floor to the fluffy world that exists beneath the washing machine.

Our cats, prime mousers that they are, didn't move a muscle from the oven and indeed continued to sit on patrol for the rest of the night whilst Monty (as I shall christen him) gave them the finger from the other side of the kitchen.

I figured that sooner or later food would drive Monty out into the open and into some risky manoeuvre that would put him squarely into the hungry sights of our cats. I forgot about him. I let the cats wage their war of attrition and got on with my life.

Until I was awoken by terrified squeaking this morning and the sounds of a life and death game of hide & seek out in the hallway. I emerged to find the cats furiously pawing at the unloaded shoe rack and guessed that Monty had indeed made a bid for freedom and had got himself corralled by the cats into a hell of high heels and flip-flops.

If I'd been more awake I would have twigged that (a) a mouse would not have eluded 2 cats for this long, (b) doesn't make a huge deal of noise when panicked and (c) doesn't have a long, furless tail.

Trying to be a hero I thought I'd do the humane thing and rescue the little bugger. I am perversely proud to say that where the cats failed I succeeded and managed to capture Monty within my own paws after a mere 3 attempts.

At this point things went slightly awry when Monty sank his fangs into my finger and began to gnaw with the contempt only usually reserved for the UN by the Russians. I may have cried out at this point (in a manly way obviously) - especially as Monty was freely swinging from my finger like a weird piercing without any support from myself.  And I realise with the benefit of hindsight that Monty plainly felt himself caught between a rock and a hard place. He didn't want to be within my grasp so was biting me in self-defence but neither could he let go as gravity would drop him into the waiting jaws of Missy and Kia.

I did that stupid dance that one does in such situations - trying to decide whether it would be best to throw Monty out of the backdoor or the front-door before his gnawing pushed me to the conclusion that to part company in the quickest possible fashion would be best. I managed to get the front-door open with Monty still hooked into my finger and then, once outside, Monty was happy to let himself free-fall into the nearest bush. Missy followed him out and sat, slyly sentinel, for half an hour or so amongst the underbrush before returning empty jawed so I have no doubt that Monty escaped completely and utterly and is no doubt even now recounting to his family how he ran rings around 2 cats and a human and got a bit of a free feed out of it.

For me it has meant a trip to my GP and a week's course of antibiotics as according to my doc any kind of wild animal bite leads to infection in 9 out of 10 cases. Charming. I'm also to return immediately if I start to feel ill anytime over the next 2 weeks - rats can carry nasty diseases and while such infection is rare it can happen.

Next time I shall bugger humanity and batter the bugger's brains out with a pair of Doc Martens.

Crikey you are brave....I am still getting the vapours over any small dead mice that our cats bring in to the house. Keep taking the tablets.

Libby: the dead mice don't bother me. The half dead mice are another matter entirely.

I must respect your Buddha-like compassion for a rat, even though picking it up in your bare hands was the act of an accursed fool. Put on the oven gloves next time. Your cats are so dopey! Have they ever tried to paw your beard?

I expect the rat is off to his veterinary equivalent for jabs...goodness only knows what these humans carry...

Gorilla Bananas: oven gloves... check! Have to say my cats have studiously ignored my beard. I am trying not to take it as a criticism.

The fly in the web: I hope he enjoys his dose of paranoia, ennui and bleak despair.

Positioning a long boot (wellies or rising boots work well) on its side, along the base of the wall works well. Rat runs in to invitingly protective looking tunnel, Human rights boot and carries it outside.

Great Karma man. The Buddha will look kindly on you. One question "Why Monty?"

oh man.....
i'd probably vomit if that happened to me.
we had a mouse invasion once, it wasnt pretty, best to let the cats get all the rodents, in my book

You mad fool. I actually gasped when it bit you. Like in the best suspense novels. Inevitable, but I didn't see it coming.

And keep off the rodents.

Do NOT get rat flu.

Kylie: nine times out of ten it is mice that the cats bring in (or rather, half-mice) so I incorrectly assumed I was dealing with a humble Mus musculus rather than a more fiercesome Rattus rattus... otherwise I would not have rushed in.

Keith: at least I know I'm clear from the Bubonic plague... the BBC told me this week that that was spread by giant gerbils.

Are you mad? All those shoes around you and you tackle it with your bare hands?
I bet your doctor is wondering what you are going to come into the surgery with next!

Trish: I thought it was an innocent, defenceless mousey! Honest! Otherwise I'd have been armed with a claw-hammer.

Don't, whatever you do, go outside if you suspect an alligator is in your garden.

Fran: especially as I'm likely to confuse it with a crocodile.

John: my nan often told me of their cat, Sandy, who in the fifties took on a king rat. The rat was starting to win so the milkman had to wade in and bludgeon it to death with a milk bottle. Cat saved by milk.

Yuck, I could not, would not and should not ever be tempted to pick up a mouse/rat, live or otherwise. You are a very brave nutter. I on the other hand am a very cowardly nutter

Cherie: on the bright side you're unlikely to get bitten and spend a week taking antibiotics...!

suplemen pemutih wajah: you're on drugs, aren't you?

You'll know next time of course...
Have you noticed how cats make a meek little sound when they have a small creature in their mouth? I'm learning that it doesn't mean "Please let me in because I'm feeling lonely and cold," but rather "Please let me in so that I can show you my bounty and then let it run/fly around for a bit of sport."

Lady Mondegreen: for such lethal little buggers they show a charmingly vast lack of self-esteem in their constant demand for approval and praise. They don't need to festoon the house with carcasses... they tend to have me at the first purr.