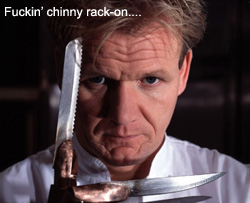 I have to confess towards a huge liking for Gordon Ramsay. In fact both Karen and I are avid fans of both The F Word and Ramsay’s Kitchen Nightmares. Both shows are compelling viewing. It’s highly amusing to watch the (apparently) super competent Gordon Ramsay rail against the inadequacies and physical dysfunctionality of the mere mortals flapping around him.

Of course I’m sure it’s Gordon’s abrupt and formidable manner which makes people flap and bodge about in the first place... but weirdly no true sense of class / personal superiority ever emanates from Gordon. He doesn’t think of himself as being better than anybody else – he just seems to be driven purely by a desire to do things properly and have others do the same and takes it very personally when someone else’s idea of perfection isn’t on a par with his own.

I think I like Gordon the most though because of his zero tolerance towards crap. He just won’t have it. Not in his kitchen. Not from those around him. Not from anywhere. And when he encounters it he is eloquently contemptuous and doesn’t pull any punches. He tells it like it is and my God don’t I wish I had the balls to do the same. Don’t we all?

Best of all though I like Gordon for his sense of decency and fair play. When he’s gone too far with someone he apologizes and makes amends. He’s a top bloke. And it explains why his staff are so fiercely loyal.

But each time I watch his shows I can’t help but be fixated by the fact his chin looks like it’s been on the receiving end of a malicious pastry crimper. Just what is that mark? A scar? A bizarre wrinkle formed by years of sneering at ham-fisted sous chefs? The join of a false rubber latex chin?

I need to know.
Posted by Steve at Friday, December 08, 2006
Email ThisBlogThis!Share to TwitterShare to FacebookShare to Pinterest
Labels: GordonRamsay, Ramsay’sKitchenNightmares, TheFWord