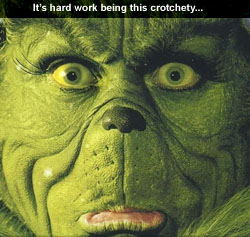 No. Not a reference to Johnny Vegas suddenly announcing a highly unlikely swing to the homo side of the street but instead a play on the French word for fatigue...

Yes, I’ve been burning the candle at both ends so much over the last few days that it now resembles Darth Maul’s light sabre. Only without all the balletic wrist-twirling, jump-kicking and grimacing.

Well actually there’s been lots of grimacing. My face has been pressed to the grindstone so much that if I were a CB radio ham my handle would undoubtedly be The Grindstone Cowboy...

Swamped by crap in my day job, my burgeoning web design business has also been hotting up so much that I’ve effectively been working 12 hour days for most of this week. I’m amazed at how dour “all work and no play” makes me. Christmas seems another world away rather than another week away.

Still things should slack off by the weekend and I can try at last to regain my Christmas spirit and joi de vivre.

After all there’s no point being a humbug at Christmas time if you haven’t got the energy to enjoy it.
Posted by Steve at Thursday, December 14, 2006
Email ThisBlogThis!Share to TwitterShare to FacebookShare to Pinterest
Labels: BrighterWebDesign, Christmas, fatigue, work