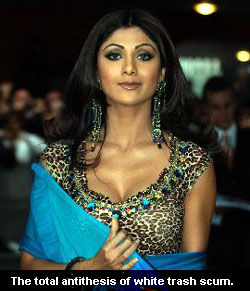 I was thoroughly repulsed by Jade’s vile temper last night. But what really sickened me was watching Danielle and Jo stifling idiotic giggles behind the sofa cushions like immature school girls whilst Jade subjected Shilpa to a tirade driven purely by her own xenophobic misconceptions and class insecurities. What an absolutely horrible coven of witches. For the entire duration of Jade’s baboon-like rant I found myself willing someone – anyone – to fill a bowl up with water and tip it all over Jade’s orang-utan shaped head, anything to shut her up.

Shilpa impresses me more every day with the strength and dignity she is showing by putting up with this kind of behaviour and not letting it grind her down. The Force is strong in this one. Unfortunately the three evil witches are making me ashamed to be British. The only consolation I have is knowing that they’re going to get a right royal kicking from the public once they’re ejected from the house. That and the knowledge that their respective careers are in tatters.

Mind you, what careers? Jo’s done eff all since S-Club 7 (thank God). Danielle is a shamed beauty queen and footballer’s wife wannabe and Jade... well, Shilpa was right. Jade IS only famous for being on BB. That and being as thick as the proverbial whale omelette. The truth hurts doesn’t it, Jade? They are the three sorriest excuses for celebrity status I have ever come across since... well, since Leo Sayer really. And that’s saying something.

As for the hoo-ha that their bullying has since engendered. The BB production team is obviously lapping it up. It could all have been nipped in the bud long before it erupted into this huge global melee (protests in India? my God!) but I did like the fact they got Danielle into the Diary Room and asked her to explain what she meant when she said that Shilpa ought to "eff off back home". Her pained expression was joyous to behold. You could practically see the penny dropping.

One final point: I find the sudden interest from politicians in all the issues currently thrown up by BB blatantly transparent. Talk about commandeering the bandwagon! I find it truly amazing that it took the UK Government days and days to formerly condemn the way Saddam Hussein was executed yet they can comment on BB with an immediacy that must have popped their stomach ulcers with the speed of Leo Sayer whipping his underpants into and out of a laundrette. I guess slagging of the inherent racism of white trash scum is politically far safer than daring to suggest that Saddam’s execution was handled badly and has got the West’s hands even dirtier...
Posted by Steve at Thursday, January 18, 2007
Email ThisBlogThis!Share to TwitterShare to FacebookShare to Pinterest
Labels: BigBrother, celebritybigbrother, JadeGoodey, Shilpa, threewitches

Excellent post Steve, very well-written and perceptive! You sum up the whole situation very well. And how odd - I have written about the same thing again! But then it's a very current topic isn't it.

I agree with all that you say and you're spot on - funny that we both see Jade, Danielle and Jo as witches but that's what they are! And I agree, they've all really shot themselves in the foot (feet?!) with their behaviour. Thoroughly despicable. As you say, none of them are exactly enjoying glittering careers at the moment, so this is probably going to make things even worse for them. Ha! Oh well girls, it's back to the checkouts at Tescos then!!

Goodeness, what snobs we are.