Rough As A Badger’s Arse 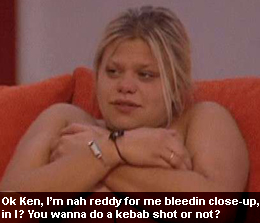 Despite staunch attempts not to let Big Brother commandeer my entire blog I find myself compelled yet again to compose another BB related entry.

All my snobby affectations are now thoroughly undercut. It’s official. I’m as hooked on BB as anybody else, admittedly for the sole purpose of sneering at the moral / social / intellectual ineptitude of other people, but hooked nonetheless.

And my God, talking of intellectual ineptitude on a grand scale… we now have the Goody’s in the Big Brother house. Alas not the 1970’s gibbon-esque funky funsters fronted by grumpy old twitcher, Bill Oddie, but Jade Goody and her slack-jawed boyfriend and her cosmetically unslack-boobed mother.

Effing hell and I thought Jade was bad. Jade (a voice that can strip paint at 400 yards and the cranial capacity of a used tissue) is a white trash Carol Vorderman when compared to her gravel-gobbed mother. Ma Goody is as rough as the proverbial badger that’s had a 40lb backpack strapped to its shoulders and been made to slide arse-first down a 250 metre waterslide lined with broken glass. Even poor Jermaine – usually so comatose his fellow housemates are wondering if BB brought in his Madame Tussaud’s waxwork by mistake – was so horrified by the Goody invasion that he considered leaving the BB house. Presumably very quietly and deferentially by the front door as opposed to rebelliously and spontaneously like Donny ‘Dorko’ who basically legged it up a drainpipe and over the roof Prisoner Cell Block H stylee. What a punk. Good man.

And if you thought Jade’s ma was gravelly at the top end that’s nothing to the foghorn-leghorn bugling that erupted from her kebab regions the first night in. I swear to God Jermaine turned white (Michael must have been green with envy). Shilpa must be wondering what scummy planet she’s crash landed on.

Ken Russell, however, seems to be taking it all in his stride. I guess there are benefits to being senile and having one foot in the grave. Bet you any money he’s planning a remake of his 1988 film The Lair Of The White Worm with Ma Goody reprising Amanda Donahoe’s role as Lady Sylvia Marsh…

1970’s gibbon-esque funky funsters The Goody's I'm sure would have been a lot more entertaining. If I had been in the house and found myself confronted with Jade's 'gravel-gobbed mother ' and the ' foghorn-leghorn bugling that erupted from her kebab regions 'I would have joined Donny and scaled the wall.