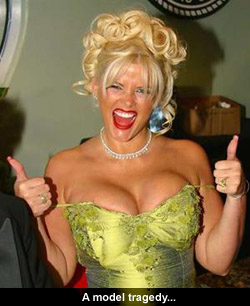 Compelled by curiosity, Karen and I watched Dark Roots: The Anna Nicole Smith Story on Channel 4 last night. It made sombre, sad and oddly solemn viewing. On the whole though I felt the show was largely disrepsepctul, unsympathetic and part and parcel of the awful media circus that undoubtedly contributed towards Anna Nicole’s death.

It’s too easy to see Ann Nicole as nothing more than a stupid, pouty blonde, breast enhanced, coked-up redneck who never ever escaped from the trailer trash po’cracker mindset that she was born into.

Which is all a bit too one dimensional for my liking.

Yes I know she played along with the oversexed dumb blonde image but I have a feeling it said little about her true self and more about the men around her who all, as far as I can see, were more determined to acquire material gain for themselves than to give Anna Nicole any emotional and financial stability (with the exception of her husband, J. Howard Marshall II). Despite the brazen TV and DVD appearances there was something ineffably wounded about Anna Nicole Smith and you can’t help but wonder just what a screwed-up childhood she must have had. Hell, I can hazard a few guesses but let’s leave those floating in the ether, shall we?

The TV show did little to get to the heart of Anna Nicole’s tragedy. As documentaries go it was scrappy, uninformative and merely reproduced the lazy media veneer of Anna Nicole Smith rather than expose her true soul. The interviews with her family and friends – who all, I have to say, looked like damaged stock – merely underlined how ill equipped Anna Nicole was to lead the big boobed bunnygirl lifestyle that she felt was her only route out of Trailer Park, Trashville, Tennessee.

The interviews and media clips were continually interspersed with an awful, fake hillbilly, banjo-based ditty whose lyrics only served to belittle and poke fun at Anna Nicole. Half way through I was entertaining a mad desire to see the banjo player and redneck vocalist tied to the fender of a Texas pickup truck by their small red hairy balls and driven into a gator infested swamp... if only.

Even searching on the internet for a picture of Anna Nicole Smith to illustrate this blog I was shocked to see how many topless, nipple oiled shots there are of Anna Nicole available on the net. You don’t even have to use any “dirty” phrases in the search. Just her name will do it. Is this all she meant to people? Do we think no more of her than a massive pair of breasts and pouty red lips parting provocatively? No wonder she was so unhappy.

Anyway. The overriding feeling I came away with was how sad, lost and continually let down Anna Nicole Smith was by everybody around her. Everybody except her son which explains why his death sounded the death-knell for Anna Nicole Smith herself too. Poor kid.

And that applies to both of them.
Posted by Steve at Monday, April 02, 2007
Email ThisBlogThis!Share to TwitterShare to FacebookShare to Pinterest
Labels: AnnaNicoleSmith, television

As a family we always really liked Anna Nicole Smith and I personally was very shocked and saddened when I heard she had died.I really hope that her daughter has a chance at a happier life.

Poor sad Anna, I liked her... no one could understand why I did, even I'm not too sure, but I think it was because she had guts, she used what she had. She was being used by most of the people around her, and I think she was aware they did, but loved them anyway.