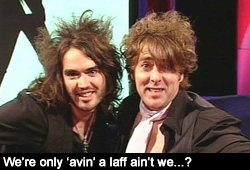 Having been on the nasty end of a stupid prank recently the news that Jonathan Ross and the bandy-legged Russell Brand are currently immersed up to their designer hips in hot water has struck a chord with me far more than perhaps it normally would.

Apparently, on Brand’s Radio 2 show, the pair left “sexually offensive” phone messages to old thesp, Andrew Sachs, claiming that Brand had slept with the actor’s granddaughter, Georgina Baillie (23), and that Sachs might kill himself upon hearing the news.

Hmm. As pranks go it’s pretty pathetic and the kind of thing that any half-baked sixth former could come up with in their wet-dreamed sleep.

Now I’ve done my own fair share of ringing up pubs and asking for “Mike Hunt” in my time but public humiliation on a national scale is something that – even in my selfish “the world owes me” teens – I would have steered well clear of. Forget the swing of a moral compass, surely your own common sense would tell you that this was a bad idea?

Sachs has taken it badly. His granddaughter has taken it worse and who can blame her? Personally I’d rather people think I’d shagged Jonathan Ross than Russell Brand but the poor girl has had little say in the matter.

What is interesting is that the prank was pre-recorded and approved by the show’s producers. The BBC initially defended it… but now that the media tsunami is hitting their sun loungers they are grovelling apologies in every shade of yellow imaginable.

There are calls for Ross and Brand to be removed from air.

Should the pair be sacked? I don’t think so. As much as I dislike Brand (and have waxed vile about his shenanigans before) both of them have been very quick to publicly and vociferously apologize to the public and to Sachs and to his granddaughter for the joke.

Personal accountability goes a long way towards forgiveness in my book.

The gag was ill thought out and the producers – or somebody – should have had the brains to say no. “Sorry lads, this one is (a) just not funny and (b) is just going to result in a lot of adverse feedback – lets just stick to making adolescent innuendoes about the birds we fancy from the telly…”

The producers are just as – if not more – culpable. Maybe they are the ones who should be sacked?

A slap on the wrist, though ineffective and hardly a deterrent to Ross and Brand and not likely to satisfy Sach’s sense of justice is at the end of the day the only sensible course of action. Sacking them will solve nothing. Some other channel will only snap them up and make gold with the furore that they bring along with them.

The deed is done. They’ve owned up and apologized. Time to forget it and move on. It is the only wise way forward.

There are too many shows which depend upon so-called celebrities making fun of people, often the public but also other well-known figures. I hated 'Beadles About' 'Candid Camera' and Noel's House Party (Gotcha Oscars).
It strikes me that if entertainers cannot entertain AND still show consideration for the feelings of others they are doing a pretty poor job. Steve, don't get me started!!!!

I think what was wrong with this "joke" (aside from the fact that it just wasn't funny) is that it left Sachs no opportunity to respond or participate until it was over. He had little choice and nor did his granddaughter. I agree with what you say though - as comedy crutches go this was pretty lame and people rightly expect better from celebrity entertainers.

These two turds are paid millions between them. They are paid by me and you. They are not funny and not entertaining.

They are vile, self-centred, crude, loathesome cretins who have become distant from the people to whom they broadcast. They live in the rarified atmosphere of celebrity, and as such they think they are untouchable. In the BBC which hates all things English, and tries day in, day out to turn us all into rancid left-wingers, they probably ARE untouchable.

Not only should they be sacked, but they should also be prosecuted for outraging public decency.

And your pay-off delivered without any sense of irony...

But your point about their salaries is a good one - is this what we pay our TV license for? To have Wossy and Brandy-Randy deliver substandard crank calls? The entire gag was juvenile and somewhat cowardly. A comedy hit-and-run... ooh let's leave a message on his answer phone. I used to hate "Beadle's About" but at least the various targets of the jokes had an opportunity to have their say... and most importantly, to give their permission for the gag to be aired on TV later. Unbelievably I'm grateful to Carol McGiffin for raising this last point on Loose Women this afternoon. I need to get out more...

I've always felt Brand lacked charm and brains; Ross I thought had both and could get away with a lot because of that. Now I'm not so sure, because this was pretty tawdry. Anyone can be a complete dickhead. For our money, they ought to deliver more. (God I sound like an old fart!).

Sadly, I reckon Ross's viewing figures will be through the roof this Friday with people tuning in to see what he has to say on the matter.

As for Brand, well I'd just sack the douche bag anyway, irrespective of his comments to Andrew Sachs.

'Edgy' is the preserve of comedians who aren't actually funny.
I can do edgy, I can do obscene, but I can't do comedy.
Me and Russell Brand both, it would seem.

Mmm, Brand and Ross aren't exactly good role models for our kids are they?

Sigh, they don't make presenters like they used to... give me Dave Lee Travis or Simon Bates any day!

I can't abide Jonathan Ross. He used to be really funny but I had to stop watching his chat show when he started to turn into a leery old man.

Hi Brother T, yeah, the fact that Brand has besmirched his character leaves me shrugging but Ross I am actually disappointed with. He's let me down, he's let the nation down but most of all he's let himself down...!

Inchy, I'm sure you'd talk a lot more sense than Brand. There is far too much importance placed on "edginess" these days and without the (a) the comedy and (b) something worthwhile to say it is just an empty gesture. Certainly not worth paying license fees for. Frankie Boyle - now there is someone who is edgy but is a comedy genius and has plenty to say to boot.

Hi Annie, I can't listen to Simon Bates without thinking of the nauseating "Our tune" I'm afraid... myself I always preferred John Peel and Annie Nightingale: now they were class DJ's!

Hi Nora, yeah someone needs to have a word with Wossy that the innuendo stuff only has a charm when you're young and attractive... otherwise it's like being unwholesomely pawed by someone's dad...

Good for Andrew Sachs that he complained and was open about how he felt.
Many people would have been tempted to laugh and pretend to be a good sport - just encouraging the multi millionaires to carry on with the same bullying behaviour.

It is bullying, Kaz - it always annoys me when jokers attempt to take the high ground by proclaiming: "Oh for God's sake see the funny side", totally dismissing the other person's feelings as redundant or not relevant simply because it suits the needs of their niggardly conscience. If someone is hurt, distressed or angered by a joke then the joke is a bad one and requires an immediate apology. To be fair to Ross and Brand, at least they have done this. I wish others were as forthcoming with taking responsibility for their actions.

I think the whole thing has gone a bit too far, they deserve a slap on the wrist and as long as they've made their apologies then they should be given a few weeks to let it all settle down then get over it. Bizarrely Brand has actually slept with Sachs granddaughter so he wasn't lying about that !

with everything i have heard and read about this...i think the producers are more responsible as this was a prerecorded message and they had the choice not to air it...all in all i think it was pretty juvenile and a big deal is being made over a joke...but then who am i to say...

Yeah I heard that too, Andrew - at least Brand can't be sued for libel!

Daisy, I totally agree. I can't believe there's so little else happening in the world that the newspapers are all feasting on this so much. And to think our PM even commented in the incident too! Hello? Gordon? Haven't you got other more important things to be doing? Personally, I think the "public outcry" has got less to do with people's feelings of decency being offended than a pleasurable desire in watching two privileged personas being dragged down...

Sadly it has even made the news here, but considering me've got a general election next weekend I guess anything to break the monotany eh?

Hi Amanda, I suspect that may be the thinking here too. Stops people thinking about the credit crunch and the recession... we can rejoice in the fact that Brand has resigned and Ross has been suspended. Makes a huge difference in my life, it does...

I hate to sound like an old bag but where's the humour in someone else's humiliation? Part of the reason I stopped listening to the radio in the mornings was the huge number of wind-up shows that used to be on - how is it funny to unnecessarily stress someone out by telling them their car's been crushed (etc)? Possibly bottom of the food chain are the people who send in videos of their spouses/friends/children etc falling off things and evidently badly hurting themselves... HANGING'S TOO GOOD FOR THEM!!!!!!!!!! Wiping the spittle off my PC screen I salute you. Oh, and I completely agree with Brother Tobias.

Lucy, a good old fashioned spleen vent is very therapeutic and most PC screens come up lovely after a bit of spit and polish... glad to have been of service!

Years ago I owned a thing called a "tellybrick" - a lifelike rubber housebrick that could be thrown at the television screen with no risk of damage. It got lost, sadly, in one of several moves.

I remember such a thing, Dominic. For some reason my mind associates it with Noel's House Party...