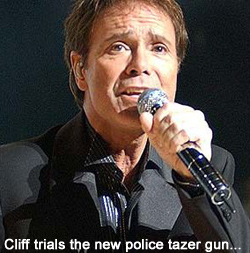 In a move that will probably prove to be as unwise as John McCain choosing Sarah Palin as his running mate and simultaneously start the blog world’s most shortest lived meme I hereby pose the challenge:

Name your most embarrassing record / CD ever!

You know the kind of thing.

You were young / old. You were feeling impetuous / temporarily insane. You had the money spare and you just thought, “What the hell, Shakin’ Stevens has never looked so good...” and before you knew what you were doing you’d done the deed; you’d bought IT – the single or album that for a short while was a guilty pleasure and then with the passing of time just became a source of unpleasurable guilt. The record that you store secretly in a separate place from the rest of your collection just in case visiting hands chance upon it in the midst of your other far cooler musical acquisitions.

The record that will lose you friends, family, hairdressers and influence people in a bad way.

Mine is “Wired For Sound” by Cliff Richard.

I know. I know. I feel like upping the challenge a bit more and yelling, “Yeah! Beat that!”

Let’s get one thing straight. I hate Cliff Richard. I loathe the man. And I am at pains to point this out to absolutely everyone that I meet. Every time I see his sanctimonious, tea-stained leather face staring up at me from a magazine or newspaper I just want to vomit. And as for his singing voice... that “Oh I’m so sincere” warble makes me want to gouge a hole in space and time and chuck him into it.

But “Wired For Sound” in my opinion is a great record. What can I say? It’s a really catchy melody. It’s got great hooks littered all over the place. It wasn’t written by Cliff. Maybe this explains it?

And can I just add that liking the record does not mean I enjoy watching the video. The video – Cliff gliding around on sparkly roller-skates like a terrified geriatric tied to a conveyor belt of death is not the stuff that great music videos are made of. I hoot with vicious laughter every time I see it.

But I do have the song on my MP3 player. And I have been known to listen to it whilst pootling my way around town.

OK. It’s done. Hate me if you must. Revile me if you can but the gauntlet is thrown down.

I now challenge Inchy, Rol, Tris, Reluctant Blogger, Brother Tobias and The Sagitarian to name their most embarrassing record of all time. Usual meme rules apply: pass it on, let other victims know they’ve been tagged and then wash your dirty musical laundry in public.

Go on. You know you want to.
Posted by Steve at Tuesday, November 04, 2008
Email ThisBlogThis!Share to TwitterShare to FacebookShare to Pinterest
Labels: 80s, cliffrichard, eighties, embarrassment, music

You know, I think I probably answered this back in my mammoth My Life In Music post. It would either be (depending on your views) Bruce Willis' Return Of Bruno album (which I would still listen to, without apology)... or Kylie Minogue's I Should Be So Lucky (which I wouldn't).

I'm not sure I have anything else to add to that... but if I think of it, I'll let you know.

I also own this single and, more worryingly, I used to think Cliff was cool on those skates.

Rol, I would say that Kylie counts as the most embarrassing record out of the two... but then again, Kylie does have an amazing amount of kudos. Maybe I ought to be embarrassed by the fact I don't own a single Kylie record?

Inchy, it's nice to know I am not alone recording this single. But thinking the skating malarky was ever cool is a dodgy as hell!

I didn't buy the record but I did see The Dooleys at the Sunderland Empire. Now, that's embarassing.

haha I see you couldn't bear to link the youtube video though.

Dear me. I can honestly say I have always loathed that record. I do own one Cliff record: "Carrie" but I don't think he wore rollerskates for that one.

I will of course take up your challenge.

Oh Steve, you're such a meanie, I LOVE Cliff and have seen him in concert several times. Admittedly I was sick at one of them, but I put that down to being pregnant (not by him I hasten to add). Yes, "Wired for Sound" is a great track!

Most embarrassing single.. mmm... probably "One Two Three O'Leary" by Des O'Connor - but I was only 10 and had just seen him playing Buttons in Cinderella (1970)

Ha ha! Nora - I recall the Dooleys well... or am I confusing them with The Doobie Brothers? Either is very embarrassing!

Gina, I suspect that most people own a Cliff record - he has been in the business for 50 years after all - but I'm greatly looking forward to reading about your ultimate record horror...!

Ah Devil Woman - at least it wasn't Dicka-dum-dum or whatever it was called. I think the fact you were sick at a Cliff concert is pretty cool - a very succinct gig review but then I'm sure you'd disagree...!

Thanks Steve...I'm still on a catch up for the last tag!! (Which I'm working on, honest.) Actually I saw Cliff in concert here once when a friend of mine gave me tickets for my birthday (she died before she could go with me tho'...and I just KNOW you're thinking some people would do anything to get outta a Cliff concert. However, I digress - I was charmed completely by him. Dunno about now tho')

Steve, Steve, how can you say the Doobie Brothers are embarrassing? They are legends! Beginning as the voice of Californian Hells Angels, they became icons of urban cool, a chill-out vibe for thinking dopeheads. Why, many's the time...

As for my most embarrassing record, it's 'Little Arrows' by Leapy Lee. I don't know what possessed me. It may have been exam pressure or hormones or lead pipes. I still have the 45 as a testament to my shame. I fear I may win with this appalling song. But I was young...

Amanda, I have never doubted that you are a lady of discernment and taste but on the matter of Cliff I really cannot accept that you were "charmed completely by him" unless you were under the effects of copious amounts of alcohol or chemical substances of such volume and potency that you could have flown three times around the South Pacific without the aid of mechanical contrivances, combustion engines or fossil fuels...

Brother T, your knowledge of The Doobie Brothers is plainly expansive whilst mine resembles that of the surface area on the back of a penny stamp... hence I have no right to dismiss them as "embarrassing" whilst you have every right to bestow the accolade of "cool" upon them. I bow down to your superior knowledge. But please do not ask me to listen to their records...!

However, I have a mind to track down Leapy Lee as I have never heard of her/him before. Any relation to Looby Lou?

Hey Steve, I've confessed all and can feel any vague coolness I may have retained ebbing away fast...

Bye Steve
It was nice knowing you.

Tris: what was this "vague coolness" of which you speak?!

Kaz, don't go yet... I've yet to reveal the delights of my embarrassing magazine collection...

Do you think that was a metaphor (on Sir Clifford's part) for something else?

Steve, I think you have NOTHING to be ashamed of in professing (or rather confessing) to like that track - I remember it well. The video with all the dudes and dudesses on skates. And wasn't it a song that put Sony Walkmen and the like on the map?? The precursors to iPods no less... And as you say the melody was actually rather good! (Okay I AM an Old Cheeser so what do you expect?!)

And if I'm allowed to chip in, one of my most embarrassing record ever was probably "Mirror, Mirror" by Dollar. Or, "The Dollar Album" - the latter which I purchased in my mid 20s!! Gasp. It's all coming out now ...

You may chip in anytime, OC - this meme would have been / is perfect for you and I was very tempted to tag you but felt it would be wrong to "nag" you into producing a post - but I'm very glad to see you here! You're right regarding the Walkman - strange to think that Sir Cliff was at the cutting edge of technology. Maybe he should have reissued the single to help sell the iPod? He missed out on a great marketing trick there!

Ah Dollar - yes I remember them and must confess to being a "poppy" young thing when I were a lad and liking "Mirror Mirror" too. I seem to remember liking much of the dross that made it into the charts in the late 70s / early 80s. I even quite liked some of Bucksfizz's output until my mind started to be gloriously corrupted by punk, new wave and indie rock.

Could be a cousin! And to save you the trouble, pour a stiff drink, make sure there is a bucket to hand, and make sure no impressionable young are within earshot (lest it becomes their favourite song and you have to leave home).

Thanks for the link, Brother T, I shall be sure to check it out this evening (my loins duly girded)...!