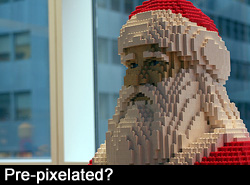 You may (those of you who have not indulged too much in the warm liquid pleasures of mulled wine) recall that before Christmas I was performing a mull of a different sort - no, not Kintyre - but musing on the chances of Tom being ill over Christmas due to the effects of his second MMR vaccination.

Well, true to form Tom became very grouchy over Christmas Eve and steadily worsened as the evening drew on. Nothing too serious I'm relieved to say but it did mean Karen and I were extremely lucky if we managed 3 hours sleep that night... which made for a very blurry eyed, barely human Christmas day the morning after.

I must admit I was a zombie for much of the day and seemed to spend much of it trying to distract Tom with all the new toys that he wasn't at all in the mood to enjoy. Ho hum. Despite that though it was a good day. I suspect that when I look back on it the stress and worry over Tom will magically disappear and instead all will be basked in a tinsel glow of chicken cooked in goose fat and marvellous giftage of the superlative sort. Selective memory is a grand thing.

Thankfully Tom's reaction only lasted 24 hours and after a good night's sleep for us all on the 25th Boxing Day dawned bright and sunny and it felt like Christmas had finally arrived - a day late but no matter. Tom had a few presents left unwrapped and piled into them with gusto. That's the spirit!

The rest of managed a good haul too. Ben received a Nintendo DS - and has virtually had his nose pushed into it's shiny smooth screen since unwrapping it 2 days ago. The silence is a real novelty.

I showered my wife (steady, boys!) with gifts a-plenty including a fabulous peredot necklace, choice DVDs and books to entertain, educate and delight.

And as for yours truly... well... Some of you may recall a post from earlier this year. Namely this one.

Yup. You guessed it. I got it.

My wife is simply the best. And I'll fight any man, woman or reindeer who says otherwise.

i am so glad you had a lovely time (sans the illness)...and were able to spend at least a lovely boxing day with your family...all the best for the new year!!!

Thank you, Daisy - wishing you a very happy New Year too!

You are sure that wasn't intended for Tom ...aren't you?

Kaz, if the labels get swapped around in Santa's workshop it's hardly my fault...

ha!!!
you got your lego wish!
how awesome is that? karen is really so fabulous.
happy post-christmas lego-ing (it's not back in the box yet, is it?) X

Kate, it's not even out of the box yet - I haven't managed to garner enough time and energy yet to build it! ;-)

But is the Death Star or the Santa? I'm confused!

I wouldn't dare - any wife who gives a man a death star for Christmas (is she trying to tell you something?) is a woman to be reckoned with indeed!

Dotterel: the death star is now out of its box and Santa is out of his tree. Or something.

Laura: good point. Any planets you'd like removing from the night sky?

Let me know when you've finished it, and I'll curl up in a rotating turbolaser turret and hibernate until the daffodils appear and the lights come back on in the High Street...

You may have a long wait Brother T - it's a biggie. Took me an hour just to assemble the minifigures... it could be summer before it's completed (curse those rebel scum!)

Good wife you've got there, Steve. Almost as good as me :)

A Lego fascination, huh? I believe quite a bit of the Mall of America (aka Hugedale) is dedicated to an enormous Legoland area...

Glad the Boy is feeling better and playing with his new toys -- and you're right: eventually, you will not recall the crabbiness or the grubby little hands. Which is both a good thing and a sad thing...

A happy and properous new year to you!

What a fabulous present! Hours of harmless fun....
So glad you managed to enjoy xmas despite the illness!

thanks Justme - and I'm still no where near finishing it!

Will do my best Laura but I might become unpopular with those that rely on tidal flows... but hey, what do they matter at the end of the day?