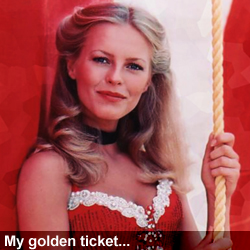 It’s been a while since someone has hit me with a meme. And a lot longer since I’ve opened the sash window on my ivory tower, looked out and deigned to reply. Today then is a special day.

For this meme, I have Tim to thank over at Bringing Up Charlie. I’ve been set 10 questions which I have to answer or a stern school mistress will spank my bottom to within an inch of snapping the elasticated waistband of my Y-fronts. I must then set my own questions and pass them on to some other poor unsuspecting blogger who will have to take a break from composing their current blogging manifesto to answer them.

Here then are Tim’s questions and my answers:

1. If Hitler had won, Goebbels had none and Franz Joseph was blessed with three, what was the score after extra time after the match had gone to penalties?

A. 4-1 to Germany and the English football team sent home in disgrace to be pilloried on the streets of every major UK city before having their legs broken, sawn off and used as golf clubs by fat, retired London Palladium comedians.

2. How is it that a calendar - which had no moving parts - can, unlike a stopped clock, still record the passage of time?

A. It doesn’t. It merely represents graphically a set number of days which require a human agency to interpret as the passing of time. Also, may I remind you, that a stopped clock is correct twice a day? More pertinently why won’t my knackered old VCR record the dodgy German channels on Cable?

3. Is the King of France bald?

A. Possibly not as research seems to suggest that human hair is one of the last things to decompose. It is unknown whether he sported a Brazilian.

A. Oxygen. Pure and simple. Oxygen filters or reflects blue light or something. Google it.

A. In the minds of the faithful, yes. The question should be: does God exist as an independent, omniscient entity? To answer that question I may have to die. How badly do you want me to complete this meme?

7. What is the meaning of life?

A. To evolve both physically, mentally and spiritually both as a race and as individuals.

8. Why do flies always find a way through the smallest of gaps even though they've got the entire WORLD to fly around, yet find it impossible to find their way out once they're in your house?

A. They are lonely and just want a quick kiss and a cuddle before they leave. No tongues please.

A. No, blogs are now. Only tomorrow is the future.

Well, I consider that exam well and truly passed. Now for my ten questions – and I am going to tag the following: Gappy @ Single Parenthood, Fran @ Being Me, Heather @ Notes From Lapland and Kelloggsville.

1. God gives you a free ticket to spend the night with absolutely anybody in the world and the entirety of history – whom do you choose?

2. Frankie Howard or Frankie Boyle? (This is a separate question and is not related to no. 1 above.)

3. What life skill or ability do you wish you possessed?

4. If it takes Johnny three hours to fill a bath with water using a colander and a train travelling at 90mph takes 2 hours to reach its destination why does Britain no longer have the right to call itself Great?

5. Have you ever genuinely wished to be a member of the opposite sex (or are you that already)?

6. Do you have any embarrassingly weird interests or hobbies – and if so please explain in detail?

8. If you could change anything about your current lifestyle / life situation, what would it be? And what would you keep?

9. If you were a packet of crisps what flavour would you be?

10. Describe the sandwich of the gods.

And just to prove that I never ask people to do something I wouldn’t do myself here are my own answers to the above:

2. Tough one this. I like both (ooh! Nay, nay and thrice nay!). Mr Howard definitely in my coy youth but Boyle takes the biscuit now that I am cynical and politicised.

4. (A) We were ruined by Thatcher. (B) The dismantling of the NHS. (C) The growing cult of celebrity for celebrity’s sake and (D) No proper discipline in our schools.

5. Only when I was 15 and desperate to know what a pair of breasts felt like.

6. Y’all probably know this already. I am a dedicated fan / collector of Lego and have a collection worth over £10k.

8. More income, less outcome. I’d keep the wife and kids. And the Lego.

Right, over to you! If anyone else fancies having a go... go ahead and fill yer boots!

Thanks, pal. I think.

Steve,
With all due respect, I must disagree about the answer to number 7.

Every right minded Englishman must know that the meaning of life is... is... 42.

Owen: much as I love the Hitchhiker's Guide, I loathed Level 42 therefore I cannot accept 42 as the meaning of life. 41 possibly - as that is the age I will become next month. But 42? Never!

Well done Steve... passed with flying colours - a tutu at the very least, or possibly a ra-ra skirt, but what you choose is your own business.

ney, ney and thrice ney! Age 42, and yes the world does start to become a clearer place... except for the bees,too weird ;)

The Dotterel: no it was oddly pain free and rather enjoyable. A tutu is fine. But not a Desmond please. Not sure I could cope with sermonizing this early in the morning and I'm not sure he'd approve of my first question.

Suzanne: the birds and the bees... yes, that was always a weird concept. Imagine my surprise when I took Biology at school...

It seems to me it is excellent idea. I agree with you.

Anonymous: do you? About what? The meme? My views on religion? Or my wish to go back in time to the 1980's and have my end away with Cheryl Ladd? I'm confused.

V v funny. Your warped sense of humour appeals to me greatly.

Are you free on Thursday to elope?

LCM: I came up with three potential answers...

2) Things To Achieve Before I Die; item 7) get propositioned on my blog - ticked.

Thoroughly enjoyable post. But my faaaavourite bit was imagining that sandwich. On white. Takes me back to the good old chip/bacon butty days of youth when my northerner granddad would clog our arteries with the finer carbs of life. Or refined carbs. Oh, whatever.

Loving your work, anonymous. Gee, he gets around, that one.

I think I'd probably be prawn cocktail although I'm not sure why.

Cheryl Ladd? She doesn't do it for me. Which is good cos I doubt that you'd want to share. I'd definitely have Audrey Hepburn. Sigh! She was just so gorgeous in her heyday.

Being Me: occasionally I still treat myself to a chip butty (a double layer of chips). There's nothing quite like it. An instant hit and you feel full for the rest of the day. In fact you may not have to eat for another 24 hours. See, it should be on a diet plan - the chip butty diet!

I'd love to know what Anonmyous does for a living...

Gina: one of my aunt's is a long distance cousin of Audrey Hepburn. Sadly the glorious Audrey's good looks didn't find their way into my DNA... :-( As for sharing Cheryl Ladd... perish the thought! It's bad enough we'd have to play Rock Paper Scissors to decide who gets Keeley...!

She's awfully pretty isn't she. I think I must be blonde at heart.

CJ: at 10 years of age I wanted to do things with that woman that I wouldn't fully understand until I was 15. Thank God for reissues on DVD... though I now watch her with far less innocence than I had back then.

Thank you for not nominating me.

Because of that, I will now proceed to answer your questions...

Rol: I did seriously consider it but then decided I wished your patronage of my humble blog to continue. Your escape was due to entirely cynical reasons.

Plus I knew if I didn't nominate you, you'd do the meme for sure. Reverse psychology, see? ;-)

Insane, but fun! Was she the one who replaced farrah Fawcett? Or the other way round? Ciao. A.

Lunarossa: she replaced Farrah Fawcett's character, Jill Munroe, as her little sister, Kris, in the second series and remained for rest of the show's 5 series run. By far the best angel in my book, Kris, was the petite sporty fun loving angel who featured in the show's opening credits dressed in a tiny bikini. It made a huge impression on me obviously...!

Gosh, Steve, you sound a bit like me when I drool over George Clooney...Well, non exactly over him...Any idea how does Cheryl look now? Is she ageing gracefully? Ciao. A.

Lunarossa: she's still looking hot in my opinion and has her own website here if you're interested. Growing old very beautifully I'd say.

Oh you absolutely need to write more memes. This beats the hell out of "pick the 4th picture down in your file and post it". It's the bees, uh, knees!

Wanderlust: why thank you. I shall take that as a commission and see what I can come up with! ;-)

Dodgy German channels on Cable, which ones might they be??

I think, that you are mistaken. I can prove it. Write to me in PM, we will talk.

Anonymous: PM? As in afternoon? Prime Minister? Or the BBC news programme?