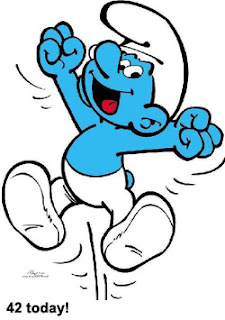 Yes we took the kids to see The Smurfs movie.

Yes I have a Smurf collection.

Coupled with my Lego obsession it possibly makes me the saddest person on the planet but given that it is my birthday today (42, thank you for asking) I believe I have immunity from derision for today at least.

I would like to point out that I am not jumping on the Smurf bandwagon here. I didn't think to myself, oooh, there's a Smurf movie coming out, let's invest in some merchandise which might be worth a bob or two on Antique's Roadshow in a year or two. My collection predates the Smurf movie by a number of years. In fact, when taking my first ever Smurf into consideration (given to me by a boyhood friend whose name forever escapes me - ungrateful, I know, but it was just a frigging Smurf for Heaven's sake; it wasn't like he asked me to marry him. Hmm. Note to self: I wonder if you can actually buy a 'Frigging Smurf'?) my collection is actually a good 30 odd years old.

I'm not sure where my fascination with Smurfs truly lies. I have vague recollections of seeing some of the cartoons as a kid. But even then I knew they were never really cool. But that was me all over. Not cool. Not ever. When other geeks my age were into 2000AD I was into The Smurfs and Peanuts (and, indeed, boast a decent collection of Charles M. Schultz's works).

I guess there is something soft, warm and comforting about the works of both Peyo (creator of The Smurfs) and Charles M. Schulz that appealed to me as a kid. I was always a wimp. More Walter The Softie than Dennis The Menace.

So did the Smurf movie rekindle warm feelings of childhood?

Not quite. It was sweet and schmaltzy but I've suffered far worst. The animation was cool. The kids loved it and found it funny. And Hank Azaria - he of the incredible cartoon voice - plays an absolute blinder as Gargamel... even if he does frequently slip into Moe from The Simpsons from time to time.

Whoa. Just re-read that last sentence and it plainly came out very wrong.

I suspect there is a part of me desperately trying to hold onto to some sliver of childhood innocence that I never really possessed in the first place.

It's my birthday today and we're taking the kids to see Cars 2 3D this afternoon. I'm regressing. I'm revisiting / reliving my childhood. There is something liberating about it. The time to be a grown-up will resinstate itself again all too soon, I suspect.

And before you ask, yes, I did get a Lego set for my birthday. I'm a happy boy.

My thanks to all of you who have sent birthday wishes on Facebook et al. You've made me feel Smurfing special.

Happy Birthday old chum. I wish you a lego-tastic time, and a great day with the family. All birthdays should be on a Saturday!

Thanks to you some daft song by a group involving Beaky Titch and someone about Smurfs robbbing a bank has reared its head from the long dead past and is driving me mad.

Happy birthday. I also have a smurf collection that would be about 30 years old. Including a house and garden fencing! Do you have any swaps? (that's a really sad question isn't it lol)

Happy birthday! Which Lego kit did you get? My son will apparently perish if he does not get the large jet plane soon. Curious to see what you think of Cars II. We saw it a couple weeks ago and I was less than impressed. I generally love Pixar.

Löst Jimmy: or at least during the holidays... which is how I always engineer it!

The fly in the web: Smurfs robbing a bank?! Sacrilege!

Kelloggsville: sadly I do not - my collection doesn't sound half as advanced as yours. What I would say though is hang onto them - if you do a quick search on eBay you'll see that classic Smurf collections go for rather a lot of money these days. Seriously.

Wanderlust: no plane for me - one of the Earth Conquest sets instead! Cars... yes, I quite enjoyed it but I think it was quite grown up for my 3 year old and seemed quite long. Not sure he really got the espionage thing at all. He seemed much happier with The Smurfs!

Happy birthday, Steve. You've just reminded me about my own childhood Smurf addiction. I'd forgotten all about those little blue buggers!

Rol: I knew I wasn't the only one! Not sure if your admission makes me feel better or not...! ;-)

I can't relate to the Smurfs, having not been allowed to watch any 'silly nonsense' as a child. The odd Scooby doo was the nearest we got, and only then when our mother was too distracted by a telephone call to wrestle us from the TV!

Many happy returns to you though Steve! Lx

Happy Birthday to ya! It`s my sister`s birthday today also and she`s one year older than you. I could be your big sister!!Also, she didn`t go to see the new Smurf movie but she did go to Mumbai for a month to teach (just got back today with some fabulous Indian tales and pictures) because it was part of her 5-year plan. Anyone else around here got a 5-year plan?

Laura: you have missed out on the blue sublimity of the Smurfs... not to mention the wisdom of Papa Smurf. ;-)

Nana Go-Go: to be honest if I get my head together enough to form a 5 day plan I'm winning. ;-)

What was the role of Smurfette? She got surprisingly little attention for the only girl in Smurfland. I think you should be allowed to take her picture to bed on your birthday.

Happy Birthday Steve - and you are a Leo too, Roarrr. Don't have a clue about Smurfs myself though I'm pretty sure that one has surfaced in my massive house clearing project. But the uncool aspect of it I completely relate too. Lord of the Rings was my youthful loneliness. Not cool in rural NZ in the 70s - a bit ironic that. Anyway I think it's very cool that you get Lego for your birthday at the age of 42! I hope you share it with your three-year old.

Happy Birthday, Smurf Away! Now I remember, there was one good thing about becoming a parent, it was revisiting all those childhood movies.

Happy, happy birthday, Steve. I hope you have a great many more!

Happy 42nd, Steve, you young slip of a thing!

I've just entered a competition, supposedly "just for kids", to win the complete LEGO Star Wars range... and I'm a little over ten years older than you! Girls mature into women but we fellas never grow up is what I think I'm trying to say!!

John: I won't hold it against you. It's not the Smurf way.

Gorilla Babanas: she was Smurf bait. Literally. As for taking a picture of her to bed... I don't think that would be a great idea. I think their might be compatability issues with a girl who is only "3 apples high".

Jeneane: the Lego never gets shared. My boys have their Lego. I have mine. Thems the rules. ;-)

The Crow: thank you! Me too - there's a lot of Lego out there.

TimeWarden: it's the Peter Pan syndrome. And where the hell is this competition?!

The competition was in last week's TV Choice!

TimeWarden: dammit! That'll teach me to stick with the Radio Times!

I must say the Smurfs hold no appeal to me at all, I barely remember them from my own childhood, I guess they were there in the background but I never noticed them (much like the Bay City Rollers...)

Interestingly (or not) they are called Pitufos in Spain. Why? God only knows!

Hope you had a great birthday. x

Very Bored in Catalunya: I did indeed, thank you. A couple of good movies and a good meal out. I'm looking forward to doing it again next year. ;-)

happy birthday and I must look you up on facebook!

Amanda: thank you - and make one for me; I could do with one!

Vicky: thank you - please do!

I saw the Smurf movie and thought it was brilliant. only wearing those 3-D glasses gave me a blinding headache. Also....Does anyone know what Father Abraham who did the smurf song is up to these days?

EmmaK: now there's a name from the past - Father Abraham. Not sure what he's doing at the moment but Wikipedia says he's 75 and still alive. Probably popping blue pills and watching his own Smurf bob up and down in his lap...

MMM: you're a woman after my own Smurfin' heart!