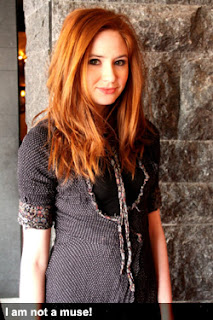 It was the pressure. It was fear. The motivation was stinking lily-livered terror.

It was announced last night that Steven Moffat – Doctor Who script writing major domo – has announced that the next series of DW will be the last to feature Amy Pond and Rory Whateverhislastnameis. They’re going to be written out via a “heart rending storyline”.

But because I was planning to write a DW script in the New Year centred around Rory. I had it all planned out and everything. A nice WWII story set around the D-Day landings and featuring Rory’s (about to be invented by me) grandfather. I’d even begun to research odd happenings on D-Day so that I could have used a weird happening as a plot device to shoehorn The Doctor into proceedings.

But no. The uber-work has been nipped in the bud. The rose has been cut before it could bloom. My plans have been scuppered. Sabotaged.

Moffat heard about my plan. He must have. It’s the only explanation.

“Christ on a unicycle,” He probably said. “Steve is going to write a script and send it into the Beeb. The game will be up. I can’t withstand that kind of competition. I need to pull the rug out from under him.”

And thus he hit low and hard. Removed the two characters that were integral to my plot.

Karen Gillan I am sorry. I am so truly sorry. I feel so responsible for your having been written out of the show. And Mr Rory Actor (I can never remember your real name) I would have made you a star. And I would have learnt your real name off by heart. It would have been a fabulous story. Worthy of being the 2012 Christmas special.

But now I’m going to have to wait until after the next series. See who the new companions will be. Adapt my story to their personality and the way they speak. It’ll be 2013 at the earliest.

Because I’m not giving up. You hear me, Moffat? You ain’t off the hook yet!

I’m coming for you and there won’t be a Tardis big enough for you to hide in!

Sorry for being undermined in such a scrullious fashion by Moffat. A desperate move by an obvious frightened man it would seem.
As for Pond's departure, I am quite sad, but there is light...for Pond there is room in my Time Box for you (bring that kissogram Police uniform and I guarantee you safe passage through the Universe etc. etc.)

Löst Jimmy: I may have to stow away in this Time Box of yours. It'll be fine. You'll have a police officer on board who can apprehend me.

How about putting a spanking scene in the new episode you're going to write? You've got to think outside the box if you want to stand out from the crowd.

Gorilla Bananas: you might be onto something there. Maybe I could talk Karen Gillan into coming back to make a guest appearance?

You realise your whole protest was nullified by the comment below:

"Not just because Amy has been the best DW companion since Donna Noble."

Right, we need a filmed documentary of your pursuit of Moffat...he cannot escape...you have followers worldwide to assist you...

The fly in the web: my method of pursuit will require lunch for two at The Ivy. Better start a collection...

Again, view this as an opportunity rather than a set back. Imagine all the other "Story lines" scenarios that you could pitch to her not just sci-fi related. Some of which she would almost keep her clothes on!!

Joe: hmm, yes. Apart from the ones that require "special" costumes.

Looking forward to a parallel universe with Dr. What?

Well she sure doesn't look a muse(d) either. I don't know what the blazers you're on about in this post! (I haven't watched DW since the cardboard box "exterminate" robots days.... and that's possibly why). Sorry. I continually disappoint friends and acquaintances with that fact but there you have it. Cast me aside if you will.

Steve, this desperate attempt at trying to rationalise your pain at the thought of losing Gillian is worrying. Can I suggest you visit the Doctor asap.

Being Me: cast you aside? Never! A good soldier never leaves a man behind!

Marginalia: the Doctor says he can't spare the time to see me. Something about saving the universe.

It is indeed a shame, do the Beeb not know what they've missed out on? Although you could work a script around Merlin, perhaps starring a red-headed leggy wench and a Rory-whats-his-name?

I won't let him hide in our TARDIS I promise...I have never warmed to Amy but do like Rory...infact I think Rory would be a good companion. I HATE RiverSong, she is uber annoying and pointless.
But that may be because I spent the weekend watching Jon Pertwee and The Spider Planet re-runs on DVD.

Amanda: I have to confess that I am a huge River Song fan. Mainly because she is played by the superlative Alex Kingston. I quite like Amy but agree that Rory is a terrific actor and it will be a waste to lose him.

There comes a time in every man's life, where he has to understand there are three things that are not eternal, but are instead fleeting and temporary; his youthful waistline, his verdant hair line, and his favorite Dr. Who Totty...

Write the episode anyway, it can still serve as a great calling card script with other companies.

Because, industry insight here... the Beeb won't read any script based on one of their shows ( except Eastenders, Casualty or Doctors ) in case it has a storyline in development that is similar and lays them open to future lawsuits. No matter how brilliant, your Amy and Rory storyline wouldn't have got any further than the front desk, Sorry.

But.... It is submission time for the Red Planet prize at the moment...

( And sorry it has taken me so long to read Danny Houdini, work got in the way... but on it now )

Keith: thank you for the insight... makes me feel marginally better. Hope you enjoy Danny...!

No, I'm sorry but I for one have to disagree. I'm rather pleased that Amy Pond is off. Bit sad that Rory is going too but Amy can't go too soon. She's a bit too cool for my liking, looks too good in a mini skirt and has rather too nice hair. No, I for one, can't wait to see the end of her. Then, if Mr Moffat could just bring back Mr Tenant .....

Selina: "looks too good in a mini skirt"??? I'm sorry. But can those words even be used in a sentence like that?

You tell him, Steve! You GO!

Livi: Me and Moffat. Fight of the century. And you've got front row seats!