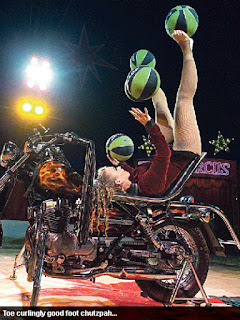 I don’t consider my childhood to have been deprived but I’ve always been aware that there were some things that other people did, experiences other people had, that I missed out on.

Sure, back in the day, circus shows used to be shown on television, so I knew what a circus was and could extrapolate an imaginary experience from the visual I saw on the TV screen: people sitting in a ring beneath the humungous big top; the caged magnificence of the elephants and lions; the dazzling troupes of garishly dressed trapeze artists and the rowdy explosion of clowns with their falling apart car. But watching the spectacle from the familiar comfort of one’s own living room is not the same as being there in the flesh and feeling the crack of the Circus Master’s whip igniting the air in front of your face.

So when Billy Smart’s circus advertised their latest appearance in the nearby town of Warwick Karen and I decided we’d take our boys; effectively give them the experience I’d never had as well as right a wrong on my behalf.

And what can I say?

Circuses have plainly changed from those that I used to watch on the telly. The elephants and lions were gone. We didn’t even have poodles dancing on spinning balls. This is probably a good thing as the last thing one wants when going to a circus is a moral dilemma. The clowns and their custard pies and their ever-collapsing car had also bitten the dust. I daresay the pincer movement of Stephen King’s It and The Simpson’s Krusty had hastened the end of the traditional clown. Instead we had a physical comedian who, like a Mr Bean or a regular mime artist, “filled in” with pratfalls and childish sign language while the backroom boys hefted the safety nets and the props around between acts.

And despite the Circus Mistress – Miss Yasmin Smart no less – proclaiming the circus’s credentials from the heart of the big top and tracing her own lineage back to a Stetson wearing Billy Smart, I couldn’t help but notice the proliferation of Eastern European circus workers who filled every nook and cranny and made me think I was about to run into Roger Moore’s creepy 007 playing a dodgy version of snap with a simpering Jane Seymour. But hey, the circus performers themselves were an international lot – an Argentinian bolas wielder who looked like a long lost member of Kiss, a French foot juggler with the most amazing thighs I have ever seen (I swear to God she could have rolled a cigarette between her thighs and inserted the roach without using her fingers), a haughty looking trapeze artist troupe who looked like they’d rather be throwing knives around rather than each other and the “Xtreme Brothers” who proved their strongman credentials by hefting each other around in borderline-obscene three-man pyramids, the configuration of which often made the eyes goggle and one’s goolies water.

But I have to say I loved it.

I was actually at a real life circus and felt like a kid again.

And my boys? They took it all in their stride. In fact my youngest was more enamoured with the light up spinning windmill toy we bought him during the intermission rather than the trapeze artists who deliberately (in my opinion) missed a few catches in the hope that the resultant “ooohs” and “aaahs” would encourage him to break away from the hypnotic lure of his toy.

When he’s old enough to start benchmarking the tensile strength of the performers’ thighs by visual inspection alone, then they might stand a better chance of holding his attention.

*Though he did say afterwards that he thought [and I quote] "Billy Smarties' circus was the best circus in the world..." so something of the occasion must have made it through the windmill filter.

My father did not approve of circuses so I never went to one as a child ...not even in much later life to the one that visited our village in France where a neighbour told me...breathless with the wonder of it all...that it featured chickens which could count!

My husband was taken to the circus as a child where he distinguished himself by remarking as the tight rope walker climbed up to take her station that he could see that lady's knickers...

A circus isn't a circus without clowns or dwarves or freaks. I would have press-ganged you into being the "bearded man" attraction. Children need someone they can mock and throw tomatoes at.

Gorilla Bananas: I think you're confusing circus performers with parents.

I am commenting on the previous post.
I feel your total pleasure

"No birthday parties" That's where my thought process screeched to a halt!
My one threat to mean kids in school was "You're not coming to my party now"
I agree that the slips made by trapeze artists are mostly deliberate showmanship moves.

English Rider: exactly. And thus I had no bargaining power with the mean kids at school and was always bottom of the heap.

Ah, the roar of the grease paint, the smell of the crowd. Fond memories: Many a circus camped out on Brighton's many parks during those halcyon days of the early years of Bess's reign.

Now, watching the Parliamentary channel is a good substitute. Plenty of clowns and high flying tricksters on display.

I wanted to like circuses but was freaked out by clowns and my parents disapproved of the cruelty to animals aspect. Think my mother managed to take me to about one circus when I was growing up. I can't say I've been psychologically deprived since.

Marginalia: unless they set fire to their balls and juggle them I'm not interested.

Laura: clowns are damned scary. Stephen King missed a trick with "It"; he should have kept his villain as a clown rather than having it revealed as a giant spider.

But did you see Nelly, that's the question?

Mark: if I'd asked the Circus Mistress if I could see her Nelly I think she would have slapped me...

I have had many varied experiences in big tents.

I once saw a circus ( over on mainland Europe mind, where anything goes ) that had a HIPPO.

But... seriously.. no birthday parties ? Were you raised in a laboratory by boffins or something ?

Keith: it sure was lonely in that test tube...

P.S. Was the hippo part of the trapeze act?

I love the circus...it's the sort of raw fun that is too often forgotten about in the polished performances we see elsewhere....

Nota Bene: I must admit it was refreshing to see acts making mistakes or missing catches and just shrugging it off with an acknowledging smile.