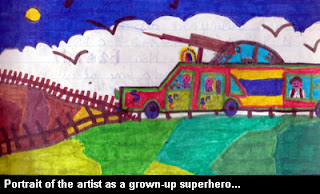 Things are simpler when you are a kid.

I don’t mean life itself. Life can be pretty complicated for even the most settled and content of children. But most problems can be solved with the merest touch of a child’s imagination. Of course, this solution often has little bearing on scientific reality and is beyond all physical and temporal restraints. I’ve seen this at work in my youngest son who, when watching the water aid adverts on TV, tells me quite earnestly that the lttile boy in the advert being poisoned by bad water can instantly be made better if we send him the £2 the advert is asking for. His solution is correct but also not quite correct and it is difficult to explain the nuances to a 6 year old.

To be honest, the fact he wants to help is maybe the best solution of all.

His solution to other world or home problems usually entail chocolate, hugs, money magically appearing from somewhere and things instantly changing because that would just be the right thing to do. Kids have an in-built magic wand that, were it to be real, would both make the world better and worse at the same time.

What got me thinking along these line was a memory I have of when I was a child. It will be of no surprise to you that I wrote stories as a child. Stories where I was the hero leader of a crime fighting gang of movie stars. My posse consisted of the cast of Star Wars (who all remained in character), Charlie’s Angels (all of them – including the replacements when Farrah Fawcett and Kate Jackson bailed out), the good guys from the Logan’s Run TV series (which I only ever saw once) and, for some unearthly reason, Abba. You can imagine the tension  that existed within my gang toward the end of Abba’s pop career.

Anyway, one of the main problems I had was: how the hell could we all get ourselves around town en masse to fight crime? Because my gang consisted of a good 25+ members. Catching the bus or hiring a coach was going to seriously cramp our style. And your ordinary four-door family saloon car wasn’t going to be nearly big enough (people carriers hadn’t been invented in the seventies).

My kid brain came up with the perfect solution.

A car that was made up of an ordinary car at the front but towing a long train of caravans. The car would be welded to the caravans – and the caravans to each other – by sheet metal, creating a metallic sausage of a car the length of the Chiltern Turbo. The spaces between the vehicle were completely enclosed and thus could be utilized by gang members to sit and operate (via hi-tech computers) fantastic weaponry – laser turrets and cannons – that were attached to the vehicle’s exterior.

The pièce de résistance was that the outside would be spray painted in garish colours with the word “supercar” emblazoned down the side. Just in case passers-by hadn’t cottoned on to the fact that this was a less than ordinary vehicle.

I lived with that idea for many years (until my teens) and was quite determined that, when I was a grown-up, I would build this supercar and drive it around Leamington Spa. How could I not? A spot of welding one afternoon and it would be done. Simple(s).

The fact that I’d never get it to take a corner or the impossibility of an ordinary car pulling that much weight around without stalling (let alone ever reaching crime fighting speeds) never ever occurred to me.

And to this day I still know nothing at all about cars.

But dreams that are never going to work…

Well, I know all about them.

Abba, eh? Did the punishment they meted out to baddies have any resemblance to smacked bottoms?

Gorilla Bananas: they had to listen to a live rendition of Fernando. The smacked bottom was reserved for me. But only if I'd been very bad indeed.

Mere technicalities getting in the way of a good idea again...just wait long enough and a new technology will solve the problem and you can patrol the mean streets of Leamington in your supercar...

m too distracted by the man in the back of your supercar with the very sensible vest. What inspired superwear.

The fly in the web: you're right. It's simply a matter if waiting for technology to catch up with me. By the way, when talking about this with my wife last night it reminded me that actually I did solve the problem of my car not being able to go around corners. It could fly.

Being Me: that man is Han Solo no less. He should be instantly recognizable in his off white shirt and black waistcoat.

Propose it to Top Gear. If anyone can make it a reality they could.

Amanda: see my comment to Fly In The Web above...

Keith: and have my leather seats besmirched by Jeremy Clarkson? No chance!

Was this really your painting? Where did you find it? You were very good at colouring in.
I love your boy's approach to solving the world's problems. We need more like him.

Trish: from between the ages of 7 and 11 I wrote a story which spread its way through about 15 Mr Men exercise books - all illustrated in varieties of crayon and felt tip pen - and being a sad sack I kept them all as I was growing up and they are now a curious window into the many vagaries of my childhood mind.

mmm....your supercar sounds like the buses that seem intent on running me over...

Nota Bene: have you been reading early drafts of my stories?