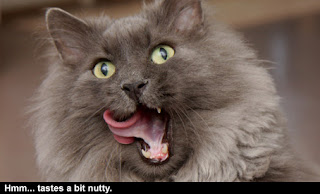 Now that our cats are approaching 2 years of age and are settled enough to humour us in our attempts to govern their behaviour I feel that I am at last getting to know them on an intimate level. And this knowledge is furnishing me with some incredible facts about what it is like to experience existence as a cat.

I’m not talking about their habit of gagging up fur balls at the bottom of the bed sheets or the way they insist on walking in exactly the same spatial corridor as me. I’m not even talking about the way they will sometimes stop what they’re doing and stare just beyond my shoulders as if to imply there is some kind of spectre unseen by human eyes just behind me just to freak me out.

This kind of cat behaviour is well documented and nothing new.

Instead I am at last beginning to formulate a league table of cat kills based entirely upon the pleasure response of the cat’s palate. In other words, I am beginning to suss out what a cat considers good to eat and what it considers bad. I am developing cat taste. Albeit solely hypothetically at this stage.

The league table is currently thus (with purry-yummy stuff at the top and ca-ca spitting horrible stuff at the bottom):


Of course, were I to include all food stuffs in the list then pole position would be occupied by human food followed swiftly in second place by shop bought cat food. But for the purposes of this research I am confining myself to animals made unalive by the intervention of my cats obeying their natural instincts to assassinate anything that moves in a prey-sexy way… and by how much of the carcass they actually eat.

I need to point out here that cats do not kill to eat. Not anymore. My cats are well fed and their kill ratio has nothing at all to do with the gap between meal times. They are just as likely to down a gazelle after a full bowl of Iams as they are hours after the bowl has become empty.

Out of all cat kills, mice evidently taste the best. Mice get eaten nearly completely. Sometimes they will leave the head, or the tail and hindquarters, or sometimes just the feet. But a good portion of the mouse will be internalized by the cat. Mice are therefore 'cat yummy'.

Birds – when allowed to get away with killing one outright (because usually I stage a lightning rescue) follow the same pattern as mice above - it's just that their frequency on the menu is lessened by my intervention. I have often found a skull, claws and wings but nothing much else when waking in the morning and stumbling onto the latest bit of kitty carnage in the hallway.

Butterflies make them pull horrible faces. They clearly don’t taste too nice but must contain some sort of addictive drug because despite the gurning and tongue wiping the cats always go back for more.

Moths, however, are an eat once and then never again kind of buffet. Now the moths are just killed – pawed to exhaustion I suspect – and then left like furry crisps on the carpet ready to self adhese to the undersides of my feet.

The dragonfly was interesting. There’s only been one confirmed kill in my house so far. All the parts were there but the head was separate from the body. I deduced from this that it tasted foul but put up a fight. In fact it didn’t stop fighting until the cats disabled the central control unit, i.e. the head.

Bees and wasps they attack, sometimes chew but never ever swallow. Never. They probably feel like prickly vibrators with a burning acidic centre. My cats would probably rather eat broccoli.

I’m hoping to experiment with frogs, toads and lizards next but they seem to be in short supply around my area. I’d like to try them on horse too but it might mean taking the cats to Tesco and I don’t think they’d be up for that.

Anyhoo, I just need to pass my findings onto somebody. I’m sure there’s money to be made out of this. I mean, why have Whiskas never produced mouse flavoured cat food? It’s always puzzled me, that has. We offer them lamb and beef flavoured food but, really, the day I see my cats downing an Aberdeen Angus is the day I buy a dog.

To protect me from the cats.

Clearly you need to present your Mouse Flavoured Cat food to Dragon's Den, surely there is enough of the little beasts roaming around that no-one would kick up too much of a fuss?

Ha Ha, very amusing and analytical.
We've had killer cats before. One small and angelic looking tabby scarfed down a gopher a day, until there were no more eruptions in our lawn and she never left any gruesome body parts lying around. Her mother once "caught" a humming bird. She must have been yawning and had it fly into her mouth. We were able to save it.
Our current feline visits the table for a small butter tithe and then leaves us in peace. The short-tailed lizards that abound around our garden, and sometimes in our living room, are evidence that she has some prey-drive, but doesn't go all the way.

I've seen a cat eat a wasp. It made sure the wasp was thoroughly bitten and chewed before swallowing it. Here's a cat that isn't afraid to take on a dog. I think your pussies are pussies.

Very Bored in Catalunya: you might have a point. A couple of blokes went on with their dogs food and made a good job of it (as opposed to a dog's dinner).

English Rider: a humming bird? Wow. Must have been a quick on the paw.

Gorilla Bananas: I wouldn't say that too loudly round here in front of my girls... they'd quite fancy ape on the menu.

If you could fix it so that the tin or pouch of mouse flavoured cat food could hop or squeak it might be a selling point....or not, on second thought imagining it unloaded from your basket at the till and going into its act...

Tee hee, I was just thinking last night when one of the cats joined me in the loo, how nice it is to be mouse-free in an old house out in the country in the winter... NZ moths are a cat delicacy - they're big and velvety (their grubs are even bigger) and the cats go out after shop-bought dinner to clear the window panes. I can watch them in their noisy hunt wolfing the moths off the glass.

Steve made me laugh

The fly in the web: it would take forever to get the barcode machine to register it if it was moving. Lord knows they have enough trouble with stationary objects.


Blogger Lady Mondegreen's Secret Garden: ooh that's fair turned my stomach! I have a phobia of moths and the thought of giant ones being masticated in a cats jaws gives me the wobbles.

Butterflies are like heroin to your cat. Check under its claws for needle holes. And make sure there aren't any syringes concealed in the litter tray.

Thank you Mr Attenborough. When I was young I remember our cat had a penchant for bats...they were rarely killed, just brought in and then released to fly around whilst we tore after them.

Can I suggest a bell round their neck to reduce the kill rate?

Fredulous Yo: I suspect my cats favour bongs rather than needles.

Nota Bene: and how the hell will the butterflies be able to fly away with ruddy great bells tied around their necks?!?

What is with the leaving of the entrails? My cat seems to take delight in the entire mouse, save for the anatomically intact tubing system of some sort and the little kidneys. Every. Single. Time. No other trace but the gizzards.

I'm with you on the mouse flavoured cat food. Why do we give them beef and chicken and lamb and the rest? Fish I can understand more, because if desperate I'm sure Fluffy would be able to down a goldfish if left to his/her own devices. Wouldn't mouse-flavoured tinned food solve two problems?

Being Me: yup... I've lost count of the times I've had to scoop up mouse guts from the hall carpet. Plainly they are an acquired taste. And yet when I find the head portion of a mouse the guts are missing... Maybe they have been left as an offering elsewhere? As for the cat food industry, I think rat flavoured Whiskas would make the most business sense. Followed by postman flavoured Winalot.

Being in a non-pet family, since our fish died, this is all very educational yet it's fair put me off my breakfast.

Trish: my cats heartily recommend mouse on toast. Though the toast is an optional extra.

Our cat Mr Cheeky likes peas and corn, but will more or less have a go at anything we eat (I think he thinks he's human). He runs like the wind but luckily has never caught anything though he like to chase the local pigeons given the chance.

Laura: ours have a definite liking for ice cream and baked beans (though not together). And though they love chicken they definitely do not like it with gravy.