In The Firing Line 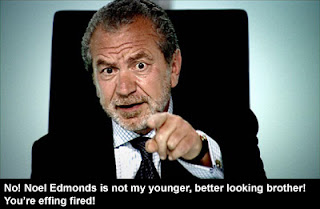 As a rule I don’t do reality TV shows.

As a rule I don’t – if I have any choice about it – do reality though being a hyper-cautious moral wuss my flights of escapism are normally fuelled by books and cinema rather than Charlie or H. My highs might only be literary or cinematic but at least they don’t involve kidney failure or brain damage. That said I have got the Withnail & I boxed set on order and there’s always the possibility of playing the traditional 'Withnail & I drinking game' whilst watching it.

The only reality show I do do is The Apprentice. And paradoxically it probably appeals so much because it is so not real.

The premise is real. The tasks are real(ish). The prize is real (though I imagine it to be something of a poisoned chalice).

The applicants are not. They are without fail the biggest bunch of fakers and self-deluded charlatans ever to dissemble across the face of the earth. And they get more fake each year.

Overblown. Pompous. Constantly self-centredly orgasming over their own self-directed, egocentric hyperbole. Totally blind to the way they willingly sacrifice what little shred of dignity they may possess on the televised altar of their own mistaken self-belief that they are “the one”. I utterly loathe them.

But I utterly love loathing them.

And that’s why I watch.

In a real sense The Apprentice is educational. This is how you do not do business. This is how you do not succeed. The dinosaurs and the outmoded concepts that still abound in this grubby little mercantile world are both amazing and appalling. In the first week the leader of the girl’s team urged her female associates to wear heels and a short skirt as it would help them all sell more product. A woman. A woman said this to other women. And could not understand why they objected. I would have loved her to suggest a shorter skirt to Karen Brady. Actually, sod that, I would have loved her to suggest it to Nick Hewer.

Nick is great. His expression couldn't look more sour if he was sucking a Haribo’s Tangfastic that had been soaked in vinegar from Craig Revel Horwood’s left armpit.

Ultimately though the true draw of the show is Sir Alan Sugar. I won’t pretend to like him. But compared to the applicants he’s the lesser of two evils. My enemy’s enemy is my friend, etc. And Sir Alan is certainly no friend to the contestants.

And it’s good for them too. It humanises them. It strips away their self-erected façade of impervious eternally-ensured victory. Seeing them tramp away dejectedly with their Gucci luggage trolleys we finally get to see the disappointed (and disappointing) little children at heart that, without fail, they all secretly are.

But Sir Alan doesn’t go far enough. I want to see them tortured mercilessly with a constant weight of stress... I want to see them weeping snottily beneath a tonne-heavy sword of Damoclesiastic anxiety suspended by the merest spider’s web of Sir Alan's diminutive mercy... Psychologically waterboarded with the spectre of Sir Alan suddenly appearing at any given moment to kick them off the show with his career-ending fingerpoint of shame. When the telephone rings at the delegate's house at the start of the show to tell them where the next task is to take place I want Sir Alan to suddenly come onto the line and randomly fire whatever pole-greaser has got to the phone first to answer it. When they’re in the middle of Camden Town selling moody spuds from an Amstrad owned market stall I want Sir Alan to appear in the queue in a cloth cap and a Frank Spencer overcoat to hurl their Maris Piper’s back into their faces and tell them they’ve had their chips and the taxi is waiting in the gutter to take them back home to Crapchester. And most delicious of all, I want the boardroom showdown survivors to stagger back to the house at the end of the show, full of anecdotal PTSD and the lone survivor’s raconteur spirit only to have Sir Alan leap out of the wardrobe before they can get their hands on a conciliatory glass of Prosecco and say, ”Ha! Fooled you, worm! You have no right to your smarmy sense of relief! Get out – you’re fired! Fired just because I can do it and the all-sucking vacuum at the heart of my demonic and blackened soul is bigger and far mightier than yours!”

Boom. The ghost in the machine morphs into Frankenstein’s monster. Or a smaller, hairier, coconut headed Godzilla.

Now that, my friends, would be a show.

Because as we all know, that is how real life works.

It tests whether you’ve got balls. And then it kicks you in them.

Welcome to my world.

Now get out. You’re fired.

LORD Sugah, to you, you incompetent bunch of useless numpties.

(and yes, you hit the nail on the head: I also watch it because I love to loathe them)

I reckon the whole thing is as fake as televised wrestling. The obnoxious brats are pantomime villains whose role is to be hated by the crowd. And you are the fat, middle-aged lady screaming abuse at them...the fat, bearded, middle-aged lady.

LCM: it's cathartic. Alan Sugar is probably preventing me from killing someone in a explosive rage.

Gorilla Bananas: flirt all you like but I'm still not going on a date with you.

Big fans of the show here too. It's mesmerising trying to work out if they really are as crass as they appear on TV. I was livid, watching the female team leader on that first task and, like you, ecstatic at the unexpected firing on the second.

Now if you could run your office on these lines....

Trish: I think they really are that crass. I think the screening process is not about finding a good business plan but finding the most controversial oaf they can put on television.

The fly in the web: funnily enough I started off as an East End barrow boy...

Never watched it. Never will. He lives close. Miserable git.

Nota Bene: truly then, he knows where you live. Just saying.

Ah but the current contestants are beyond parody. And SO deluded that even when they are fired, they make excuses for themselves and fail to see they were even at the slightest fault! Can't stand Alan Sugar. The only reason I am watching it is because my partner and I have just started a business and can only watch something guilt-free if it is vaguely business-related! ; - )

Have you seen Donald Trump's Celebrity Apprentice? It's horrendous. And so watchable. Former celebrities or wannabes, performing ridiculous tasks for their 'charities', stabbing each other in the back, throwing tantrums and kissing the Donald's ass.
It's awesome.

Laura: oh Laura, all TV should be guilt-free or if not the guilt should add to the enjoyment.

Clippy Mat: don't know too much about Mr Trump accept for him not being too popular in Scotland. I suspect he might be too American in his business ethos for my British tastes.

"His expression couldn't look more sour if he was sucking a Haribo’s Tangfastic that had been soaked in vinegar from Craig Revel Horwood’s left armpit. "

Delicious. I will be feasting on that (the imagery, I mean...) for days.

Being Me: the strangest things inspire me to acts of sublime poetry...

From their ranks will spring the next Lord Lever, Anita Roddick, Nicola Horlick, Micheal Gove. I could go on.

And we have in Lord Sugar the quintessential successful 1980's British businessman. Made his money in tack and property. It makes you proud to just watch the programme.

I won't be surprised to learn that one, if not all, of those wonderful "apprentices" are chosen as Tory candidates for a few safe seats.

That's keep them from screwing up what's left of our economy.....or would it? Think on.

Barry: I really can't tell if you wrote that with a straight face or not.

Gorilla Bananas has eloquently expressed my views on this subject. Nothing is real on TV.

Fredulous Yo: I know. And I have severe doubts about the news.