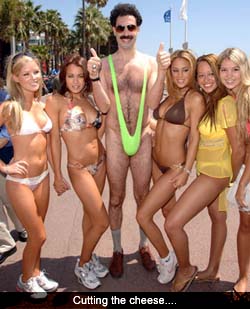 Karen and I made the most of a rare day off work together this week by visiting the local cinema to see the new Sacha Baron Cohen movie, Borat: Cultural Learnings of America for Make Benefit Glorious Nation of Kazakhstan.

It was an interesting experience (the film that is, not going to the cinema with Karen... though of course that IS always interesting... in a totally good way I mean, oh God, moving swiftly onwards...) as the film veered adeptly from uncomfortable scatological slapstick to discomfortingly subtle satire. Despite the shallowness of the Borat persona he was nevertheless an effective vehicle for the film’s many weighty and often poignant themes.

My favourite scene was when Borat was invited to share a meal and experience the niceties of Southern etiquette by attending a small dinner party organized by some of Atlanta’s social elite in the presence of the local preacher. After pointedly excusing himself to visit the toilet facilities Borat, feigning total ignorance of western bathroom protocol, reappeared some minutes later armed with his freshly produced stool daintily contained inside a plastic bag and asked the hostess where he should put it.

Weirdly the reaction of the inanely grinning hostess to this bottom-based faux pas was one of serenity and calmness - one might even say one of motherly indulgence - as she led Borat back upstairs and patiently explained how we in the West go about disposing of our bum-fruit and the various intricacies of the post-poo undercarriage clean-up operation.

Yet as soon as Borat invited a black hooker into the house to be his dinner companion all hell broke loose. The preacher - poker faced to within an inch of being a statue for much of the evening anyway - immediately stormed out leaving his aghast wife behind him and the no longer grinning hostess ordered Borat and his date to leave the premises without further ado and informed him that the police authorities were being called.

It’s important to note that the hooker wasn’t naked or swearing. She wasn’t making any lewd suggestions. There was utterly no soliciting at all and she was better mannered than Borat.

It seems it’s fine to wave a hardening turd around when attending a dinner party in the deep South but if you bring a woman into the house whose only crime is to dress like a streetwalker - and a black one at that - then you can expect to be chased out of town, arrested and perhaps even lynched - with the local clergy brandishing the biggest pitchforks.

It seems respectability and respect for others (regardless of social class) are mutually exclusive concepts in American polite society...

...and it sure as hell ain't my bag...
Posted by Steve at Friday, November 17, 2006
Email ThisBlogThis!Share to TwitterShare to FacebookShare to Pinterest
Labels: America, Borat, SachaBaronCohen, USA