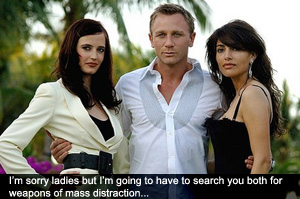 Karen and I saw the new Bond movie yesterday and were absolutely blown away by it. Daniel Craig is the best bond in years and in my opinion even gives Sean Connery a run for his money. Anybody who saw Craig’s performance in Layer Cake wouldn’t have had any doubts as to his ability to make the Bond role totally his own… frankly I’ve been amazed at the dissenting and doubting voices which, sensibly, have been very much in the minority.

Craig’s Bond is blond, brutal and cold and for the first time since Connery an uncomfortably dangerous animal. Unusually for the modern Bond we see him kill with his own hands, up close and personal, strangling one enemy to death and drowning another in a sink basin. There are no deaths by ridiculous gadgetry in this film. When Bond fights his style is economic and purely functional – and far more believable than the idiotically suave Moore or the choreographed automaton of Brosnan. There’s a coldness about Craig which suits the role perfectly – the coldness of emotional armour not of disinterest and this distinction is important. The latter would displace him too much from the audience’s emotional radar. As it is we connect with Bond and root for him but are pushed away from him in the same way that he keeps the other characters in the film at arm’s length. And of course we react in the same way. The more we are kept at bay by Bond’s emotional armour the more compelled we are to stay close to him and urge him on. Craig’s Bond has something that’s been sadly lacking in most Bond’s since Connery: charisma and true magnetism.

The action sequences are impressive and gritty without resorting to the usual Bond-esque extravaganza of trashing absolutely everything in camera shot and the humour is richly dark and adds to the blackness rather than undercuts it – the scene where Bond is tortured by villain Le Chiffre is a case in point. You will shift uncomfortably in your seat as you watch it.

There’s plenty of eye-candy for both sexes – Craig’s blond good looks complimented by the brunette fulsomeness of both Caterina Murino as Solange and Eva Green as Vesper Lynd. Even Dame Judi Dench as M manages to smoulder – not bad for a woman old enough to be drawing a pension!

Although the plot sometimes lacks truly unexpected twists the direction is good enough to make every second of the film satisfying nonetheless. Even though we know that ultimately Vesper Lynd is going to die her death scene is still shockingly disturbing and horrific – we watch her drown with an intensity that is somehow very intimate and affecting. We know that Bond’s revenge is going to be suitably unforgiving and magnificent and this sets us up rather nicely for the next instalment…

And I for one hope that it won’t be too long before it reaches our cinema screens.

Calm down, Mr Clarkson, it's only a commercial!