A Cardigan Too Far 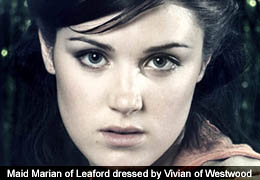 Given that I watch it religiously every week I must find some virtue in the BBC’s new rendition of the Robin Hood legend… even though as regular readers of this blog will know, I’ve been giving it some major stick over the past weeks.

There was a huge sewer system that enabled Robin and Much to escape Nottingham Castle. I mean, come on! They did NOT have sewers in 11th Century England. They had midden heaps, bogs and in the worst case scenario the castle moat. Modern town planning complete with systems of waste removal did not come into being until nigh on 700 years later (correct me if I’m wrong).

Worst of all though (and this is a shame because I think Lucy Griffiths' Marian is the best thing in the show) was Marian’s costume. God knows the costume department are offloading more than a fair share of the clothing inaccuracies onto Lucy’s (broad but shapely) shoulders but this week they just went a step too far.

Marian was gamely sporting a rather fetching looking yellow cardigan that not only was plainly bought "off the shelf", it was also patently, blatantly machine knitted.

Now I know Marian represents the privileged Old Saxon aristocracy in this time period but even so I didn’t realise the old English nobility had full access to Jaeger and Monsoon…
Posted by Steve at Sunday, November 12, 2006
Email ThisBlogThis!Share to TwitterShare to FacebookShare to Pinterest
Labels: BBC, LucyGriffiths, MaidMarian, RobinHood

Has anyone noticed how large-chinned Marian is? I've begun to look out for big hands and an adam's apple...