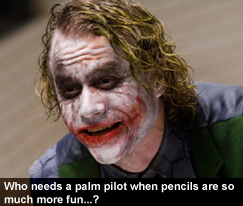 A week ago, as part of the spectacular birthday celebration that heralded my 39th birthday (apologies if the fireworks kept you awake) Karen took me to see the new Batman movie, The Dark Knight. I’d quite enjoyed Batman Begins – as superhero movies go it was nice ‘n’ dark, gritty and packed a hard hitting punch or two. But for me the story was too fragmented, too intent on ticking as many bat-boxes as possible within the classic Batman framework... it tried to do too much and felt frustrated and frustrating. So despite the hype it was with some trepidation that I settled into my seat to watch The Dark Knight.

I needn’t have worried. It totally blew me away.

The sets, the backdrops, the stunts, the action... all on target. The story – despite the length of the film – felt tight and compact (like a well defined six-pack). And the humour... ah the humour was so dark it felt beyond black. I actually felt a twinge of regret when it was all over.

Michael Caine was a joy to watch and I’d at last fully accepted the bat-voice without wondering at what point in the movie Bruce Wayne had smoked a hundred Columbian cigars... Gary Oldman too was effortlessly believable as Gordon. The man is such a chameleon – he manages to change his physicality in every film I’ve ever seen him. How else can he go from the emaciated Goth cool of Sirius Black to the fustiness of Gordon and yet still look like himself?

But all this is just the nuts and bolts of the movie, the framework – the skeleton – albeit a very impressive one. The flesh, the heart, however is The Joker. Was Heath Ledger as good as the hype? For me: yes. Definitely. All the clichés are at least meaningful and fresh – a commanding performance, hypnotic, mesmerizing. In any scene where he didn’t appear I found myself pining for him to pop up in front of the camera.

I liked the fact his performance doffed its cap to the classic Joker and yet also managed to contemporize it so fully. The lies, the tricks, the surety that he will always, always play you false, the certainty that even the truth from his lips will inevitably be a lie. My favourite part of the film was The Joker’s self-deprecating speech to Harvey Dent: he dismisses himself as a mad dog, too chaotic to plan, to organize, he merely acts on his every whim, it’s not personal... it is the police, Batman, the authorities who plan and plot, who connive and conspire.

It is of course another delicious lie but one that hints at an interesting subtext of the movie. The Joker is the most organized agent in the story. To tell a good joke, to perform an effective trick takes eons of planning, post production, preparation... It is The Joker who connives and conspires more effectively than anyone. The Joker allows himself to be captured by the police or at least plans ahead for it – how else explain his henchman with the bomb-phone sewn into his guts?

The mad dog, the man who acts on his whims is, of course, Harvey Dent. Stripped of his suit and tie, the façade of law and order, he merely becomes another one of the Joker’s slathering canines, maddened, hungry, blindly animalistic but leashed and very carefully directed. Controlled completely by The Joker.

But isn’t Batman himself also a creature of instinct and whim? Isn’t Batman too something of a mad dog? He reacts emotionally, personally to all of The Joker’s plots and machinations. He considers giving up his Bat alter ego on an emotional whim and returns to it without a second’s regret. His explosions of violence match those of The Joker and he is just as apt to change the rules of engagement to suit his current requirements... The Joker was correct when he told Batman that he completed him (though it was a corny line). The correlation between these two characters is intriguing and gives the film its distinctive resonance.

Where they go from here in the regretful absence of Heath Ledger is a mystery but I’m awaiting the next film with a pleasurable amount of excitement. Just what kind of morning will follow this dark night? I can’t wait to find out.
Posted by Steve at Thursday, August 21, 2008
Email ThisBlogThis!Share to TwitterShare to FacebookShare to Pinterest
Labels: Batman, birthday, cinema, film, Karen, movies, violence

You've just achieved the improbable and made me want to see it.

i am very much looking forward to seeing this movie...i love batman movies...i have no idea why...superman puts me to sleep every single time but i watch batman on the edge of my seat...thanks for the preview...i want to see it even more now!

Glad to be of service, Brother T - it's definitely worth a look-see.

I know what you mean Daisy, there's something improbable about Superman - and Spiderman too (sorry Rol) but Batman... with his reliance on technology and science... it's just within the bounds of possibility...

EXACTLY steve! plus batman is damn sexy in all black...sorry but he is :)

He doesn't really tickle my fancy Daisy but I can appreciate the all in black thing...! Hopefully Cat Woman will make an appearance in the next Batman movie and then we'll both be happy!

Glad you enjoyed it. I loved it too. Sent shivers down my knees.

There's never a morning in Gotham, the night just gets darker and darker...

I know what you mean, Nora, though I'm not sure I'd want the world to know that I experienced a knee-trembler with Batman...!

The darker the better as far as I'm concerned, Rol. Mornings are vastly over-rated anyway...!

It may be my old eyes but in some scenes the dark knight was a bit too dark...literally...and the 'smoked a million cigars' voice was irritating but Joker....ohhhhh Joker....so cool so very cool

Good review :-)
I just watched it on Sunday, so can agree very well. It was engrossing :-)

It was extremely dark Deirdre... I do wonder how that will translate to the small screen when it's released on DVD.

Glad you enjoyed it too, Eve. I'd actually love to go for a second viewing which is something I rarely say about a cinema viewing.

I'm with Brother T on this one, up til now I haven't really had the inclination to see this film. I suspect its part of my natural "up yours" reaction to being told "You simply MUST see this movie" by the advertisers!

Haven't actually seen "Batman Begins" yet, despite owning the DVD, so I'm looking forward to seeing both films at some point.

I've never really been a fan of the Tim Burton ones. I much prefer Julie Newmar as Catwoman, in the early seasons of the 60s' TV series, to Michelle Pfeiffer!

And, I don't think Joel Schumacher has ever made a decent film in his life. Again, I prefer Yvonne Craig as Batgirl, though by the time she joined the series Eartha Kitt had been miscast as Catwoman!!

I must admit, Amanda, I tend to have the same sort of reaction but sometimes the hype is right!

Hi TimeWarden, my memories of the Tim Burton films are pretty sketchy now. I seem to remember thinking they were ok though I was unsure whether Michael Keaton made a good Batman. I actually preferred Val Kilmer's outing. However, this new breed of Batman films is far superior - as much as I'm a great fan of Burton's other movie outings (Planet Of The Apes aside).

I think the new Batman series is doing the same thing as James Bond. Get rid of the side salad and get back to the meat and two veg. Bot series of films are better for getting back to basics.

PPS - I look forward to the forthcoming remake of Logan's Run.

Any idea who they're getting in to play Jessica, Gordon?

I certainly rate Sleepy Hollow highly but was very impressed with Sweeney Todd too.

As for main course movies... side salads are always best left out so the viewer can concentrate on the steak...

Actually, it might just be a thrill for us to see a movie that isn't rated "G"!!!

Hi Steve... sorry, I DO have your email (when I emailed you for pics when Tom was born, and you sent the pics) but it's somewhere in my inbox, and yahoo doesn't have a way of retrieving it except by clicking backwards through months of mails. So could you please, please, send it again...? :-) thank you very much :-)

Oh jeez, we must be "quainter" than I thought! It means "G' for general viewing. PG is Parental Guidance. At the moment, we feel "sneaky" hiring PG movies for us all towatch at home. Think Pirates of the Caribbean...thats PG here.

Will do it now, Eve.

Amanda: doh! I feel so stupid. We have PG here but I don't think we have G (do we?) - instead we have U for Universal viewing.

It's certainly better than Batman & Robin...!

great review Steve.
great movie lines to quote in this one too...
but did you guys find yourselves watching Heath the whole way through the movie? X

Definitely Kate, even without the real life tragedy overshadowing his performance he was simply mesmeric for the duration of the film.

yeah, i agree.
mesmeric.
we will miss him so much X