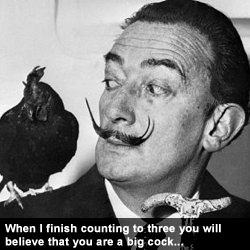 Robin Hood had it. The Great Train Robbers had it. Bonnie and Clyde had it in spades. Prometheus. The Artful Dodger… the list could go on.

Great thieves, ladies and gentlemen. Robbers with style. Bandits with a bit of class.

You can’t help admiring them. The guts. The arrogance. The sheer chutzpah of their endeavours.

They have now been joined by an as yet unnamed fellow from India who managed to hypnotize (yes, you read that right – HYPNOTIZE) a Mumbai jewellery store worker out of £160,000 dollars worth of loot.

“Indian police are hunting a conman who hypnotised a Mumbai jewellery store worker before stealing 160,000 dollars worth of diamond necklaces and bracelets.

Katrina Sunil Purswami, who works at the Seres store in the upmarket Bandra West suburb, was told by the man on Saturday that he wanted to give the gems as a present and persuaded her to bring them to a nearby hotel.

"When the employee went to the hotel, the accused acted like he was the owner," senior police inspector Prakash George was quoted as saying by the Daily News and Analysis newspaper on Monday.

"As Purswami was showing him the sets, he asked her to write the details of the sets for him. He then hypnotised her and decamped with the ornaments. Purswami was left confused and could not understand what was going on."

The officer said the jeweller's store was newly opened and the owner allowed the employee to visit the hotel with the diamonds because he thought he was in line for a large sale.

Police are studying CCTV from the hotel to try to identify the conman but cameras at the shop were not working, George said.”

I think this is marvellous.

I know theft is wrong but there is just something so brilliant about this story. Nobody got hurt. I’m sure the jeweller had insurance. Property and person were not injured. I’m not advocating what has happened but, by God, I’d like to shake the thief by the hand (whilst avoiding his mesmeric gaze lest my cheap wristwatch find itself inveigled into his back pocket while I perform chicken impressions to the bemusement of all on-lookers).

I just wonder how he did it.

Did he swing a pocket watch in front of the hapless shop assistant? “I’m sorry miss, but I think my watch is skipping a second or two… could you keep a close eye on it for a minute and see what you think?”

Did he stare intensely into her eyes, soul locked to soul, and speak in a voice lower than Barry White’s gonads and impel her helplessly to do as he said?

Or did he fire lightning bolts into her from his fingertips like The Emperor from Star Wars and cackle evilly as her body, stiffened into a sub-zombie state, staggered around the room and dropped a hundred thousand pounds worth of Tom Foolery into his lap… candy from a baby style.

Most important of all: did he have a long thin moustache which he twirled wickedly before tossing his black silk cape over his shoulder and fleeing from the scene of his crime?

There is surely a great novel in this story and if I wasn’t 180,000 words into one already I’d be musing on the plot and the characters and trying to acquire an agent.

I only hope that when the police find him – as they surely will (a trail of people clucking like chickens is hard to miss) – he isn’t found with a Paul Mckenna self help book sticking out of his back pocket (along with my watch).

That would be so disappointing.

[Re: the novel] I think it's more of a case of me being far too verbose. I think I'll need to do some very heavy editing when it's finished!

It did make me smile when I read it.

If he's really good he won't get caught.

Good luck with the novel; what is it?

The novel is a psychological horror - sort of Murakami meets Barker although hopefully not sounding too like either of them but finding its own ground instead. I reckon 200,000 words will see the first draft finished - another three month's work at the rate I'm working at the moment.

i think he put the jedi mind whammy on her. we watched "The Bank Job" last night - you seen it? 1970's Lloyds Bank heist - planned to go up through the concrete floor into the vault - almost as good as the jedi jewellery job X

It's a funny story!

I supposed the thief could have slipped something into the jeweller's drink but I like your melodramatic thin moustached character the best. I can imagine it as a silent film with Charlie Chaplin :)

Damn, everytime I get a good idea someone else hops in first!! I have now resorted to blogging to make people sleepy...verrry sleepy...

Annie: I daresay the thief looked as ordinary as hell but I like the idea of him being a traditional Victorian villain.

It was Barry Whites gonads...(I mean his actual gonads...They were donated to science for studies of their unusual chutzpah powers...)

I think it's hilarious and tragic!

To get away with truly hypnotizing someone...they have to allow it...

Maybe they were really working together...

I did wonder that Sweet Cheeks, but you know, I think that just adds to the fabulousness of the crime. Good luck to the pair of them!

Thanks Surburbia - I think another 3 or 4 months should see the first draft completed.

ha ha he will probably hypnotize the police if he is caught, and he'll make them do darstardly things like walk the streets naked covered in tar and feathers or something similarly daft!

The police will have to put a bag over his head to stop him mesmerising them - either that or they'll need to wear anti-hypnosis glasses and ear mufflers.

Hi: I've tried to add your blog to my blog roll but no can do... the link will not work. Any ideas, you being the techy guy?
Thanks :-)

That's very kind of you Clippy Mat. The blog roll doesn't work because I publish to my own domain rather than to blogger. You can try adding a simple link - unfortunately if I try and put it in this comment it will come up as the link itself rather than the code (if that makes sense). Please see the "Meanwhile..." post above this one for the code and then add it in your blog list. Thanks again!

It was a pleasure. And I'll be back too!

I reckon it was a scam and they were working together! Brilliant tho!

I'm sure the police will be thinking along the same lines. I pity the poor shop assistant if she's genuinely innocent!

good luck with the novel - I had no idea

and I also missed this gem of a post first time round - see, searching for your link is very interesting

I'm just happy that you're finding stuff entertaining enough to distract you on your search!