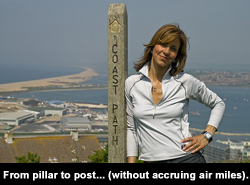 This is probably a minority interest post so I apologize in advance but will carry on regardless.

Not a megastar. Not an A list UK celeb. But kind of always there. Grafting away. And in my opinion delivering some of the Beeb’s higher quality programmes. Lakeland Walks and the more recent Railway Walks spring to mind. If you’re an avid hillwalker – always out and about with your waterproofs and your mountain boots – these programmes are an invaluable source of ideas and inspiration. And if you’re a hillwalker who’s strapped for cash these shows offer the opportunity to enjoy the pastime vicariously from the comfort of your own armchair.

Julia also co-presented the Beeb’s Watchdog, a show that tracks down and grills wrong doers – particularly of the corporate kind – and gives a voice to the little man when he has been wronged.

Alas Julia disappeared from Watchdog a few weeks ago amid reports that a friend of hers in the air industry had been bunging extra air miles onto Julia’s account (either with or without her consent) as a way of doing “an old pal a favour”.

Or so rumour has it.

I don’t know the ins and outs of it and don’t rightly care. Julia immediately withdrew from Watchdog and is staying off the show until she has cleared her name.

Personally I reckon she’s innocent. Anybody who champions Wainwright has got to be a decent honest person in my opinion. Us hillwalkers have got to stick together (unless we’re actually hillwalking in which case a bit of solitude is the unstated prerequisite). She’s also a brunette. A fact sure to win my unswerving loyalty. And she has a great voice. Sort of smoky and chocolaty at the same time. That proves her innocence. No further evidence is needed.

More importantly though she’s a darn sight better looking than her Watchdog co-presenter, Nicky Campbell – a man who has no right to look so damned smug and constantly superior after presenting the God awful Wheel Of Fortune on TV in the previous century.

My point is this: do we expect our TV presenters to be totally squeaky clean all of the time? Absolutely 100% above board and bangs to rights?

Simple logic dictates that we should but – even though I don’t doubt Julia’s innocence in this case – wouldn’t we all have accepted a few extra air miles from a friend if we had one in the commercial flight industry? Wouldn’t we accept a favour from a friend whatever industry they work in? A discount on a pine dining table? Some hardback books at cost? A few pennies off a burger (hold the mayo)?

I mean a few air miles are hardly on the same par as Angus Deayton’s much publicized coke fuelled liaisons with some of London’s finest scarlet women a decade or so ago. Or Richard Bacon’s scarlet-women-less coke fuelled adventures a year or two before that.

And it’s not like Julia is a politician, wielding power enough to change the lives of every man, woman and child in the country. Does her character need to be as pure as a saint, impervious to all attempts of bribery and corruption?

It seems to be a lot of fuss over nothing. Or am I just being biased simply because I like Julia? I admit if it was Campbell accepting a “free gratuity” from the Bell’s Whisky company I’d be calling for his head on a pole. But who wouldn’t want to see that period?

So apologies for the nature of this post once again. This post has no point other than to register my demand with the BBC that Julia Bradbury be reinstated immediately to augment my television viewing pleasure.

And to demand that Nicky Campbell’s skull be surmounted on a brass topped spike and displayed over the gatehouse of Warwick Castle (I can’t afford the train fare to see it at the Tower Of London).

To be honest, part of me thinks that this air miles baloney is just a smokescreen created by Campbell and his other Watchdog cronies anyway and Julia is currently being held hostage in the boot of Campbell’s car, her smoky, chocolaty voice brutally muffled by Campbell’s sweat stained sporran.

Scotland Yard should be informed immediately. Interpol should be alerted. A cell should be swept clean (or unclean) at Guantanamo Bay ready for Campbell’s imminent arrival.

I pay my TV license fee for emergencies of this kind and I expect to be obeyed!
Posted by Steve at Wednesday, April 01, 2009
Email ThisBlogThis!Share to TwitterShare to FacebookShare to Pinterest
Labels: AngusDeayton, BBC, complaints, drugs, honesty, JuliaBradbury, NickyCampbell, RichardBacon, scams, sex, television, WarwickCastle

Ah well, I don't know who she is but she looks kind of sexy.

But I have no real interest in celebrities (other than Keeley of course!). I can't see why they have to behave any better than anyone else, they just have to accept that because they live in the limelight, when they do something inappropriate, everyone who reads about celebrities will know about it. Seems like a fair deal to me. I don't think they should lose their jobs over silly stuff like this. If what they do is illegal they should be treated like everyone else.

I seldom watch UK tv these days and didn't know of the lady in question, but I reckon if most presenters, or indeed anyone in the media, were investigated they would be found wanting somewhere or other. and don't get me started on the good old MPs.

I was thinking of suggesting to the BBC a series called Julia Bradbury's Railway Stalks, in which I follow her while she walks along railway tracks !! :)

Exactly - on all points Gina. Being a celebrity shouldn't bring you extra freedoms but neither should it put you forward for extra censure - not unless you're presenting yourself as an ideal of moral perfection of course but precious few celebs are stupid enough to do that or clever enough to get away with it. And Jules is definitely kind of sexy. But this did not influence my opinion at all. No. Not at all.

FF: none of us are saints at the end of the day and I bet most politicos are right devils when the dirt finally gets dished.

Andrew: LOL. What a wonderful idea. Tell you what you can stalk her along the railways and I'll take her (ahem) in the Lakes. I quite fancy leaping from crag to crag chasing her like Gollum chasing Frodo in LOTR. And please, no jokes about Julia being a ring bearer please. She's not that kind of girl. (Not unless she can be tempted by a bag of coke, that is - Angus assures me it's hot shit.)

I suspect they discovered Julia is actually a man - big hands and an adam's apple are a dead giveaway, mate.

Wait a minute...you're telling me there is a grown man calling himself "Nicky"? Good grief, no wonder the economy is crumbling!

No idea who that brunetter is either but I'll go along with your theory as you haven't put me crook yet. Let me know when the petition to free her needs signing....

Tris: how dare you impugn Julia's gender. She's clearly a wo-man. I'll have you know I can spot them a mile off and have never been wrong yet.

Amanda: I personally blame the state of the entire world's economy on Nicky Campbell. I wonder if his mates used to sing Prince's "Darling Nikki" to him in the eighties...? I do hope so.

There's a wicked sense of humour lurking in that intelligent grin. Personally I'd forgive her treason, regicide and breach of parking regulations. Can't remember much about her programmes though; I just look at the pictures.

"Personally I'd forgive her treason, regicide and breach of parking regulations."

I have started a new website called http:/www.lakelandwalks.co.uk and I would definitely give Julia Bradbury a job on our website which is aimed at helping all walkers of all abilities.

Anyone can upload their own personal walks to this website and you do not have to be Julia Bradbury, although if you do read this blog Julia please get in touch with me as would love to go on a walk together and with anyone else who wishes to accompany lakeland walks up to the top of Blencathra anytime soon.

Lakeland Walks: congratulations on the spiffing new web site - I may well make use of it myself. As for Julia Bradbury - she doesn't, alas, frequent my blog or, if she does, she has never made her presence known. However I live in hope. Should she ever contact me with a hillwalking invite I shall of course accept immediately and suggest we check out what your web site has to offer. Best of luck for the future!

A few air miles doesn't sound bad, does it, but when it equates to more than £20k ...? Also, it wasn't a 'friend' doing her a favour, it was her sister, who owned a travel agency, and just happens to be married to Paul Fox, who is ex-boss of BBC1. Nepotism perhaps, to sit alongside the fraud?

Anonymous: but you make it sound like such a bad thing.