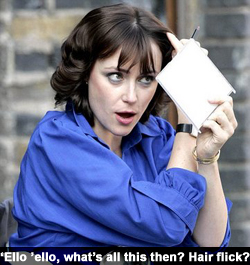 The BBC managed to divide my loyalties last night.

Was it to be Heroes – now already half way through the much improved fourth series? Or was it to be the first episode of the brand new series of Ashes To Ashes?

In the end it was no contest. The twin allure of Keeley Hawes and “Gene Hunt” (possibly the finest fictional cop creation of the last 20 years) managed to knock Hayden Patisserie (or whatever her name is) and Silage into a cocked hat.

The Quattro beats the Petrellis as sure as rock beats scissors.

Apologies for those of you who don’t get this show but your loss enables the rest of us to feel smug. Thank you for your sacrifice.

Yes. My life is complete. The Gene Genie is back not only with a vengeance but also with a cracking soundtrack that featured The Human League, Duran Duran and The Thompson Twins (I used to love The Thompson Twins – it was so nice to hear them again).

Hawes’ “Alex Drake” character has been given something of a makeover – the New Wave makeup has been toned down, the perm has disappeared in favour of a flicky bob and her hot pants are now tighter than Hunt’s shoulder holster. In fact whereas a bullet from Hunt stands only a 99% chance of flooring you the arsenal Keeley is packing in those hot pants is guaranteed to a put a red blooded male on his back without fail 100% of the time and without leaving an unsightly exit wound. A definite plus for those of you who can’t afford dry cleaning bills. She can fire a few rounds in my direction any time.

Last night’s episode tipped us straight into the heart of Soho and endemic police corruption and featured a script that could cut diamonds. In turns both funny and moving it was virtually impossible to keep tabs on all the references that peppered the dialogue. But why bother even trying? Just sit back and enjoy the ride in the knowledge that the cops aren’t going to pull you over for not wearing a seatbelt and won’t bang you up for sporting a mullet. Folks, good times are here again.

It’s time to roll those jacket sleeves up, loosen that leather pencil tie and whack some Dire Straits onto the tape deck.

Welcome back to the Eighties.

Oh dear! I really must make an effort to watch more television. I have NO idea wwhat these programmes are and I would probably love them. Am happily humming the 'Sultans of Swing' as I type

Justme, Ashes To Ashes would be a good introduction to top quality modern drama... er... even though it's set in the 1980's...!

I've recorded it Steve - absolutely can't wait to watch it!! Will try and find time this evening :)

I'm more of a sucker for the big sideburns and huge flares of 70s shows like Minder. I actually had a crush on Dennis Waterman - I think I have always had a penchant for the bit of rough.

Annie, you're in for a treat. Gene doesn't get all the best lines for once... Chris drops a couple of blinders too.

Emma: French courtier with sideburns? Hmm. I think I can pull that off. Philip Glennister as Gene Hunt definitely can. I never got into Minder but do quite like Dennis in New Tricks where he plays a geriatric cop... but oddly doesn't appear to look any different from his Minder days...!

Ah that set my heart racing! I can't wait to catch up with Keeley. Glad they did away with the perm, I was never keen on that.

Tight hotpants. This is all a bit much for so early in the morning!!

I liked the Thompson Twins too.

Thought it might tickle your fancy, Gina! Have to say, Keeley is looking damned fine... it'll be worth the wait when you get home!

You took the words right out of my mouth (though I'm not quite so likely to keep one eye on Keeleys hot pants! Her hair is miles better tho'). I have been waiting for this for ages, and like you, was not disappointed, and the music is the icing on the cake!
All those gems which are too quick to catch? That's easy to remedy, I'm going to watch it again on i player, possibly more than once, is that sad?! :)

(Dare I say......there is something a bit sexy about Gene Hunt!)

I shall definitely be buying the series on DVD, Suburbia, so I can hardly bandy around accusations of "sad"! And you're not the first woman to appreciate the magic of the Gene Genie...

Glad you apreciate the sacrifice;)

Sounds great though I'll have to wait for you to lend me the dvds.

The music does sound great though, it's one of the reasons why I watch Cold Case.

I wish I could watch fun tv like this!

I think your whole post was an outright lie...

Bit if trivia for you, but Alana Hamilton (one of t'twins) is a kiwi lass and they all live back here now.
Anyhoo - I think I would agree with your choice between programmes. We only recently saw the Two Doctor's episode of Dr Who and there doesn't seem to be any sign of the rest of Dr Who progs on the horizon, dammit Janet!
We enjoyed the Ashes to Ashes and Gene Hunt ROCKS.

Missbehaving: Cold Case sounds familiar. I've never seen it but it's possible that it's broadcast here (?) possibly! Will have to look it up. Hopefully Life On Mars / Ashes To Ashes will be exported your way soon!

Sweet Cheeks, I wish I could help you but if I said that I could it would be an outrageous lie. I think quite possibly that my brain has been washed too. Though some staining remains...

Amanda: you've totally confused me! Alana Hamilton? Is she in Heroes? Or do you mean Ali Larter? Mind you, either of them living in the neighbourhood would be good for me! Re: Doctor who. The Easter special was only broadcast here a couple of weeks ago so it'll be with you in a month or two. There's three more specials planned and then it's the end for Tennant and an new series with a new Doctor. Hope I haven't ruined things for you!

Isn't it funny how everything seems to go in circles?

It is. But also strangely right and appropriate.

oops, I meant Alanna Currie actually! I forgot to take my meds...

Oh my goodness, was Alana "shaved head at the sides and curly bit on top" Currie in Ashes to Ashes?? Wish I'd seen her. I haven't seen any of the new series yet, but I LOVED the ad with the Spandau track and the team looking mean and moody down the disco. Keeley Hawes is a lady who just might get me on the turn. Or maybe it's her fab 80s styleeeeeeeee...

By the way, Stevenage, just one other thing....I have made a decision and I'm gonna stick to it (and no it's MY decision - I don't need this pressure on...)

Copy and paste into one's browser if one wants...

OC: sadly Ms Currie was not in Ashes To Ashes - well not in that sense but The Thompson Twin's classic track "Doctor Doctor" was. And as for Keeley threatening to turn you...! OHMYGOD! I am shocked and more than a little appalled. And to quote a classic ska track "hands off she's mine"!

On another matter can I say how lovely and wonderful it is to welcome the Cheesemeister back to the blogging fold? You've been sorely missed. Am so glad you're back my friend. Best news I've had all day (but then I have been at a funeral)...! ;-)

Aha, I should have read your post properly! Appalled that Keeley should turn me? But she's a gorgeous specimen of womanhood isn't she, so surely it's understandable...? (!) But okay, okay, yes you can 'ave 'er, Mr S, I promise not to muscle in....(Gene Hunt just doesn't do it for me though...)

And thank you for the welcome back! I am kind of building up to it, and it may take me a while to collectively pull together my scattered senses, but a return IS forthcoming. Like yourself I just love the creative aspect of blogging, not to mention the exchange of ideas and views, so as everyone suspected, it was only a matter of time...watch this space...

Somehow I didn't think Gene Hunt would be your bag OC! I'm looking forward to your return to hear what you've been up to and also to have some entertaining debates about cheesy television!

but just a bit of technicality for ya, Heroes is still in (or just finished in the US) season (series 3) The season was broken into 2 halves volume 3 Villians and volume 4 Fugitives.

Ray is turning into a bigger dick each week tho, isn't he?

Thanks for stopping by Chanynelightning - I kind of like Ray because he is such a dick! I must admit I'm missing Heroes and hope they'll re-run the series here later in the year - I've seen up the part where Sylar has teamed up with the special ops dude and they've faked his death.