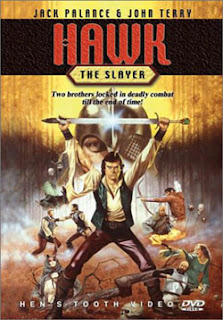 No, I didn't spend Friday battling the evil forces of Voltan (aka The Dark One) alongside an elf and a giant bearing an uncanny resemblance to Bernard Bresslaw (on account of it really being Bernard Bresslaw) but instead spent it at Batsford, a little village just outside Moreton-in-the-Marsh, which features an arboretum and a falconry centre.

I've long had a passing interest in birds (cut the jokes please, I can see them coming a mile off), particularly raptors and after a visit there with the family last July my interest was duly noted by my wonderful wife, Karen. And later, while my back was turned (buying chocolate no doubt from the falconry shop), she secretly enrolled me on an "introduction to falconry" course for my birthday.

That glorious birthday occurred in August and it's taken us this long to finally confirm a date and actually get to grips with the raptors. We endured a couple of aborted attempts in the intervening months when we had to pull out at the eleventh hour due to the kids being ill (How do they know? How is their timing so spot on?) but it was a case of third time lucky.

The weather dawned dry and fair and the kids weren't at all consumptive... so off to school and nursery they went and Karen and I scooted off to Batsford to finally cash in my falconry voucher.

It was marvellous. As you will see from the photos below I got up close and personal with a number of birds - a kestrel, a falcon, a hawk, an owl and an eagle of foreign extraction who's exact geographical name I can't remember because I was so blown away by the whole experience.

There's something very calming about being so close to a bird - especially such large ones. I think on some level you calm yourself so as not to agitate the bird and then benefit yourself from the resultant avian zen-like state. I'm almost considering starting a new religion. The Birdies or something. Or possibly The Great Tits. Leave it with me. I need to mull this one over. Choose the wrong name and I'll be a laughing stock in spiritual circles...

But back to the falconry: after having numerous birds on my glove I ended up flying a beautiful falcon named Ben - oddly the same name as my eldest boy but a darn sight more obedient and easier to please: given a raw chicken foot to eat he was as happy as Larry... 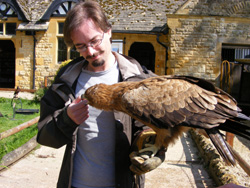 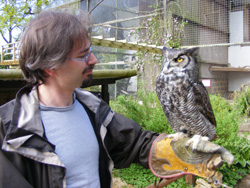 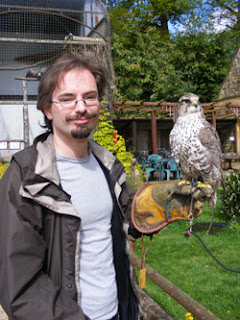 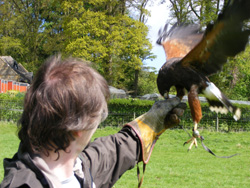 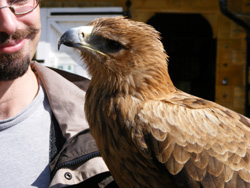 If only all of life was this simple...

Posted by Steve at Sunday, May 03, 2009
Email ThisBlogThis!Share to TwitterShare to FacebookShare to Pinterest
Labels: birdsofprey, birthday, falconry, holidays, Karen

Well I am not that keen on feathery birds myself but I do think you look very handsome, Steve.

I'm glad you had a wonderful birthday treat and a lovely day out with Karen.

Why thank you, Gina. I am blushing pleasurably. As for Keeley, now that's one bird I'd love to have on my arm... though only for platonic friendship and with Karen's permission, of course...!

I've had a fruitbat or two on my hand sucking a finger or two as a result of going on 'bat walks' in Oxford but am happy to remain at least 10 yards from a bird of prey.

Glad you had such a wonderful day though Steve - sounds like it was a tailor-made birthday present!

Glad to say my fingers were left unsucked on Friday although the Eagle had a bit of a peck of two... thankfully there's no real strength in the beak, as my tutor informed me, it's all in the talons. Those pointy things that were gripping my hand rather tightly through the leather glove... I like bats but prefer birds. It's an aesthetic thing.

Oh Wonderful Steve, what an awesome day! I'm so glad you enjoyed it.

Let me tell you my last experience with a bird of prey...

My good friend Ed Pitcher raises Peregrine Falcons in an effort to keep their numbers up. He built a preserve on his property. Several years ago he took me in to see his mama bird and her hatchlings. OH BOY...

That mama bird eyeballed me and decided I was there to steal her babies...she attacked. Thank goodness Ed stepped between us. Needless to say...I was out of there in two seconds. Funny enough, in Ed's full time job, we worked together at the same hospital and on our next shift that night, he gave me a tetanus shot...I've never let him live that down...

Moral - Don't ever look a bird of prey in the eye....they will kick your ass.

A new religion. Will members be called 'Birds of Pray'?

Or, since you seem to be a fair minded bloke; 'The Eagalitarians'; hmmm, even worse.

I find them lovely to look at but would be a little nervous close up, I think.

Touching when your partner organises somthing special for your birthday.

Sweet Cheeks: I certainly wouldn't have wanted to get on the wrong side of any of the birds I handled on Friday - for all they were gorgeous and awe inspiring - I was very aware that their talons are designed for ripping / piercing flesh. I think any animal is overly aggressive when they have young around. I was glad that the birds I handled were not at all in the family way, were all young, free and single and laid back as a consequence. In fact most birds of prey are lazy buggers most of the time and don't actually fly a great deal. Probably why I feel an affinity for them!

AWB: I should have thought of those myself! Up close they are astoundingly beautiful and intriguing. As long as they're on the glove (trained to it) they feel safe and secure and are happy to be handled by just about anyone. They don't like being petted though. It's a bit like your wife spending hours styling her hair only to have you ruffle it all up. They don't think kindly on it apparently so I kept my hands to myself and exhibited some respect. It seemed to work. Though the chicken gobbets I was holding may also have ensured a little obedience...

Isn't it great to have a good day out? Looks like all you needed was a pair of tights and you would have fitted in as Robin Hoods secret messager bird person! Was it a long day out, were you up at sparrows fart to make the trip in a day? I trust you avoided the shops so people didn't try and hawk their wares at you? (Sorry, this puning started at Owen's and I have been on a pun-high ever since)...

We didn't have to be too early to catch the worm, Amanda - it's only an hour's drive away from us (as the crow flies) - practically on our doorstep. Be careful you don't overdo the puns or I might have to take punitive measures...

They really are beautiful birds, how wonderful you got to go out and spend the day with the family in their company.

Hi Janete, good to hear from you. The birds were amazing - nature's most perfect design in my opinion!

What a thoughtful present. Glad you had a good day out. I like to look at the bird, they are maginificent, but I wouldn't be able to hold them. Visually, I have a thing for cranes.
Great pix.

It was a good day out, Missbehaving, and one that was much needed. The great pics are courtesy of my wife who has a wonderful talent with a camera.

Steve, What a splendid day you had !!! I'm envious ! But I can't help but 'owl with laughter at all these bird-brained remarks here. I agree with you, that naughty Sagittarian needs to be punished, she's been having a right lark ! But she's going to r-egret it ! I know, we can sick the pack of hunting dogs on her that they had at that place, you know, all the b-eagles... Oh dear, after punting down this river of comments, I'm feeling just a bit peckish... am off to lunch... something fowl no doubt !

PS I apowlogize for the preceeding outburst, I was feeling rather chirpy all of a sudden... I'll try not to let it happen again. In fact, I was just pulling your leg, well you could almost say I was... wren-ching it. But I know you are not so gullible as to fall for such cheep parlor tricks. I am not all that good at punning actually, it was my mother who was the champion punster in the family. But she is getting on in years now, does that make her a "spunster"? Yes, I'm sure I missed quite a few subtleties in the other comments... am going to have to go brush up on my bird kn-owl-ledge... oh, those pesky owls again... am going to have to get in my car and go over to Germany... Why Germany, you ask??? Well, it's obvious right ... to go take a drive down the Audubon ! Squawwwwk !

Owen, such punnery is a fine feather in your cap and I'm not even going to attempt a response! I guess I'll just have to swallow my pride and admit defeat! ;-)

i was driving yesterday to a home for a visit and there were two HUGE hawks along the road...both flew up prior to me driving by and i had to just pull off and watch them...magnificent specimens really

Daisy, they certainly snare the eye when you see them in full flight...