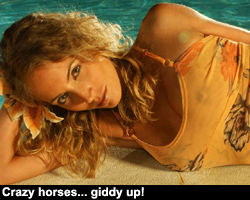 So we'd made it to Friday evening. The kids were in bed. The washing up had been done. All the chores were out of the way.

It was Quality Time at last. Curled up on the sofa. Big bar of choc. Jasmine Harman on TV shaking her impressive decolletage over various locations in the South of France.

And naturally the doorbell rings.

Pains in the effing A.

I did the net curtain twitch and took a quick deco.

Two young guys. White shirts. One in a blazer. Both with neat little back-packs hung from their broad shoulders like turtle shells. Even before I'd heard the American accent I knew they were Mormons.

Here to spread to Word of God and save me from myself.

Well sorry. I was too tired to be saved so I ignored the doorbell.

It went again. A second time.

OK. OK. They were being persisent. But in my house that doesn't always pay. I was more determined than ever to ignore them.

Doorbell chimed for a third time.

(Though I kept my voice down when I said that.)

When are these guys going to get the message? Tom was asleep in bed and I really didn't want him woken up by two well-meaning God-botherers. I resolved that if they tried a fourth time I was going to march out there and give them a piece of my mind.

Then we heard a strange jangling sound. The sound of keys being pushed through our letterbox. The Mormons then headed over to next-door's house.

I went into the hall to investigate.

Sure enough, there was a bunch of keys lying on the mat. Not the keys to the Kingdom of Heaven I might add but our own house keys. Seems Karen had accidentally left them in the front door keyhole when she'd arrived home an hour or two earlier.

Boy did I feel guilty.

I'd been mentally slagging off these pure-hearts in my head and then they go and save me and my family from burglary and God knows what else.

Thank God I hadn't answered the door though. I'd have felt even worse if, mid slag-off, they'd handed me the keys personally with a cheery, "There you go, sir." Their halos would have blinded me. I would have had to listen to them then. My guilt would have had me honour-bound to repay their kindness by listening to a sermon or two and maybe even admitting to the fact that I do own at least one Osmond record (admittedly it's "Crazy Horses", the one they released when they were desperately trying to raunch themselves up to increase falling record sales). I know how guilt makes me behave. I may even have invited them inside and offered them a cup of tea and a biscuit whilst chastely switching Jasmine off in favour of the The Chelsea Flower Show.

But thinking about it some more... maybe the way it happened was the right way?

I mean, I suffer a little post-irritation guilt and learn a lesson or two about the kindness of strangers... and they continue on their rounds taking pride in the fact that they've perfomed a Godly act of kindness in the face of total heathen ignorance.

Isn't that how religion is supposed to work...?

yes - i think it is. a little bit of shut up and pay it forward.
PS i am totally monogamous, but that pic made me catch my breath X

Katie: I totally agree about paying it forward. In fact from this moment onwards I shall forever be keeping a firm eye open for Jasmine's house keys...! ;-)

You were definitely saved!

Ally: possibly in more ways than one!

Yes, but you made them have a glow of having helped a possible disbeliever - priceless

FF: just doing my bit for a good cause as always! Maybe I should get a halo too?

I alway answer the door but won't waste their time or mine indulging in chatter with them.

Last time it was some Jehovah's Witnesses. They had their magazine with them to which I said, 'Oh, you'll be the Sally Army then.' It seemed to cut them short.

Years ago our son answered them with his piercings and a 'Death Metal' T-Shirt or something like.

They didn't return for years after that.

AWB: I have often been tempted to scrawl 666 onto my forehead with a green biro, asnwer the door and tell various religious types that I'm a Satanist.

But I'd feel guilty for lying...

You probably wouldn't have to say anything.

I think that would drive people away even without the green biro tattoo...!

We all jump to the wrong conclusion now and again!

And when I do I like to do it with style!

lmao. I'd stick a book down your trews if I were you, karma is gonna kick your arse. ;)

Missbehaving: if they'd been Catholic I could at least say 5 Hail Mary's as a penance... not sure what to do with them being Mormons. Play Long Haired Lover From Liverpool 5 times perhaps? Acquire a second wife?

hey hey hey!! there are people out here who LOVE, Long Haired Lover From Liverpool:)

P.S. And I am in no way implying that acquiring a wife is in any way a form of penance!

Ah Steve, you impenitent rotter you, not even offering them a cup of tea ! You could have told them you were too busy reading "Under the Banner of Heaven" by Jon Krakauer, to answer the door...

Or you could have offered them some dynamite to pick their noses with ! LOL ! Thanks for that lovely comment !

I think if they'd read that impious comment of mine, Owen, I'd have been in for a stiff lecturing and no mistake and the tea would have done little to assuage their righteous wrath!