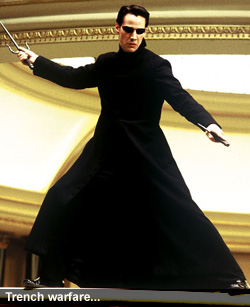 I really should have more sympathy because when I was a geeky teenager I too did this: wore a long black coat even when the weather was warm. Even when the summer heat was beating down onto my angular shoulders like a scorching hammer onto an extremely bony anvil. I persevered. I stuck with the sweaty neck and the rivulets of moisture that ran down between my callow shoulder blades. Just so I could walk around with a swirly long black coat and imagine I was somehow cool and mysterious.

It had nothing to do with painful shyness and a need to obliterate my physical form with a large bail of machine processed wool that had been tailored for a man 5 sizes bigger than me.

And looked an absolute twat (sorry: wassock) in the process. Because I can see now that I did not look cool. I did not look like Keanu Reeves in The Matrix. I looked like a nerd who just didn’t have the confidence or maybe the intelligence to dress in a manner that was climate appropriate.

People were laughing at me behind my back but I couldn’t see them because the huge airplane wing collars of my ex-army de-mob coat were obscuring everything that existed behind my 18 year old ears.

But I can see it all now. Because every time Leamington Spa is blessed with warm weather – as we have been this week – there are inevitably at least 2 members of the local populace who (like me when I was a barely pubescent teen) persist in wearing a huge, ankle-dusting coat of leather so black it looks like it has been woven out of hairs from the devil’s own arsehole.

And instead of reaching out emotionally to these idiots with sympathy and understanding I instead feel an overriding urge to sing as loudly as I possibly can the opening bars of Rage Against The Machine’s “Wake Up” used in the closing credits of The Matrix.

When my family and I are cruising the windy streets of Leamington Spa in our trusty Peugeot, the moment they hear a “Na-na-na-na-na! Na-na-na-na-na!” burst from my lips all eyes will swivel to the pavements in search of the black caped sweat crusader who has crossed my field of vision.

And there he will be. Black coat lopping the top off sundry dog turds as he walks, legs struggling to lift the massive moonboots he is wearing on his feet and his head bowed and dripping inside the inevitable hoody that he is wearing beneath his absurd trench coat.

I’m not sure why it angers me so much. Possibly because I am in some way angry at myself for not waking up to myself sooner. If I could go back in time I’d give myself a kick up the arse (if I could find it beneath all that voluminous material) and urge myself to put on a T-shirt. Get some sun on my arms. Not sweat so much. Let the air get to me and circulate.

Who knows, if I’d done that I might actually have got myself a girlfriend before my 30th birthday.

After all, miracles have been worked with less.

In the meantime: Keanu Reeves, you’ve got a lot to answer for (and don’t even get me started on those stupid ruddy sunglasses)...

Oh I had a wonderful (of course) ORANGE AND GREEN SMOCK TOP MADE FROM SEER-SUCKER (NOT SURE OF SPELLING), am probably not with the latest in crowd but am more than likely being cowtowed to by some distant group....

Amanda: according to Wikipedia (so it must be true) "Seersucker is a thin, all-cotton fabric, commonly striped or checkered, used to make clothing for spring and summer wear" (my italics). So that says to me your choice of fabric at least was climate appropriate.

Not sure about the colour though. ;-)

Oh that made me laugh - and it also reminded me of the time I loved my white DMs with the paint spatter* look so much that I wore them all through the summer (remember the vogue for women to wear floaty summer dresses with clompy boots?) - guilty as charged. Oh my feet were so hot and sore - but I still maintained my fashionable stance

*I didn't throw paint over them - it was the design, you cool black-coated thing, you.

FF: call me a hypocrite but I quite like floaty dresses and big clompy boots. On women, I might add. It's a throw back to my goth-loving days, I suppose. As indeed was the long black [death] shroud-like coat. ;-)

The Dotterel: you'd be surprised. Some days we even have occurrences of... *gasp*... the "man-poo".

I've had a few fashion disasters in the past too. It's fun to watch my teenagers doing just the same - Dan even has along black coat!

Mark: just goes to show there is nothing new under the sun... it all goes round in a big circle. It's been very weird observing the revival of 80's fashion over the last few years. It's made me feel all wistful and "at home" though I have resisted asking my barber for a "Flock Of Seagulls".

you wassock, you! I seem to remember owning doc martins and a combat jacket. Bet I looked a treat.

Heather: I think I have only ever owned 1 pair of DMs in my life... I became converted to CATs very quickly and have stuck with them ever since. I did once buy an ill advised pair of black cowboy boots once though... oh, and a pair of winklepickers.

And I wonder why I have bunions...!

Oh Steve this post made me smile..thanks for that!
I find it weird when my 18yr old wants to wear stuff that I wore first time round..as you say there is nothing new under the sun...

Libby: yes, I wish I'd kept some of my trousers and studded belts now - they seem to be everywhere on today's young 'uns. I can remember nabbing my granddad's ex army coat back in the eighties... wish I'd hung onto it now.

A hot coat, yeah? I had one too, most haut couture itwitwassock for sure. Durban beige (hellbraun) was all the rage so I war it azure blue as the invert/negative on your photonshop palette may tell you.

And seein'ow how hard it itch to stitch in time and stay outta season for whatever reason, frosty and permalike - now as ever - one must endeavour to camoufxxlarge the urge to stick (to one's gums, said the toothless old git) out as a sore thumb and make like an octopus and blend. Bland as I may disappear - as a desiccated fellow of fastidiocy - I must go quackly now and fade to grey... as they doubledeaff comin'to take me awa-aye?! Oi! &s off, don't wear the freds...

Joe: as dapper and sartorially elegant as ever... a dedicated follower of fusion. ;-)

Well, I find the weather in the UK almost always cold so it sounds pretty appropriate to me. It is the lasses who wear nothing in the middle of winter and turn blue who look daft to me.

So don't swing too far the other way - no miniskirts and stilettos in December eh?

Mmm... I remember a long black velvet coat that I used to wear with a long black non-velvet culotte and top and swan around The Roundhouse (Chalk Farm, London) in the early 70's. And yep, didn't care about the weather. I thought I looked cool (or whatever the word was then... can't remember. What's the saying - if you can remember it you weren't there? Yeah...

I like Keanu's coat. I'd have liked your coat too and I wouldn't have laughed.

Trust me, I think we've all made questionable fashion choices at some time or another, I don't think that whole knee-length britches Spandau Ballet thing was necessarily a look that suited me, and judging from old photos I must have bought blue eyeshadow in bulk.
Still love the floaty dress/ DM look though

Gina: but I can pull off the cornbeef leg look with such aplomb! ;-)


Absurdoldbird: where were you when my ego needed you?!

MissBehaving: Oh yes, knee length britches! I'd forgotten those. I can also remember the misery of not being allowed to have drainpipe trousers and white socks like the rest of my school mates.

Steve: Ah 'twas a right of passage, that long black coat.
Just thank your lucky stars you're not a teenager today and don't have to walk around in skinny jeans slung so low down your arse that people can see the skid marks on your underpants.
:-)

Surely it's only the same thing as people wearing a boob tube and a thong in the middle of winter. Fashion calls for sacrifice. Admittedly, freezing or roasting to death seems a sacrifice too far, but it seems people are happy to do it. Ah, what it is to be young and thoroughly stupid.

I used to hide inside a coat. I think I was trying to disguise the me that I thought was too large. Wish I was that size now. I wouldn't be working on the 15 pounds that I should lose. Well, 10 anyway, realistically. Glad you finally found that girlfriend!

Fran: I know... I can barely remember those days myself.

Femminismo: it took a change of wardrobe and a bloody good haircut (it used to be down to my waist).

Oh I don't know. Some of us girls sought out the man in the long swirly black coat!

Possibly not in Leamington though.

And some of we girlies wore long grey 1940s mens coats picked up in the Birmingham flea market (minus fleas, I hasten to add!) and fancied we were something out of The 39 Steps or best friends with Mr Holmes.

Laura: you build me up just to knock me down. I remember the flea market fondly - cheap T-shirts, cheap batteries and dodgy burgers. Those were the days.