Hello? Is That The Marines? 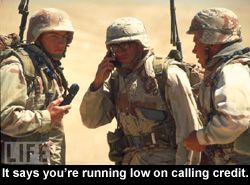 So. My new mobile phone. The shiny new Nokia 5230. It has GPS. It comes fitted as standard. It wasn’t a selling point (or rather a buying point) for me but I feel kind of chuffed to have it.

Even though I can’t ever see me seriously having to use it.

I mean, in over 40 years of existence on this earth I have never ever got myself so lost that I needed a satellite to give me some idea of where I was. I don’t as a rule allow myself to be parachuted into the heart of the Hindu Kush for example. Or take rogue camel rides into the Kalahari.

I might occasionally take a wrong turning on a B road but that’s about it.

But the GPS is kind of nice to have. It’s kind of cool. It’s a new toy with which I can play. And I have played with it. I launched it the other night and waited. Waited for the US satellite several miles up above me to triangulate my position (on the sofa, in my living room, watching The One Show) and report back via a little red dot on a map where the hell it thought I was

It got pretty close. My town, My street. But not my house number. No. It placed me in next door’s living room on their beer can strewn couch (they’re students). Or possibly in the upstairs bathroom. I’m sure all this was news to my wife but possibly explains why I was so incommunicative.

And it got me thinking. See, if I was ever taken hostage in my own house by terrorists (look, it could happen, OK?), held at gun / knife point and my house booby trapped, the phone lines cut, internet access blocked and my ability to hail my next-door neighbour over the garden fence neutralized... my only chance of raising the alarm might be my mobile phone. Quite how I’d operate the touch screen with any degree of accuracy with my hands handcuffed behind my back (steady, ladies) is something I haven’t yet worked out... but there I’d be, smugly silent while the US satellite above me slowly sought me out. Beep-beep. Locked on target. On a military computer monitor in the back of an armoured truck at the top of the street thermal imaging suddenly colourizes my home’s illegal occupants an angry red.

“There’s three, blue leader – one in the upstairs john, two downstairs with the hostage...”

“Copy. Tell the men we go in hard. Shoot to kill. Save the hostage (save the world)...”

A couple of hand signals like they do in modern war films and with a crack of boot leather on asphalt in would charge the marines (yes, yes, I know it would be the local constabulary or, if I was lucky, Warwick District’s armed response team – if they have one - don’t spoil it for me).

Crash! The front door caves in under a strike from a battering ram. The stair rods ping away as steel toe-capped commando boots hurl themselves up the stairs. Red laser gun sights strafe the downstairs living room, cutting through the haze of nicotine and cheap cannabis...

A couple of desultory cans of Special Brew ricochet off the walls as three dead students (looking much as they did in life) slump to the floor dribbling profusely.

Meanwhile, next door, a swarthy looking man lowers his Afghan scarf from his face to whisper intimately into my ear... “So... you think to get rescued, huh? You think to use your infidel Western technology against us? Tch. Very bad idea, my friend. Very bad. Maybe your smart-phone is not so smart, huh? Just like you...”

Now GPS, I like the idea of that kind of gadget but alas my old generation Sony Ericsson has little in the way of extras - but really if I had a phone I'd like GPS. Look a serious post comment from me for a change...

I can't help feeling you're letting the side down.

Made me laugh. I guess Mrs Blogotrolis could use GPS to check up on you too - maybe go bursting into next door if she thinks your at one of their student parties

GPS usage: I couldn't find the builders merchants : I tapped in the postcode and ...a red dot and a green dot...and tada AND ipark..it remembers where I parked - fantastic. In Stratford I had to go to a police station and describe the carpark whilst they tried to work out where I'd left the car!! GPS on a mobile is designed for pathetic women like me that are permanently lost....
I reckon you just wrote a cut scene from Hot Fuzz. Surely you are Nick Frost!!!!!!!!!

Mark: if I was at one of their student parties I'd be shouting at them to turn the music down. Seriously.

Kelloggsville: Nick Frost?! Nick Frost?! I'll have you know I'm more of a Simon Pegg man! How dare you, madam! ;-)

But who would play you, Ian? Matt Damon, Ben Affleck?

Hilarious! Now this is my kind of writing!! Just a little more detail on how the tendons in your neck stand out while hands are tied behind back, please.

Femminismo: they stand out like dried spaghetti being pushed into a pan of boiling water...

MyPhone ain't that up-to-date; okay - it's still smarter than me but it ain't got a built in OOPS thingey like I doot doot doot doot... hello, Steve? You still there?

Joe: sorry, I think you need to crank the engine up a little harder...!

Marines and cuffed hands in the same post..you've got me all excited !!

Selina: your imagination is plainly a hotbed of depravity. Please make a movie out of it (I can probably download it to my phone).

Ralph Fiennes? Rufus Sewell - although that would be a more in depth look at the man behind the brave hero. Bruce Willis could play your dad.

Mmmm that's very interesting, if not alarming to know that GPS is not so accurate after all! A bit cr*p really! How about asking for your money back, Stevenage?

OC: I suspect all GPS is as imperfect - certainly on mobiles - and the rest of the phone is great. Guess I'll just have to live with the threat of never being rescued from terrorists should that fate befall me!

Vicky: sorry, you lost me at "Drew Barymore fighting her way out of trouble after being tied up to a chair..." I do hope there's an app for that. ;-)

Actually it's funny Vicky mentions that - I was thinking of the same - she's referring to the first of the Charlie's Angels remake movies, which starred Ms Barrymore! One of the baddies who Drew's character fancies has a vendetta against Charlie and he uses GPS to track him down to his beach house...obviously he had a more efficient phone...lol...

OC: he had a better mobile phone and Drew Barrymore chasing him? Shoot. Some guys have all the luck.

Yes she's a complete babe in that movie! Enough to send an old queen on the turn.

P.S. Did you receive the Ashes To Ashes synopsis OK?

Can't remember Drew's precise number, but I think some of the digits are 0898?

Yes, received your synopsis with big thanks and have emailed you a reply! Thanks again!

OC: ah... I suspect I have may have already spoken to her, then. Best not try again... the court order is still in place...

Steve, why worry about the GPS, that model of Nokia also has a laser built in which you can activate if you'd read the entire manual and memorize the laser code... then you cut your handcuffs off, while trying not to lose any other protuding bits of anatomy in the process, then you laser through the door and blind your captor, and forget about the Marines...

That GPS could come in handy in Somalia though... a pirate's best friend when trying to make it back to shore...

Hilarious, got my day off to a good start. Now I'm seeing you as Jack Bauer, his phone can pin point an exact location in the desert, say how many people, what weapons they have, what snacks are on the coffee table but he couldn't copy a cassette tape that would save the free world.

MissBehaving: what is this "cassette tape" thing of which you speak?