Power To The People

Like most towns and cities the world over Leamington Spa has its fair share of graffiti. 90% of it is Shaz proclaiming her undying love for Baz Daz Gaz or some New Yoik wannabe gang member deciding to spray his half-witted little tag on the backdoor of a pub or a park bench and inevitably stuffing it up so that it looks like someone has vomited up the innards of a black felt tip pen.

But a glorious 10% of Leamo’s graffiti is political and witty and sometimes even just downright entertaining (I’ve written about three past instances of Leamington graffiti here, here and here).

With the election coming up and the Tory’s poster campaign reaching overdrive (we seem to get a new range of posters here every few days – as quick as us locals can deface them in fact) there has been plenty of fodder for the graffiti artists to make hay with. All I can say is the local arts and crafts shop must have made an absolute killing on aerosols and thick black highlighter pens over the last fortnight or so.

Anyway, although it was not my intention to get all party political and partisan but to stay unbiased and righteously impartial it does seem that the posters of one party in particular have come in for the majority of the Banksy-esque drubbing: 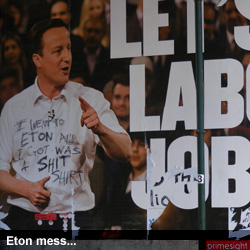 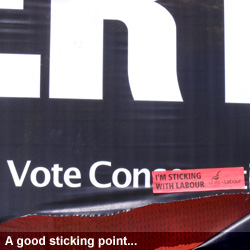 Heaven forbid that this should influence you in any way in your deliberations at the polling stations tomorrow... but it is comforting to know that satire and derision are alive and well in this little backwater of Warwickshire.

*Sigh* It almost takes me back to the bad old days of Maggie Thatcher. Ahem. Ahem. ;-)

Oh go on do tell who are you going to vote for???

Emma: buy me a steak and whippet pie and I might give thee a clue.

That whole poster campaign is beyond parody anyway. It looks like a Nazi rally. All he needs is a tache.

Then again, we should at least celebrate... truth in advertising, at last!

Rol: what he actually needs is an (at)tache case. Preferably one with dynamite in it. The Tory's poster campaign has been nasty, scaremongering bullshit as usual. I'm usually against graffiti but I'm with the street artists on this one.

For the ladies of course it's a no brainer, just as Obama was elected by millions of panting female Obamamamas, Clegg has it in the bag, at least with the middle class mummies who have suddenly come over all faint at the slightest whiff of Clegg. Idea for a perfume maybe: Eue de Clegg ...will get on the blower to the Lib Dems

Emma: maybe Cadbury's could jump on the Cleggy bandwagon and bring out a Cadbury's Creme Clegg? Or would gulping down Clegg's creme put people off?

Back in the Bad Old Days I never came across anyone who confessed to having voted for Thatcher. Either I moved in the "wrong" circles or they were too ashamed to admit to it.

It's the same now. I have not found anyone who says they are going to vote for Cameron. Perhaps they are just too embarrassed to confess to me that they could even consider voting for such a nasty set of homophobic wankers.

Amusingly, though I left a Tory poster on the windowsill yesterday. I had meant to put it on the pile for the fire but got distracted. Hope no-one thought it was displayed there!

Gina: I've got a big stash of aerosol spray paint and black highlighters if you want to give it a go yourself...! ;-)

Oh I just can't bear either of the two 'C's......and am just not looking forward to whatever mess awaits us....

Libby: I know what you mean. I've already taken up fiddle lessons...

Did you see the Conservative one in which Gordon says, 'I widened the gap between rich and poor'. Someone had scrawled underneath, 'Keep it WIDE'. Presumably a rich person .... with a very posh black marker pen?

Last election UKIP put 4 huge letters up on a hill overlooking the A21 as you get to the Tonbridge/Tunbridge Wells turn off. By the next day some one had moved the P to the beginning so it read PUKI. No one changed it back and it gave me a good laugh everynight as I drove past it on my way home. Strangely, they have not put it up this time.

Don't like graffiti usually, but I think these ones are pretty imaginative. Have a look at this: http://liberalconspiracy.org/2010/01/08/the-best-cameron-billboard-poster-spoofs
And apologies if you are a Tory...
Ciao. A.

Yep I love those Tory posters...perfect for ridicule. Love the picture of Cameron on the front page of the Mirror today.

Nota Bene: I haven't seen it yet... may have to nip out to the local newsagent on a chocolate run and have a quick butcher's...

I'm dreading the smug grin on smug Dave's face tomorrow. I would rather see Nick a happy bunny but it's not going to happen unfortunately.

FF: I don't think Mr C should count his chickens before they hatch... there's many a slip 'twixt cup and lip...

"That the manufacture of consent is capable of great refinements no one, I think, denies. The process by which public opinions arise is certainly no less intricate than it has appeared in these pages, and the opportunities for manipulation open to anyone who understands the process are plain enough. . . as a result of psychological research, coupled with the modern means of communication, the practice of democracy has turned a corner.
A revolution is taking place, infinitely more significant than any shifting of economic power. . . Under the impact of propaganda, not necessarily in the sinister meaning of the word alone, the old constants of our thinking have become variables. It is no longer possible, for example, to believe in the original dogma of democracy; that the knowledge needed for the management of human affairs comes up spontaneously from the human heart. Where we act on that theory we expose ourselves to self-deception, and to forms of persuasion that we cannot verify. It has been demonstrated that we cannot rely upon intuition, conscience, or the accidents of casual opinion if we are to deal with the world beyond our reach.”
–Walter Lippmann, Public Opinion

It might be interesting to note that Lippmann is one of the founding fathers of the Council on Foreign Relations (CFR), the most influential foreign policy think tank in the world.

The suspense is killing me ! An historic moment in Britain's history in the making ? So which graffiti work did you do in the wee hours of the morning when I'm sure you weren't sleeping ???

And btw, where it said Vote Conservative (anyway, I guess that's what it said) and part of it was covered over with the sticker about sticking with labour, leaving only a big Vote Con, I won't mention what Con means in French, but it's very naughty ! And very apt for most politicians...
;-)

Ale Vote 4 fishNchips: I wish I had the composite total of brain cells to come up with a quote like that.

Owen: that would be telling... as for con, I may have to go to Google translate right away (though can take a good guess)!

Very funny "defacing" there. Stevenage, you'll be disgusted to hear that I'm currently not on the electoral roll and hence didn't vote...I am sometimes an apolitical creature, it has to be said...

OC: not on the electoral register? Is that down to personal choice or bureaucratic foul-up?

That's so funny! I love it but who are all these people that voted for him. I'm trying hard not to be distressed about it....

That's very funny. But who the hell are these people that voted for him .....and why??

Selina: always good to hear from you and then hear from you again! ;-) I have no idea who voted for him but given the local results here I'd wager that some of my neighbours did. Harrumph. Time to invest in a bigger garden fence, methinks.

“The conscious and intelligent manipulation of the organized habits and opinions of the masses is an important element in democratic society. Those who manipulate this unseen mechanism of society constitute an invisible government which is the true ruling power of our country.

We are governed, our minds are molded, our tastes formed, our ideas suggested, largely by men we have never heard of. This is a logical result of the way in which our democratic society is organized. Vast numbers of human beings must cooperate in this manner if they are to live together as a smoothly functioning society.

Our invisible governors are, in many cases, unaware of the identity of their fellow members in the inner cabinet.”
- Edward Bernays, Propaganda

Great post, I love clever graffiti! I am not that clever with it myself (if I was going to try it, that is...)
Vive la revolutiono!

Curly Wurly vs Maltesers: as long as they're not claiming my tax money to clean their moats I don't care who they are.

Amanda: despite my insinuations, I'd never have the guts to write so publically on a wall or a poster. I'm a graffiti chicken.

Very good. We've had some fun graffiti too.

I've been away a while but hope to be back soon.