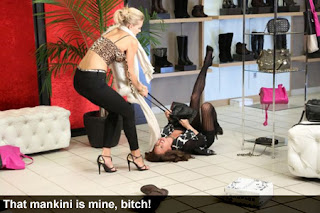 I rarely indulge in “reality shopping” these days – if I can call it that – preferring instead the one-click delights of the virtual shopping basket that allows me to specifically search for a desired item without being distracted by other items on the shelf and without having to immerse myself in the body odour zone of the other shoppers at the check-out till. In truth I’ve become so conditioned to armchair shopping that I have forgotten how to physically browse for goods. I doubt I could even orientate myself around an alphabetized DVD display these days so used am I to typing in the first four letters of a movie title and then choosing the correct one from a drop-down menu.

But at this time of year I break with my usual habits and find myself wandering aimlessly through shopping malls at lunchtime looking for that flash of inspiration that will transmogrify into the perfect present for Auntie Doreen or Uncle Engelbert – basically forcing myself to think outside the tick-box.

I’m happy to report that my fellow shoppers have been polite and courteous to the point of not obstructing me or fighting me for the goods. I’d go so far as to say they’ve largely ignored me, so engrossed are they in their own lives and their own retail forays. This is how it should be,

Today, of course, is Black Friday. Yet another American tradition that has crossed the Atlantic to infect these shores with its salacious money-grubbing ways. Apparently it has something to do with Thanksgiving*, something we Brits don’t as yet celebrate but let’s give our American brethren time (*and not a reference to the way the Ferguson Police Department celebrate the commencement of the weekend). The excuse, of course, is that we are all immersed in the global market these days so ‘special shopping days’ like Black Friday are no longer confined to their country of origin. Whatever. I must confess I have partaken of some Black Friday deals online but the thought of queuing up for real outside a store akin to a rehearsal for the Boxing Day Sales does not float my mercantile boat. I just don’t want to be jostled by a crowd. It’s never enjoyable. And it’s worse when you are fuelled with the stress of trying to beat your fellow shoppers to the last turkey in the butcher’s shop window.

Apparently the police have had to be called out today to various supermarkets up and down the UK to exercise calming measures on the ferociously competitive crowds and there have even been injuries and some arrests. People have been knocked to the floor and trampled for the sake of a Terry’s Chocolate Orange and others have been kneecapped for the prize of the last Frozen sing-a-long robotic doll. That’s not strictly true but although the details are fiction the overall picture is fact.

I can’t help feeling a sneering sense of despair that we – us normal, everyday, average consumers – can resort to such bestial behaviour for the sake of a few bargains. How quickly the thin veneer of social order is scraped away when someone waves a cheap box of mince pies our way. The pictures of the various online debacles resemble wildebeest fighting over the best place at the watering hole, not caring if their neighbour is spilled into the mouth of a patiently waiting crocodile.

It is appalling behaviour. But sadly not uncommon. I can recall a friend of mine once telling me of a furniture warehouse that was closing down in town. On the last day they gave away the remaining stock for free. A great opportunity, you’d think, for poorer families to benefit from some rare business largesse. Not so. The poor families were elbowed – literally – out of the way to enable entrepreneurs with vans to load up as many freebies as they could to resell at a later date at 100% profit. My friend was so disgusted by the behaviour of those around him he walked away empty handed by choice.

It’s the same kind of mind-set at play at these Black Friday riots. Screw thy neighbour in the manner you suspect he is going to screw you.

I’ve heard people theorize that shopping is a modern extension of the hunter / gatherer skills that are deeply imbedded within our psyche. I think this kind of behaviour disproves that theory. Hunter / gatherers were successful only because the activity was cooperative. Kicking an old lady to the floor for a tin of spam is uncooperative to the point of psychopathic behaviour.

At least when I shop on-line and buy the last item in stock I’m only being antisocial and unknowingly selfish.