Just as parents in olden times warned their children not so stray from the forest path or to accept sweets from strangers or to go into a strange man’s house to look at some puppies so the modern parent must burden its offspring with some more up-to-date caveats. Cautionary notes based around imminent celebrity – because there are so many 15 minutes of fame flying around these days a kid has to be pretty abnormal not to have an agent or a regular day time interview slot on some plebeian television “magazine” show.

These celeb rules can be condensed into:

Never get involved with Radio One DJ’s, especially those that do a lot of charity fun runs.

Never be part of a kiddie band if you harbour any pretension of being taken at all seriously as a musician when you are grown up.

And lastly but not least, do not ever sign yourself up to be Alan Sugar’s next young apprentice.

I quite enjoy the adult version of The Apprentice. Mainly because the contestants are akin to the painted wooden ducks on a fairground shoot ‘em up. They are dislikeable in the extreme. They are hate fodder. Pretentious, loudmouthed, arrogant, over-reaching, self-deluded arseholes to a man and to a woman. It is OK to hate them. Hell, they don’t even care. Their goal is earn so much money the negative opinions of us lesser mortals becomes merely a source of amusement to them.

But I don’t feel comfortable hating the kids on Young Apprentice. And yet I do. I do truly, truly hate them. For all the same reasons listed above in their adult counterparts. How shocking to realize that the traits of arseholedom can be seen to flourish at such young and tender ages.

All the arrogance, bile and contempt for every human being around you except for the one who’s got something you want is there, written large in their mannerisms and the way they conduct themselves... combined and augmented by the patronizing, callowness of those too young to fully grasp the way the world works but old enough to grasp the mistaken belief that they do in fact understand everything and understand it better than anybody else on the entire planet, so get out of my way and let me do what I want to do, you nobcheese, all you are required to do is to tell me that I am eternally, megalomaniacally right... now buy me a new Angry Bird themed iPad and shut the fuck up.

What kind of parent allows their kid to be a combatant on a show that makes the boys in Lord Of The Flies look like Rupert The Bear and Friends?

These kids are fearfully adept in their vileness. I sometimes wonder if they are kids at all. Surely they are adults masquerading as kids? No kid can surely be that callous and Machiavellian in their manoeuvring?

I certainly wasn’t at their age.

But I figure it all comes down to this: self belief.

To be truly vile, to be truly poisonous to your fellow man you need an above average sense of self belief. To be a King Bastard or a Queen Bitch you gotta believe in yourself worse than the kids from Fame. Because if you have any sense of self doubt, any inkling that actually, maybe you’re not half so great as you tell people you are, you just cannot stamp all over other people and walk away from it unscathed. Self belief cancels out conscience. Conviction tramples the little voice of reason in your head into oblivion.

Self doubt makes you a better person. It might make you a crap businessman but it makes you a decent member of the human race.

And for that reason alone I hope my kids never have enough self belief that they’ll ever want to be Alan Sugar’s next investment monkey.

And as for Jim’ll Fix It, well, that’s been off the cards for a long while. 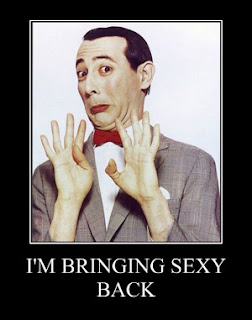 I spat the dummy and now I'm sucking it back up again.

I had a hissy-fit, I was hasty, I erred in anger.

Giving up Bloggertropolis has been harder than I thought it would be. It's been like having an arteficial limb that has seen me compete in the paralympics suddenly ripped off and denied me.

Plus my wife has pointed out that (a) Bloggertropolis is a weird kind of family annal that we and the kids can look back on when Karen and I are old and grey and the kids have booked us into the Tombstone Express Nursing Home and remember the good old bad old days and (b) I am advertizing myself as a writer - flaunting my novels and poetry - and it rather undoes all that good marketing if visitors to this blog then find I'm "no longer writing" anymore.

So with apologies I am kind of back.

My other writing projects will continue (Lord knows I have another novel to write even as I continue to push The Great Escapes of Danny Houdini onto unreceptive agents) but alongside them will be Bloggertropolis. Probably not as it was before. The posts may be a little more infrequent and out of the blue. But continue they shall.

And it feels right.

I am going to have my cake and eat it.

I'm getting all diva on yo' ass and there ain't  a thing you can do about it.

Except, er, maybe not read my posts...