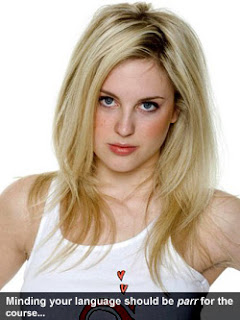 It was only a few days ago that I was complaining about how lank and limp the current incarnation of Big Brother was... and then suddenly we have another huge racism row to entertain us!

Blonde starlet-wannabe (and self confessed most intelligent person in the house), Emily Parr was ignominiously booted out of the BB house yesterday for using the N word. And I’m not talking about “norks”, “nellies” or “nipple-clamps”.

Were the BB bosses right to act so harshly – no mercy and no quarter offered?

I’m not sure that they were. I think there is something of the freshly converted puritan in their knee-jerk reaction. Sure the word is offensive and Emily Parr deserves to be punished for her gross stupidity in uttering it... but immediate dismissal from the house?

Surely that’s using a sledge hammer to kill a fly?

Last year we witnessed sustained racially motivated attacks carried out on Shilpa Shetty over a period of several weeks – carried out by people who can said to be media au fait. They certainly should have known better. The BB bosses did very little to remedy the appalling situation that developed – too little too late at the time and, in terms of the begrudging apology that was broadcast at the start of this current series of BB, too little too late now.

The current housemates by comparison, for all they might come over all knowing and media-cool, are in fact grossly naïve and inexperienced both in relation to the fame world and to life itself. I’d argue that their level of culpability is slightly less than that of the likes of Jade Goodey, Jo O’Meara and Danielle Lloyd, the three witches of the last BB series. I’d certainly argue that in the case of Emily Parr.

Some other form of punishment would have more than sufficed. An enforced wet t-shirt contest maybe? Or to be made to re-enact the famous restaurant scene in When Harry Met Sally... but completely naked? Coupled with a very public, very large, very genuine apology of course... and maybe have her up for eviction three weeks in a row? Let the public voice their opinion on the matter.

Her instant dismissal smacks of retrograde muscle flexing. She’s picking up the tab created by the previous racism row queens.

And wiping the Big Brother boss’s shared slate clean in the process.

And that isn’t fair at all.
Posted by Steve at Friday, June 08, 2007
Email ThisBlogThis!Share to TwitterShare to FacebookShare to Pinterest
Labels: BigBrother, celebritybigbrother, JadeGoodey, Shilpa, television

"Some other form of punishment would have more than sufficed. An enforced wet t-shirt contest maybe? Or to be made to re-enact the famous restaurant scene in When Harry Met Sally... but completely naked?"

I'm sure the lads mags will have her doing that before the month is out.

I'm saving up my pocket money even as we speak...

I think you're right actually, after initially thinking it was totally justified removing Emily from the house, I'm not so sure now. It does seem to be a case of C4 slightly overreacting after the Shilpa debacle of last year. They could have punished Emily in a less extreme way, for sure.

Taken out of context what Emily said could most certainly be viewed as offensive, however I don't think she meant genuine harm. She was just rather naive and not thinking about the impact of what she said. Some words are very loaded and have a very negative association, the "N" word included.

I also think it was taken out of context and no real harm was intended.I think Emily just thought she was being cool using ghetto/street language

“Par for the course”!

It’s rewarding to know that, as well as my crop of the Emily Parr picture, my play on her surname and turn of phrase are both so appreciated!!!

In order to avoid any further misinformation on the subject, and which in this case has gone unnoticed in my recent post, the “Celebrity Big Brother” incident, involving Shilpa Shetty, was earlier this year! The series only ran for 26 days, from 3rd January to the 28th to be precise!! Problems arose on the 16th and Channel 4 intervened on the 19th so the alleged racism was definitely not sustained over several weeks!!!

I stand suitably corrected, TimeWarden... though I still adhere to the points I made!

I agree... it's not fair at all! mother of many is right, too - the word may not necessarily mean to Emily what it does to someone else...