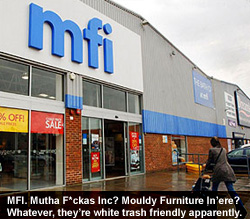 I’m a bit nonplussed by the current MFI advertising campaign.

Not that I particularly care about MFI or their marketing ethos, you understand. I mean, it’s not like I’ve ever shopped at one of their stores or even driven within a 5 mile range of one. I’ve lost count of the number of Boxing Day half price MFI sales that I’ve deliberately avoided over the years. When I’m freshly gutted up on hot turkey the last thing I want to do is shuffle around a mouldy warehouse in Erdington looking at a vast panorama of corner sofa suites and pre-built Devonshire pewter knob handle shelving units.

I mean, come on. I’ve got some taste.

Their new television adverts, however, are impinging on my psyche with some degree of success. Though not in the manner that their marketing experts had hoped for...

The catch line is that an MFI showroom is so expertly put together it’s just like being in your own home. Cue various family groups – all from the scummy end of town – having blazing rows and white trash spats against a backdrop of hastily constructed MFI furniture. The camera then pulls out as Wayne and Waynetta continue their Jerry Springer style dispute to reveal that lo! The couple aren’t in their own home at all but are in fact in an MFI warehouse looking at the wonderful array of suites and design ideas that the store has to offer. Gosh.

So much like home is MFI that the couple have plainly forgotten where they are and are carrying on like they’re in their own kitchen!

Unfortunately the advert stops before they start hacking at each other with Stanley knives and then running upstairs to their MFI Kingsize Divan bed to start shagging each other witless like a couple of bit-part actors from Shameless.

Cos that apparently is what the average MFI customer is like.

That’s not exactly selling the store to me.

So it looks like I’ll be spending Boxing Day at home once again this year too.

Half A Sixpence. Mary Poppins. James Bond. It’ll be dire telly but better that than spending the entire afternoon watching Tracey and Kevin gouging out each other’s Marlborough scabbed eyes at MFI...
Posted by Steve at Friday, June 29, 2007
Email ThisBlogThis!Share to TwitterShare to FacebookShare to Pinterest
Labels: adverts, BoxingDay, Christmas, MFI, television, whitetrash

The TV adverts at the moment that make most want to kill or physically maim are the M&S food adverts. I have to mute the sound when Dervla Kerwin comes on TV and does her When Harry Met Sally impersonation whilst eating a strawberry.

Yes, it's weird. I actually really like Dervla Kirwen and think she has a great voice but it's just too much on the M&S adverts. Total overkill... almost to the point of farce. You just can't talk sensually about lamb joints, parsley and blueberry sorbets. Not without making it sound like a comedy sketch. Personally I blame the script writers and the director!

Actually you've reminded me that I took a pop at the M&S adverts back in December: http://www.pocketropolis.co.uk/blog/labels/DervlaKirwan.html.

I have to admit, Steve, I'll do anything to avoid watching commercials! Dry dishes, make a cuppa, even spend a penny rather than have someone tell me I should spend my money on this or that!!

No doubt I miss some very entertaining adverts but there's usually someone to tell me if I should watch one because it's actually a good bit of telly!

Come Boxing Day, you could always watch the repeat of "Voyage of the Damned" on BBC Three! Probably won't be as entertaining as the James Bond movie though!!

Most of the time you're right to give the ad breaks a miss but very very occasionally an advert will be developed that is better entertainment than the programmes it appears between. One of my favourites stars Mr Jekyll himself, James Nesbitt, wildly gesticulating to a bemused hairdresser and begging her to repair the damage he's inflicted to his neice's hair... while her mother watches from outide presuming him to be telling the hairdresser off for doing it.