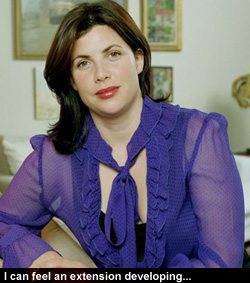 I am not in a position to buy a new house. I don’t even want to. I have no aspiration at all to own a 5 bedroom 15th century barn conversion with contemporized granny annex situated somewhere in the heart of a downy sun-kissed valley in the Wirral.

Well. Actually no. It’s not that inexplicable.

It’s the lure of Kirstie Allsopp.

Now, don’t get me wrong, Phil Spencer, her co-presenter and male counterpart is a great bloke. Sort of a lumbering, genial, Bungle without the bear suit. For an estate agent – or the equivalent thereof – he’s an amazingly decent bloke. Patient, kind, a quip for every occasion up his Stretch-Armstrong sleeves and a knack for finding amazing properties that match his client’s often absurd briefs (I want a 7 bedroom bijou apartment in the middle of London surrounded by 96 acres of unspoiled forest with a salmon lake at the bottom of the garden).

But it’s Kirstie who sells the show to me. She’s feisty. She’s smart. She doesn’t pull her punches for all she may cushion them a little with the kid gloves of televisual diplomacy. She’s not afraid to lock horns with her clients and tell them how ridiculously unrealistic they are being (You want a 1.5 million pound mansion house with stables and a riding school but only have £450K in the pot – it ain’t gonna happen).

But I’ll be the first to admit her attraction is something of an enigma. She’s mumsy. Her voice is kind of plummy and whiny all at the same time – like someone who has graduated with honours from Enid Blyton’s Mallory Towers (which for some strange reason I read as a child). Her mouth is slightly duck-like. Her nostrils flare noticeably when a particularly annoying client has cheesed her off.

And yet she has correctly been voted one of the hottest chicks on TV. An accolade she most certainly deserves. As Dr Evil would say: “Kirstie Allsopp is on fire”.

She’s curvy, voluptuous and lush. She’s not afraid to plunge her cleavage down to the shiny buckles on her shoes. She’s bold and brave and not afraid to speak her mind. One suspects she’s rather dirty in the humour department. And most of all, she’s a fabulous brunette (which always ticks a huge box for me).

And did I mention the cleavage? (Is there an echo in here? Exultantly, yes!)

I’d happily buy a house off Kirstie – any house at all in fact – provided she gave me a full tour of any extensive grounds and a good going over in the wine cellar. Phil could hang around outside and deliver a few quips to camera if he wanted to but other than that he’s free to get the drinks in at the local pub. Get me a Guinness please, Phil, I may be some time in my deliberations...

So it’s really annoying when week after week we’re presented with pensive-faced, mealy-mouthed couples with £500,000+ budgets who constantly turn down the amazing houses that they are presented with for the most spurious of reasons. “Ooh no, Kirstie, I know the indoor swimming pool is precisely what we wanted but the plastic windows... oooh no, I just couldn’t live with them....” “Ooooh no, Kirstie, the house is perfect in every way but it’s facing 2 points due East when really, ideally, we’d like North by North-West...”

Speaking as someone who’s clinging onto the bottom rung of the property ladder with his teeth I find this kind of rich-man’s fickleness deeply irritating. And I think I like Kirstie most of all because she patently shares that irritation. Her clients have more money than taste, they’re getting an hour’s worth of free televisual fame and they get to spend a week of their lives getting Kirstie spread-eagled and oiled-up in numerous bedrooms across the English county of their choice.

Just what is their problem?!

Er. “Spread-eagled and oiled up”? How on earth did that get in there...? Phil, just what did you put in this Guinness?
Posted by Steve at Thursday, June 26, 2008
Email ThisBlogThis!Share to TwitterShare to FacebookShare to Pinterest
Labels: baps, baptitious, Channel4, house, KirstieAllsopp, money, television

to be honest steve...when i am over there i watch the show as well...i don't know what the fascination is...i don't want one of those homes just always liked looking where others lived...the brunette does nothing for me though...cleavage or not...lol

I was going to call you a weirdo but (speaking as a Laydeeee) she DOES have bodacious ta-tas and, since I have a massive and inexplicable crush on Giles Coren, I'm hardly in a position to criticise...

I must admit, Daisy, there is something very nosey in me that just likes looking inside other people's houses... not to the point of housebreaking, you understand, but I'm always interested in seeing how other people live... I guess Location Location Location answers that need in me. Kirstie's cleavage is an added bonus.

Lucy, feel free to call me a weirdo - I'm more than comfortable with my "geekism", especially as I know that I'm right. As you say "bodacious ta-tas" indeed... I had to google Giles Coren. At first glance I though he was the singer from the Manic Street Preachers...!

I just can't see her appeal at all. You mentioned her once before and I didn't know who she was so checked her out. Not that I have ever seen her on TV or anything - maybe I would be smitten if I saw her in action.

But I don't really think I want to start watching property shows. There are easier ways to get to see a bit of cleavage!! I can't bear the sort of people you mentioned in your post so the show would just make me cross. Although I guess I would watch anything if it had Keeley Hawes in it!!

But you enjoy it Steve.

Gina, I think Kirstie is very much a man's woman as opposed to a woman's woman - though I guess we'll see the veracity of that if any males out there care to comment. As for easier ways to get to see a bit of cleavage... do you think you could list them perhaps? With the proviso that they have to be legal and not detrimental to a young man's (and indeed a young woman's reputation).

I must admit to liking both cookery programmes and property programmes. Maybe there's a domestic goddess inside me waiting to burst out. (Would that be an easy way to get a bit of cleavage?) Or maybe, as said before, I'm just a nosey old people watcher. Though if that were true I'd be avidly tuning into Big Brother and I am so not! As for Keeley... well, I do think you and I could start up a KH appreciation society no problems. If Keeley co-presented LLL I'd be buying 5 bedroom detached houses all over the UK and hang the bleeding credit crunch!

I loved the Alistair McGowan impressionist lady, you know the one I mean, doing her impression of Kirstie: "Hi, I'm Kirstie Allsop, tog rating 15"

You know, we watch that kinda renovation programme...usually the ones with toffs who prance off to France with crazy money and even less ideas on timeframes and spend the whole programme whining that they can't understand the locals, haven't enough money to do what they want etc. Boo hoo.

She's enough to make any bloke crash the yoghurt truck !!

Ah Nora, if only she was bareably gorgeous...!

Boo hoo exactly, Amanda, these people have all this money and opportunity and then still find things to moan about! I have no sympathy for them whatsoever.

Andrew, surely that is a prime candidate for euphemism of the week! I salute you sir! (That isn't a euphemism, by the way...)

I actually wondered if Phil was gay. He's kind of cute and cuddly and very amiable as you say.

And Kirsty is rather nice bit of posh, true.

Me and Gustavo love the prog too but are often astounded at the house prices...usually in London...

Hi OC, I must admit I was initially convinced that Phil was gay but Karen assures me that he is not and that hundreds of women feel the same way about Phil as I and other's feel about Kirstie (to tell you the truth I hadn't noticed that Phil had such a wonderful cleavage...) I agree about the house prices - I'm always astounded when people causually announce a budget of "only half a million"... if only!

You're a naughty man Steve!

But I know what you mean about the annoying couples and I too find LLL addictive, though not because I fancy either of the presenters, watchable as they undoubtedly are.

Probably 'cos I love property, which is perhaps an ever sadder reason!

As vices go, Laura, property is probably the most lucrative one to have - if you can afford the mortgage payments! Kirstie and Phil are very watchable and segue rather nicely. I don't mind Sarah Beeny's programme either though I don't find her half as engaging. Her "clients" are just as annoying though...

I haven't seen the program but there are similar ones here. It would be a lot more fun if the clients were people with average budgets and they were taken to stinky houses with mold and seventies wallpaper etc....I expect that if Kirstie waved her baps at you you'd agree to buy anything!

Emma, you're right... the effect would be similar to hypnosis and I'd end up with my own personalized credit crunch and a string of holiday homes in the Algarve (not to mention a barn conversion in Ashby-de-la-Zouche). That woman is dangerous! She needs to be locked up before she ruins me!

I watch Supernanny, and I don't even have kids!

Hi Steve, must confess I've not seen the programme but I will make a point of watching it. One property programme I always enjoy is 'To Buy or Not to Buy', on during the day.

I'm always surprised, though, by the clients' sheer earning power as not many of them strike me as particularly intelligent. Then I remember that brains aren't essential to making one's way in the world, financially speaking. Although I find it preferable not to, you only have to consider the lack of musical ability of Robbie Williams to realise anyone can "get on"!

I must admit Inchy, I'd be quite happy to spend an afternoon on Jo Frost's naughty step myself...

Hi Annie, is that the one with the 2 blokes? I may have seen it but as it was a Kirstie Allsopp free zone I don't think it impinged on my psyche too much!

Too true TimeWarden, I almost wonder if "brains" are a disability in today's society... dumbing down seems to infect everything.

So Karen knows for sure then? I want proof!!

Whether Phil is truly straight or gay, OC, I'm sure you'd manage to turn his head! ;-)

I am SO gratified you think so Steve.

Do you mean grill as in "toast"...? Ulp! That's a bit extreme! Do I have to do the sinister voice thing as well?

Steve - The lead singer of the Manics is the pocket-sized sex-symbol James Dean Bradfield, an erstwhile customer in my old shop. Tiny tiny hands.

Ok OC - I'd better work on my adenoids whilst gargling a mouth full of gin...

You're not alone in your adoration.

But I still don't watch the show.

Rol, you're a man of superlative taste and superfluous TV channels.