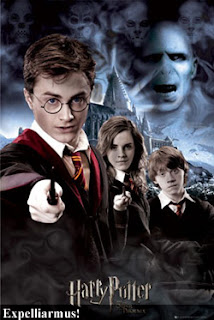 The definition of a good book: you don’t want it ever to end but you’re unable to stop yourself racing through at breakneck speed to the final page...

I completed Harry Potter And The Deathly Hallows over the weekend and I feel quite bereft now that it’s all over.

It sounds pathetic, doesn’t it? It’s just a kid’s book for Christ’s sake! And years ago I was one of those people who steered myself away from the HP books with an avidity that now seems ridiculous. There’s too much hype, I thought. Too much hysteria. Too many people rave about it therefore the books can’t possibly be any good.

That kind of thing.

Then I got into the movies.

I confess, I love them. They get better and better and I’m already excited about the new one that is currently in production. I’m a HP movie devotee.

But even up until the last film – The Order Of The Phoenix – I still refused to read the books. In fact on this here very blog I proudly pronounced that I would not read the books until the film franchise was fully completed.

Once I spied the books on Amazon – the complete 7 in a nice embossed boxed set – I had to own them. And once I owned them... well. What’s the point of having books sitting around the house and not reading them?

So a number of weeks ago I pitched in with the first and kept at it until the final page of the final book...

And it’s been great. It’s been wonderful. Yes, they’re kid’s books but they’re not just kid’s books. They work on many different levels. I’m amazed at how deeply I was sucked into them. How intense the journey has been. Maybe I need to get out more but a series of books hasn’t gripped me like this since I was a teenager. I gave myself willingly to the entire HP world and was happy to lose myself there.

My respect for J.K. Rowling is immense. Speaking as someone who is three quarters of their way through their first novel I take my hat off to someone who can plot 7 so deftly and so completely and still keep the reader hanging on until the very end. It might not be Shakespeare. It might not be Rushdie. It might not be the stuff of a lot of “worthier”, more intellectual writers but you know what? I don’t care. There’s a lot to be said for a good story written so well that you actually wish it were real. For characters that you become emotionally attached to.

Harry Potter for kids? Pah! Why should kids get all the good stuff? It’s too good for ‘em I say.

As for what I do now... well, I need to start prepping for my final Uni module next academic year. Vikram Seth’s “A Suitable Boy” is next on my reading list. Karen tells me it is excellent.

I bet the acting's better in the books anyway...

Yeah, but I kind of missed Emma Watson's dancing eyebrows... ;-)

Hey Steve,
I admire you for being able to read HP 1-7 in quick succession! JK Rowling is a genius. Yet... I don't know, for some reason I can't read too much in one go any more. I read 1-4 in quick succession a few years ago and couldn't go any further. However, I've been reading No. 5 for about 3 months now - I'm not a slow reader but have chosen to read other books in between chapters. It's hard to explain... I love red wine but can't drink too much in one go - I have to pace myself. Does that make sense?
Oh, are the films ever-so good? I've only seen the first couple but have got 3, 4 & 5 lined up to watch soon.

Best wishes and THANKS A MILLION again for my Race For Life sponsorship!! A

I have been reading those books to my kids at bedtime for what feels like years, and probably is now that I think about it! Currently the 10 year old enjoys the Dr Who books....and I can think of worse things that David Tennant at bedtime (well, would make more than my eyebrows dance I'm sure!!smirk).

I tried really hard to read them but just couldn't get into them. Even having seen the film didn't make them anymore interesting.However, my children love the books and the films and SnoWhite named the rabbits Fred and George!

Hi Annie, weirdly no. 5 delayed me too for a while. Not sure why as I really enjoyed it. However the pace really picks up towards the end of 5 and then rockets you along to no. 7. Definitely worth sticking with!

Amanda, I'm not sure what you mean! David Tennant at bedtime? Still, maybe we could do a deal. You get the manic David and Ms Tate could tuck me in for some quality Z's...?

Hi Ally, definitely good names for a pair of bunnies... though I think I would have favoured Albus and Snape!

totally with ya on the HP, steve.
LOVED every sentence.
my kids love the movies, but to be honest, i could give 'em a miss.
well, now i'm thinking about it... i 'fess i LOVE movie-hagrid to bits. snape's rather delish too.
oh, and the disappearing train trick is pretty cool.
maybe i do love the movies after all. but i REALLY *love* the books X

Hi Kate, the movies are not without their faults but I do think they've successfully captured the spirit of the books and the cameraderie between the main characters is so obviously real it's a joy to watch. Alan Rickman as Snape is fantastic... although my personal favourite it Luna Lovegood: I thought the girl that played her was spot-on.