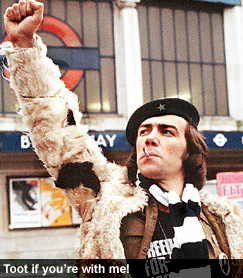 I’m off work for the next two days. Not for reasons of illness or a need to swing the lead, you understand, but because I am throwing my weight behind a noble cause.

I am on strike.

I – along with my staunch union colleagues – have decided to take a stand against the appalling pay offer that the current Government has thrown at us like crumbs from their wine drenched table.

Pah! We laugh at your miserable 2.45% offer when the price of even the most basic of foods is slowly rocketing skywards!

Do I think we’ll actually get the 6% demanded by our union executives?

Not a cat in hell’s chance.

But if we don’t ask (or in this case, demand) we don’t have a hope of getting any more.

I realize there are inflationary pressures holding the Government back – nobody wants to see the country spiralling into recession – but we’ve all got to be able to afford to live. And at the moment I’m as close to the wire as I’d like to come. And that’s even with taking in extra work at home.

I don’t even have a problem with food prices going up. Farmers have had a crap deal for years and years and most, despite the image most people have of them, have made loss after loss for so long that many have gone under. What we’re now seeing is a readjustment that has been a long time coming. Ironically if we’d valued our farmers more in the first place and had allowed them to make a decent living I’m sure these food price hikes would have been felt less sharply.

There are global readjustments too – the global economy is in a huge state of flux. This isn’t Gordon Brown’s fault by any means and I don’t hold him personally responsible.

But I do blame him for not allowing me to bring home a decent wage.

Don’t tell me how not to waste food, Gordon. Karen and I already make every meal stretch into two. Just throw some more moolah my way so I can pay the ruddy mortgage!
Posted by Steve at Wednesday, July 16, 2008
Email ThisBlogThis!Share to TwitterShare to FacebookShare to Pinterest
Labels: government, Karen, money, strike, work

Good for you lad, I'm behind you all the way!

I just don't get it. Why are house prices in England so ridiculous? I saw a program on the telly the other day about house prices in Europe and a couple bought a nice 4bed house in Holland for $200,000. Whereas in the UK that would get you a rabbit hutch. It's fucked all right!

Emma, they've been going through the roof for years... now we're finally experiencing the comedown into reality. The pendulum is swinging the other way to balance things out... suddenly everybody's paranoid about negative equity... as long as I can pay the bills each month and have enough left over for a little fun I'm happy.

Is it possible for something to slowly rocket?

Emily, provided the energy expended is constant and exceeds the gravitational pull of the mass, yes, it is possible for something to slowly rocket.

And another split infinitive (from the phantom SI watcher!)

Anonymous, I shall continue to split infinitives as a protest against the Government and in honour of the english teacher who's lessons I didn't pay attention in...

Ally, glad to have you with us, sister!

yeah, things are getting tight in the best-western world all roight.
part of me thinks that it's good to get back to basics (bread and circuses rather than cake and whatever) and part of me is clinging to my high life.
which is not high by some standards, and rocket-high by others.
still, i hear you.
and i think i'd be striking too X

Thanks for your support Kate - I agree: bread and circuses are the staples that everybody should be entitled to!

Right on, brother! As an ex Branch Secretary (TGWU) I fully support you. I am completely fed up with the nanny thing - surely from their point of view we can't all be as stupid as they imply or we wouldn't have voted for them...?

Support much appreciated Lucy! I must admit I do feel a bit sorry for Gordy - the UK has experienced one of the longest runs of economic stability that it's seen for a long time. It'll be a shame if people forget that. Recessions come and go and are rarely the fault of one person or factor... but people need to be supported by their Governments - not patronized.

Good for you Steve, I'm right behind you. The Politicians are quite happy to give themselves a substantial pay rise...Greedy grabbing buggas, and sod the rest of us...Up the revolution...say I!

Not sure who'll be first against the wall when the revolution comes but well done Wolfie. Hope outcome is good.

Too right, Trubes, I was thinking of the fat pay rises these MP's give themselves only the other day. I wonder if it's too late for me to run for Parliament... or would that be selling my comrades down the river?

Good for you, Steve, and I'm right behind you! Sometimes we have to make a stand even tho' it's not easy. Better to die on your feet than live on your knees (as they say). Last year our Union had some members at a small abbatoir on strike and we eventually got almost what we wanted so hang in there. Let me know if the "powerful" NZ Meatworkers can help! :-)

Not likely anyway. I may well soon be joining you with all my threatened colleagues.

Do let us know what the outcome is.

So sorry to hear that, Laura, what an awful situation to be in. I shall certainly keep you posted and will be glad to stand with you against our cold-hearted, selfish employers! Let's keep the red flag flying!