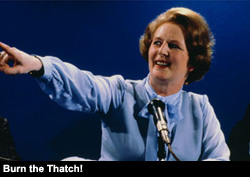 It’s been in the papers. It’s been referred to on TV. But I’m amazed that more people aren’t making a fuss about it.

Maggie Thatcher is to be given a state funeral when she dies.

Am I the only person to think this is an unspeakably horrendous idea? That woman deserves to be burnt at the state, hung, drawn and quartered and her head impaled on a spike outside the NHS HQ.

Churchill got a state funeral and deservedly so. He was a crap peace time PM but he unquestionably steered this country through the dark shadows of its biggest crisis. Maggie Thatcher on the other hand pushed this country into crisis and then kept us there... and we’re still trying to dig ourselves out of the hole her stiff-necked mismanagement got us into.

Thatcher crushed the unions to the detriment of all working citizens. I blame the entire UK privatization fiasco on Mrs Thatch. The money grabbing paranoia that still infects much of this country also started with the Thatcher administration.

We are still living under her shadow, still trying to dig ourselves out of the crap she sank us into.

This woman does not deserve a state funeral. Sorry. She just doesn’t.

Pickle her body for medical experimentation if you must. Bury her at sea if you want her out of the country for good. Chuck her in a landfill if you want to be green.

But don’t waste millions of pounds of OUR money carting her rotting skeleton through the streets of London in a horse drawn carriage, expecting us to throw rose petals beneath the wheels as she passes us by.

Possibly the only good thing about having her body lying in state for a few days is that it will enable (as better comedians have already pointed out) the average hoi polloi to view her corrupting remains and rejoice in the fact that she is at last finally dead.

But they better keep a mop and bucket handy too - cos there’s gonna be a helluva lot of spit flying about if I get anywhere near her.
Posted by Steve at Tuesday, July 22, 2008
Email ThisBlogThis!Share to TwitterShare to FacebookShare to Pinterest
Labels: death, funeral, government, politicalcorrectness, Thatcher

And as R4's The Now Show pointed out last week, you can't give a state funeral to someone who spent their entire political life dismantling the State! She wouldn't approve for one thing! Give her a privitised one where parts of her get cremated at different crematoriums, then they lose her ashes and overcharge her family etc.

In addition she did not get us through WWII & nor was she the only PM to be elected 3 times, so what WOULD the criteria be for according her this honour?

Can't stand the woman! Having experienced the degrading means-testing, regarding poll-tax, during her period in office, I will never forgive her.

Amongst her numerous crimes, Mags also did irreparable damage to the ITV network! Stephen Tompkinson sums up my feelings about the Thatch, pretty well, in "Brassed Off" whilst dressed as a clown in front of a bunch of kiddies!!

David Troughton once said in an interview in "Doctor Who Magazine", a journal not normally considered a hotbed of political debate (!), it would take fifty years to recover from the mess Thatcher made. Indirectly, she's responsible for the glut of knife crime we're experiencing today!!!

I'm in total agreement though I think 50 years is a bit optimistic. The thought that another Tory administration is more than likely on its way into office scares the living hell out of me...

Okay okay I get that you don't like the old girl. But surely the Queen Mum deserved a state funeral even less, all she ever did was get pissed and bet on the horses.

Emma, both of which are Great British past-times. I heard she also loved the snooker. One of us the Queen Mum was, Gawd bless 'er!

AAAAAAArggggggghhhh....those pesky people in power....never doing what I want them to do!!! Queen mum? meant nothing to me....Mrs T? SO SO hate what she did to this country ....why do I have to fork out for everything in life whether I want to or not? weapons, wars, fat prats salaries...... a state funeral for her is just a big big bowl of wrong......

AAAAAAAAAaaarrggghhh.....those pesky people in power - never doing what I want them to do....why do I have to fork out for everything (war, weapons, fat prats salaries, state funerals)whether I want to or not? hated the Queen mum....hate that Mrs T who so cruelly ripped apart this country...just bury her in a box and throw her behind the shed....thats all me and mine will ever be able to afford thanks to their gravy train mentality......

I just can't see it happening Steve.. it'd cause a riot and divide the country for sure. Apart her short-term memory loss, the old fruit is in good health for her age and could live for donkeys years yet. I feel sorry that the media are discussing her funeral while she's still alive... it all feels rather distasteful.

Hi Steve - I actually don’t think she will be given a state funeral - there would be far too much opposition. Personally I never liked her. I am a life long socialist and Mrs Thatcher represents everything I oppose like privatisation of the NHS.

I do have to reluctantly admit she was an effective leader for a short while - until she became oblivious to the advice of those closest to her. Some would argue she never listened to anyone’s advice.

One idea for you to consider – why don’t we put her funeral out to competitive tender just like she did the jobs of many of my friends who were cleaners and catering staff in the NHS?

Ah Steve, you and The Stud would get on SO well. he would also suggest a dance on the grave as well, just to pound the old bag further into hell!

Annie, I suppose it is distasteful to be discussing it while she's still supping her Horlicks... but that makes me want to discuss it all the more! Given her short term memory loss she'll have forgotten all that's been said in the papers by the weekend anyway...

Trevor, what a fantastic idea - let's start canvassing for tenders right now and then go for the cheapest one we can find. That's known as "best value" in the local authority where I work. Of course it could mean wrapping up the old bird in a recyclable bin bag and sending her off to the glue factory... but I really wouldn't mind that.

Amanda, tell The Stud to bring his ghetto blaster - I'll bring the Doc Martens (just to make sure).

Alarming isn't it? There's a petition at this address. It's cut and paste as I haven't figured out how to do the link thing yet.

Thanks muchly Malc - I shall head over there right away!

When you say "thatch" what are you referring to exactly?