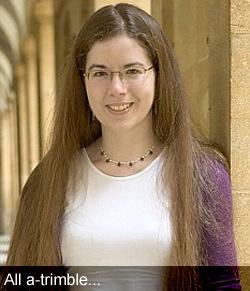 Oxford's Corpus Christi College, who stormed to victory a few weeks ago on the BBC’s University Challenge, have had their memorable victory wiped from the annals of the immortal, their victor’s trophy rudely snatched back from it’s silk pedestal (leaving a hole like a wound in the college’s trophy cabinet) and their academic street-cred irreversibly soiled.

It seems they fielded a ringer.

One of their team members, Sam Kay (no relation to Peter), was no longer a member of the college when the final was recorded and thus was illegible to take part.

Thus the sacrosanct rules of University Challenge were broken rather like the stone slab in The Lion, The Witch And The Wardrobe and now all the magic has been overturned.

Manchester University, who put up a good fight but were ultimately trounced have now been awarded a rather specious victory which, I’m sure, tastes just as much like ash in the mouth as their actual defeat.

I think it’s a great shame: (a) because Mr Kay pretty much did bugger all to secure Oxford the victory and (b) the real star and unbeatable information engine on the team was the legendary Gail Trimble whose intellectual superiority cannot be denied.

Her depth of knowledge was so all-encompassing she has now been nicknamed “Google Gail” and her hair flicks so enticing she has been approached by sundry lad’s mags to do “tasteful photo shoots” (which she has sadly – but probably wisely – declined).

A lot of people found Gail pompous and aloof. But I kind of liked her. She was intelligent. She was articulate. She was confident. Role model stuff. And she’d undoubtedly worked hard to get where she was and her team worked damned hard to win.

I actually think it’s wrong to strip them of their title.

I know, I know. Rules have to be adhered to... but really nobody is a winner in this situation. I bet Manchester are just as gutted by the circumstances as Oxford.

Why not just have a rematch? You can’t get fairer than that, surely?

I know it will cost money – film crews, studio time, Paxman to read out a few more brain-bashing questions, etc – but if the BBC can afford to pay Jonathan Ross £6 million they can afford one more episode of University Challenge.

Come on! Let’s give Trimble a chance!

And with more time in the limelight Nuts may yet make her an offer that she can’t refuse...
Posted by Steve at Wednesday, March 04, 2009
Email ThisBlogThis!Share to TwitterShare to FacebookShare to Pinterest
Labels: BBC, geeks, google, JeremyPaxman, JonathanRoss, lads, money, news, television, University

Yes a rematch would be a good idea...but you know I was a bit surprised by the google gail stuff as she did'nt seem to rally and answer any questions until the last minute and even then we answered most of those ones here in our household! she is undoubtably clever and does seem to be a lovely girl but yet again it's what I call 'miss world' measuring..meaning that the media make a fuss of calling someone the most beautiful girl in the world when in fact she may only be the best of the girls who enter miss world....there are thousands of other girls who are much more beautiful ... Gail is good but not what the media is making her out to be....and she's wise enough to say no to 'nuts' lads mag!!

On French Fancy's blog you said "popping my clogs". What a great expression. I've never heard it. Did you make it up, or was it something someone older used to say?

Deidre, I think nerves and pressure got the better of her in the final as in the qualifying rounds she was like an academic Stormin' Norman - nobody could beat her to the buzzer. However, I accept that there may be an uber-Gail somewhere in the world hidden from the limelight and with no offers at all from lad's mags! ;-)

Marc, I've no idea where the expression comes from at all but it's very prevalent in the UK - like "kicking the bucket"!

You can also find my pic if you google 'Austrian egghead with pie fetish'. Or maybe not ... lol

I agree.
She was very modest and likeable.
Obviously I wanted Manchester to win - but not like this.

Emma, I can't believe that I actually did it too. I came up with this: http://weblogs.variety.com/photos/uncategorized/2007/07/25/bfullertca.jpg!! Wow. You look different to what I expected. Have Nuts been in contact?

Kaz, totally agree. I was rooting for Gail but didn't have bad vibes for Manchester at all - they put up a terrific fight and deserved to win properly... not palmed off with a second hand trophy.

I miss all the real news, I have nothing but Jade Goody filtering in over here.
From what I have read here, I agree on the rematch idea.

It still amazes me that Jade Goody is deemed to newsworthy - I do feel sorry for her current condition but can't say I've ever liked her. Sadly she seems to be famous for merely being stupid and a bit of a chav. Not a great legacy to leave behind, bless her.

I'd missed the earlier rounds, but watched the much-hyped final. Gail did indeed rally, but I was smugly smug when I found myself answering all the art questions in one round when she and her colleagues failed to. Well, not all...Delacroix was a guess I was proud of, but I was crowing so loud I missed the next question, but anyone, everyone should have got the Blake (William, not Stephen). Shouldn't they?

The Proverbs Of Hell is one of my favourite works and you're right, Brother T, Gail should have had her petite knuckles rapped for not getting that one. Call herself a Uni student? Gah!

I'm sure she has a very fine mind but she is not my idea of sexy I must say. I have, perhaps rather surprisingly, never watched University Challenge. I don't like quiz shows at all - odd really cos I quite like Pub Quizzes - I guess it's the sitting watching others rather than taking part myself bit that I don't like. If I watch a quiz on TV I can leap about and wave my arms and yell out the answer and no-one listens to me - it's most frustrating.

But I would make sure I had Gail on my team if I saw her at the next pub quiz I find myself at.

Are they allowed to drink beer on Univ challenge? I find it helps a great deal!

Hi RB, I think I like watching TV quiz shows because I can shout out the answer without risking looking an idiot (except to my family) when I get it wrong! I've never taken part in a pub quiz... not sure that my brain cells and beers mix in a way conducive to accurate thinking...! ;-)

I think Miss Trimble should be put over my knee and spanked for this cheating debacle ! ;)

Indeed. Then she should report to me for a damned good caning. (I'll let her strike both of my buttocks if she asks nicely.)