Gordon, Will You Stop Calling Me At Home? 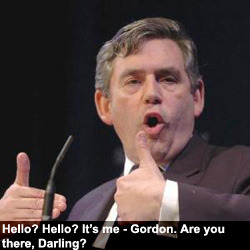 You’d think Gordon Brown, our glorious PM, would have better things to do than to keep calling me all the time, especially when all he’s selling (by the sounds of it) is dodgy debt management facilities. But no, morning noon and night I’m plagued by his unwanted and unasked for telephone calls. I can guarantee that as soon as we get Tom down for a sleep or a midday nap the sodding phone will ring and the recorded message will kick in once more.

And, if I’m honest, it isn’t actually Gordon.

But the posh voice on the other end of the line is very keen to let me know that he’s calling from a “Government backed” debt management company, so Gordon Brown is definitely in the loop somewhere.

(Government backed? Makes me think of coups in other countries for some reason... hey ho...)

The annoying thing is if you hang up they just call back the next day. If you dial 9 as requested to be removed from their call-list you just know your telephone number has now been confirmed as “live” and other cold callers will start snaking their way through your communications defences. And dialing 1471 (caller ID) only presents you with the galling announcement that the originating number has been withheld.

So they get hold of my number to harass me but withhold their own number so I can’t trace them to complain?! Gits!

In the end I’ve had no choice but to bite the bullet and dial 9. So far so good. Nobody else has rung but it’s another black mark in Gordon’s copy book to my thinking.

All I need now is to find out that I’ve been charged for the bloody calls. I imagine it’s a great way to generate revenue.

Or maybe Gordon is paying for them himself on his expense account?

I've never heard of this sort of thing - I must have left the UK before it became prevalent. We went through a spate of sales calls here and I got -free of charge - a new phone number and then went XD - best way I think

FF: cold calling is fast becoming one of the great evils of the modern age (along with Wii and terrorism)... I've just made sure my mobile is ex directory from the new mobile directory service as I couldn't cope with sales gits on that too: I need to have my phone on 27/7 for work.

I got my number removed from the lists so I don't get any UK based cold calls but I do occasionally get some marked "international" but not many (perhaps a couple a week). But they always make me stamp my feet cos they always ring just as I have started to do something from which I do not wish to be interrupted (the mind boggles, doesn't it!!?)

We got them in Australia too so you can't use it as another excuse to want to flee the country, Steve!!

Steve you need to register with http://www.tpsonline.org.uk/tps/
We get VERY few cold calls now. When we do get one (and whilst it was kicking in) I'd say "We're with the TPS". They soon hang up.

We get very few of these calls now. Far less than we did a few years ago. My wife got our number put on some list or other.

When ever I get phone calls that ask for me by my full name and it obviously not somebody I know, I reply by saying 'who is calling' and when they tell me who they are and are COLD CALLERS I say OH SHE IS NOT IN.
To which they reply WHEN WILL SHE BE BACK? my answer is MIDNIGHT and so far none of them have phoned me back!

Well, you wouldn't want to be here either then! We used to get a recorded message all the time from some stupid sod selling carpet cleaning (we have polished wooden floors), eventually we rang them and told them to delete us from their calling list or else. That scared them and they son't ring us anymore, BUT as Gina pointed out the interrnationals still call. I think that is becuase a lot of these calls are out-sourced to India. We either hang up on them or ask them to wait while we get Mr/Mrs So and So and just leave the phone off the hook. The rude sods have hung up on us when we go back about half and hour later!! :-)

There has got to be a way to send reverse signals back up the phone line to cause the computers making these calls to suffer a terminal meltdown... that's what we need...

Hope all those blisters are getting better now... you know, from the platonic riding ! LOL ! For a minute there I thought you were about to start exhibiting delusions of being an empress of Russia...

AWB: I'm about to do the same!

Ally: good ploy - unfortunately most of the calls I get are from recorded messages so I can't even abusively rant at them.

Amanda: I must admit we always let the message play out in the hope it's costing (wasting) them money.

Owen: I'm sure the numbers could be traces somehow but sadly all my contacts at MI5 seem to be busy in the Middle East at the moment... As for the blisters... Drapolene is wonderful stuff!

I get an automated voice phone call, about once a week, spouting off about debt. Drives me mad!

Suburbia: the day after I dialled 9 to be taken off their register I got a call from a "different company" - well a slightly different recorded message - basically selling the same thing. I'm not happy!

telephone preference service is useless against Indian call centres. I annoy them by telling them I am a doctor who can help them with delusions and they need to make an appointment. Often works. Sometimes they swear at me so I have a few choice Hindi phrases to hit back.
tony

Tony: you're a man after my own heart. Terrific idea. I wonder where I can get me an English / Hindi phrase book...?

I have set up a facebook group to pull together all the information out there about who is making these marketing calls and getting them stopped. Please join and help us put a stop to this sort of thing.

Chris: spiffing idea. I shall certainly pop along and add my dubious support.

Whenever i see the post like your's i feel that there are still helpful people who share information for the help of others, it must be helpful for other's. thanx and good job.

Oh really? Here's some very useful information: nobody follow the link above; they're a bunch of self publicizing little scheisters.