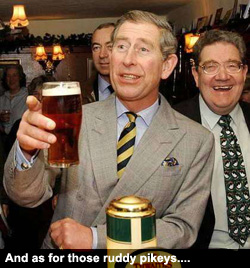 Your country is in peril!

Your country needs you to rally round, gird your loins and perform exemplary duties on behalf of your noble Prince, God save him.

Yes, the call has gone out by the glorious Prince of Wales to rid the land of the grey menace. Forget swine flu. Forget improper use of the expenses system by our doughty MPs. The grey squirrel is threatening the livelihoods of our most respectable landowners.

“The greys are doing immense and increasing damage to hardwoods all over the country and threaten to compromise all our efforts to restore native woodlands...” said the Prince in a beautifully crafted letter to the CLA (that’s Country Land and Business Association to lower class people of unprivileged education).

The Prince – ever mindful of ecological issues – also raised the point that “wiping them out” might be the only way to preserve the red squirrel – the native denizen of these shores who, if it could choose its own colour, would surely be true blue. God save the Queen!

A short advertisement for Izal toilet paper will now follow this broadcast...

So there you have it. A call to arms by Prince Charles no less.

Now, having bought my own house which comes replete with its own humungous garden I am technically a landowner. I might be stretching the point slightly but I bet I could get it to stand up in a court of law.

So I’m taking it as read that by Royal Decree I have been granted license to kill. Admittedly license to kill only grey squirrels but there’s enough of them around that I could make it a full time job. I mean, let’s be clear. The Prince is not suggesting we merely pop one or two of them off. He’s suggesting we wipe out the lot of them. Genocide. Total eradication.

It’s rather a shocking clarion call from our fuddy-duddy Goon loving Prince.

But what I want to know it: is he going to put his money where his murderous mouth is?

Is he going to supply me with the arms to carry out this mission? Hand me an antique musket emblazoned with the Windsor family crest and a bag full of lead balls? Buy me an AK-47 from Ebay replete with newly minted Russian ammo? Or just park a lorry load of cyanide outside my front door where the kids can gain easy access to it?

‘Cos I’m really not fussy.

Hell, I’d even give it a go with a bow and arrow.

I mean this is Prince Charles asking after all. Future King of England and all that...

But I do have one small concern. Where does it all end?

I mean, we murder the grey squirrel today... fine. Do we butcher the mink tomorrow? Do we move onto flora after that – start napalming great swathes of Japanese knotweed and floating pennywort? Because they shouldn’t really be here in the UK either.

Where does it all end? Or, perhaps more pertinently, how far could it be taken?

Puritanism of any kind is never a good thing. It inevitably leads to bloodshed. Or am I just reading far too much into it?

Oh boy, squirrel genocide for breakfast today ! Think of all the squirrel sausages you could make to grill on your grill ! In the US some people make squirrel stew too. Cheers and have an excellent weekend, can't wait to hear what mischief you get up to over the squirrels in your garden...

Owen: yes I'd heard that in some parts of the US squirrels are a delicacy (and a staple in others). I also have it on good authority that Elvis Presley was a fan of squirrel burgers... so a Prince and the King. Evidently there is a divine right for some to predate the poor humble squirrel...!

What those bastards that dig up my flower bulbs and carry them off elsewhere and plant acorns in their place - shoot the lot of them. They sit on the wall at the back of my garden just waiting for someone to take a pot shot at them. I'm quite good with an elastic band - do you think that would do it?

Although I do think they look kind of cute. But not as lovely as the red squirrels.

I expect they'll all join some kind of murdering mob now and set out to get Prince Charles. I know I would if I were a little grey squirrel.

RB: the thought of a grey squirrel mafia or some kind of squirrel militant branch (sorry!) is damned scary. I don't fancy Prince Chaz's survival rate much... given his love of trees he'll be in danger of squirrel attack almost every day. I mean let's face it, squirrels are forever on the look out for big nuts...

lol!!!
taking this to its logical conclusion gun down the whole royal family because as we all know they are krauts (I am a kraut so can say this) and consequently are not native to Britain (real surname Wettin derived from Queen Victoria's husband Albert, who belonged to the Wettin family of Saxe-Coburg and Gotha)

Emma: jawohl meine fuhrer! Ze truth vill out...! I am now imagining grey squirrels goose-stepping along the branches with SS badges in their tails. The Tufty Club was never like this when I was a kid! ;-)

I want names...who the hell is eating squirrels in the US?!

I'm going to put a stop to that right now!

Sweet Cheeks~
p.s. Glad your fire was controlled. Fire is my worst fear.
Kisses to your and your family.

There was talk about using contraceptives because a cull could lead to suffering.

I wonder who is going to fit all those tiny condoms on.

Sweet Cheeks: don't be too angry with me, ma'am, but that Elvis Aaron Presley fella was one of 'em and a whole heap o' po'cracker families from somewhere or other according to the documentary programme I saw but I didn't catch no names 'cos I was cooking up the biggest gator you ever did see for a wholesome stew...! ;-)

AWB: maybe squirrel family planning staff are secreting "morning after" pills into all the acorns?

And I thought it was the Red Menace we were supposed to worry about.

Bit of a cheek that a species whose own numbers are out of control gets to decided what other species needs culling!

I propose the Morning After pill for our Grey Squirrels if action must be taken.

well, a vote from the antipodes probably doesn't count, but i'm thinking we should just skip charlie and wills and go straight to harry.
hmmmm - don't chop my head off X

Laura: exactly - we're hardly indiginous to these shores if Dr Alice Roberts is to be believed, we've spread out from Africa and decimated the natural populations of flora and fauna of the rest of the world... do we need culling too (or "wiping out" as Prince Chas so emotively put it)?

Kate: your head is fine where it is. I think Wills would make a fine King... Harry too but I think he's be something of a loose cannon like his grandpa...

Well I'm all for it.

Think people, we could televise it.
Stuart Hall could come out of retirement and we could pitch town against town, city against city, young and old, migrant and indigenous . . .

Sorry, got a bit carried away there.

Inchy: you are still talking about the squirrels, aren't you...?

Televising it isn't a bad idea. Something in the style of It's A Knockout maybe?

Nice one Steve.
Exactly - where does it all stop?
I could wish for fewer Canada geese in the local park but they are great with their goslings AAh!
But rhododendrons are taking over so I wouldn't mind a cull there. Presumably they don't feel the pain.

Steve, did you see what the Lone Grey Squirrel had to say about all this ?!? If not, go quickly to :

Oh, I worry for you all in teh face of such leadership!
Mind you, you can't smoke cigarettes now in so many places that I'm sure sooner or later the drinkers will be lined up and told off as well.
We don't have squirrels here but the call went out amny eyars ago to rid our shores of various types of "weeds" that were imported from the Motherland (eg gorse, old-man's-beard...)
I guess you could always go for complacent head nodding...or maybe this is the 2nd job opportunity you've been waiting for "Steve - Squirrel Eradicator at your service m'lud"

Kaz: it could all be taken way too far is my fear... especially on a dark morning that has seen the BNP grab 2 seats in the European Parliament...

Owen: I shall certainly check it out when I have a free moment!

Amanda: it's certainly an option but I don't think I have the right nuts for the job...!