I Am The God Of Hell Fire And I Bring You... 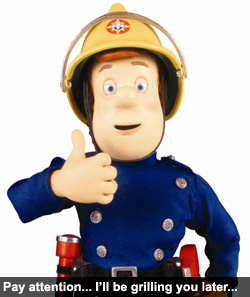 Fire took us by surprise about a week ago.

It was invited into the house by some frozen sausages which we were mercilessly grilling (not Gene Hunt style) for our tea.

We’re not sure how it happened. We were being pretty careful and vigilant. Doors locked. Windows bolted. No cold callers signs all over the place.

But maybe that was our mistake?

This was a hot caller.

In the time it took us to take our eye off the ball great big yellow flames were licking their way out of the grill. It seems that the sausages went from being frozen to jetting gouts of hot fat onto the grill bars like a small time crim singing under the blows of police brutality.

The jets ignited immediately and fulsomely.

Weirdly my Corporate Fire Training (fanfare please) both kicked in and didn’t kick in.

I opened the grill door. Big mistake. The sudden in-rush of oxygen fed the flames and they got meatier. I’m not sure even now if this boded at all well for the sausages.

I shut the door again rather quickly but it was too late. The flames had taken the grill by storm and were now cooking the cooker.

I reached for a tea towel and performed the old “soak a tea towel and drape it over the flames” trick. Tick please. It worked. It took a few seconds - seconds in which Karen and I began to wonder aloud whether we should get the kids and the DVD collection out of the house for safe keeping – but it worked nonetheless.

The flames gave a last gasping flicker and went out. Possibly to someone else’s house. Possibly on the razz. I’m not sure. Given the mess they left behind I won’t be inviting them back again anytime soon.

And that was as close as we’ve ever come – and as close as we ever want to come – to having a house fire and burning down everything that we’ve worked so damned hard for.

It was a short lived but rather intense experience.

The cooker even now still looks petulant and sooty.

And the sausages, when we finally ate them, were undercooked.

It seems they’d kept cool under duress and refused to spill the beans...

It could have been so different.

AWB: for a brief second or two... I really feared it might be.

What you need is a Super Defrost Tray. We swear by it if we forget to take food out of the freezer. http://cgi.ebay.co.uk/SUPER-DEFROST-TRAY_W0QQitemZ120326743929QQcmdZViewItem

Tenon_Saw: cool - literally! However we've found an even cheaper solution: putting the sausages on the bottom shelf of the grill totally eliminates their fire starting tendencies...!

That's got to have been scary but you managed to make it sound so amusing, some of us may try it at home;)

Missbehaving: hmm... maybe I need to add a warning to the bottom of the post? Something like: the incident above was handled by an expert with 40 years kitchen accident experience... don't try this at home, kids!

I have always known sausages are EVIL. The devil incarnate, if you will. Obviously I'm right. Steve, you will have to go to make sure your kitchen is 'steaked out' nest time to ensure minimal frission (or Fresian?) - so glad your worries were shortlived (like bobbies but thats another story and not for bedtime!)

Amanda: there is nothing worse than an evil sausage that has risen up from the depths of hell (or indeed from a hasty put together barbecue). Fishfingers are much more Heavenly though burgers tend to exist in limbo until their origins are divined... As for "bobbies"... not sure what they are? I take it you're not referring to policemen? ;-)

in NZ we're s'posed to phone the fire brigade if something in the kitchen catches fire.
but i never have.
X

Oh dear, that is terrible... I imagine your faces were both rather ashen colored afterwards with the shock of it. Well, old pot, that'll teach you to be calling the kettle "black"... I imagine it was the case though...

Hope you didn't get singed in the process either ! And you managed to eat them anyway... you could have given them to "char"-ity...

Maybe next time the bbq can be done outdoors? Just be careful with the can of charcoal starter fluid !

Kate: wow. If people did that here I suspect the fire brigade would have neither the manpower nor the resources to be on call to put out other fires!

Owen: the one lesson I have learnt from this is that primitive man didn't need two sticks to start a fire... he just needed a sausage. Mammoth if necessary but preferably pork.

Oh my goodness. That does sound scary.

Whenever I cook sausages I always turn off the smoke alarm just outside the kitchen door because one sizzle and it goes off (and it's horribly loud) but perhaps I shouldn't!!

Amazingly I've never had a fire (amazing because I am very very careless and inattentive when cooking).

I'm glad all was well in the end though.

RB: the sausages took us by surprise... normally it's the fishfingers who are the trouble makers and trigger the smoke alarms... it was a like a weird take on Animal Farm...!

There's no doubt sausages are a problem with smokey fat burning. I found a type of smoke alarms that does not get triggered by cooking fumes. It's called an optical smoke alarm (or toast proof alarm)and can be bought from most major electronic retailers.

OSA: thank you for your advice and I shall certainly have a butcher's as burning sausages are a regular occurrence at our house and the ensuing noise often disturbs our neighbours.