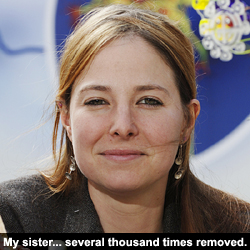 A short while ago – in zestful arrogance – I wrote a sarcastic email to some poor enterprising con man in Burkina Faso. I took the mickey out of his risible attempts to get me involved in a multi-million dollar scam and scoffed at the very idea that my Great Aunt Matilda could have enjoyed sexual congress with a tribesman of that region a century ago producing an off-shoot of the family tree that would, in 2009, name me as a the sole heir to his dubiously misbegotten fortune.

Of course I was aware of the scientific theory that we all ultimately descended from a single tribe in central Africa many thousands of years ago but ignored it in favour of cutting edge satire and a cheap joke about Kunte Kinte being my long lost cousin.

I now bow my head in shame.

Dr Alice Roberts (if my doctor looked liked her I’d become a hypochondriac) has investigated and, to my mind, proven the theory as fact beyond all shadow of a doubt. Her programme, The Human Journey, has been essential Sunday night viewing for the last 4 weeks.

And what a terrific gig for Dr R.

She got to sashay her pert little tush across every continent on the planet and got her hands wrapped around some amazing looking bones. Lucky girl.

But it wasn’t all sun screen and sultry pouts to camera for Dr R, Oh no. She worked bloody hard too. She risked a night alone in the African bush, fingered lots of ancient skulls in dusty museum store rooms and correlated and produced a work of such superlative televisual research that it stopped me mourning the absence of Lark Rise To Candleford.

It seems that we did indeed – all of us – descend from one single tribe that emerged out of Africa about 50,000 years ago. A tribe that gradually worked its way up into Europe, jogged across into Asia and Australasia and finally made the big leap into the Americas about 14,500 years ago – spreading its bounteous seed like wild oats as it went. Genetically the theory has also been proven. Undeniably. Irrefutably. The men in white coats say so. Their scientific barcode thingies prove it.

We are all of us related.

You are all of you – including the con man in Burkina Faso, including Dr Alice Roberts – my brothers and sisters.

Technically we’ve been inbreeding for years.

No wonder the planet is in such a God-awful mess.

Well, I'm quite at ease with th thought you being my bro' Steve.

But the lovely Dr Roberts as my sister?

I enjoyed watching her striding around 'Coast'

Yes, bro', I seem to recall she had startlingly red hair then too...

I always wanted a bro'!

Given we are of the same gene source, amazing how we go about so murderously massacring our relatives on such a regular basis all over the planet... if one looks at the Earth as a tiny molecule of water in the vast ocean of the universe, of course we are all related, all us parasitic life forms that sprouted on this barren rock... but how can this be, this notion Dr R is propagating of a tribe 50,000 years old ??? Doesn't she know we were all created only 6000 years ago and that evolutionary theory is a pile of hogwash ???

(that's a joke, Steve, but believe it or not, there are people who take such theories seriously, particularly in the USA... are there any creationist movements in England preaching the 6000 year old origin of the Earth ? Scary folks if you ask me)

And speaking of hereditary issues, did you know that diarrhea is hereditary ??? Answer : Of course it is, it runs in your genes/jeans...

Well, come on by any time you happen to be in France, brother, so I can get you a beer and we can discuss these things more seriously... ;-D

Oh yeah, your African marlarkey letter was where I first recognized your wicked writing skills, did any cash ever come through the bank wires ???

So I guess it can be considered a wise thing to get all that "old money" out of Africa now then? Tell you what, Brother Steve - since I trust you implicitly how about you claim the dosh and then you can divvy it up amongst the rest of the famdamly? I'll just pop down to the BMW dealer now while you're about it....

Suburbia: you got one. Well. You got several billion actually.

Owen: the other sad thing is that when the European explorers reached the America's a few hundred years ago they didn't recognize the indiginous people as being at all related and saw them as sub human... and the rest they say, is history. We really are a very stupid species sometimes. Maybe we shoudn't be allowed to breed? Not without a license anyway. As for the money - I ain't seen nuthin'. Not a single dime.

Amanda: now I know that technically you are as much the poor deceased guy's next of kin as I am but his bank manager (also a relation) wrote to me personally and wishes to entrust the money to me... however, as a gesture of goodwill (you have after all offered me the use of your rabbit hutch should I ever come to NZ - thank you, sister) I might be able to bung you enough cash for a Skoda. Wheels are wheels after all, right? ;-)

Off at a tangent, but my Dr is a rather attractive Polish woman.
I've recently had cause to seek her professional advice on a testicle related emergency, the examination of which required her to call on the attendance of her equally attractive Indian colleague in the capacity of chaperone whilst my ivories were being tickled.
As I lay there, naked from the waist down, I was strangely reminded of my 30th birthday celebrations in Amsterdam, except no money changed hands this time.

That's why I love you so much!

Inchy: hmm. I occasionally get an itchy bollock... I wonder if Dr Alice would mind taking a quick shufty...?

Sweet Cheeks: thanks sis - thought I might pop over to your place for Sunday lunch, if that's ok? ;-)

As we're all brothers and sisters, you'll be sharing the cash out equally then? ;)