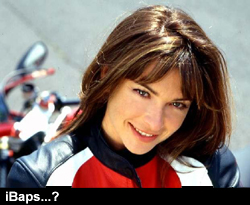 With the advent of the iPhone, the iPod and the iPad I’m feeling the need to cash in on this bandwagon of “convenience technology” by throwing my own hat into the ring. I’d like to run a few ideas (or should that be: iDeas) by you just in case there are some enlightened iNventors or honest admin assistants at the Patents Office out there who’d be willing to take a gamble and make us both some money.

My first concept that is up for grabs is the iPub. Yes, the mobile pub in your pocket. Enhancing hologramatic technology you can have a virtual 3D pub in your pocket for the fraction of the price of a pint at Spearmint Rhino. Just toggle between Irish / East End / Corrie / Wine Bar / Polari for the ambience of your choice and let the flock wallpaper and the smell of urine and sawdust pixelate into HD being before your very eyes. With programmable jukebox music, Easter egg lock-in option and “Easy Lay” expansion software you need never have to suffer a miserable night in on your own again. Comes with a choice of 3 barmaid personalities: Keeley Hawes, Meryl Streep and Beryl Reid and warm beer (depending on how cool you keep your trouser pockets).

Concept no.2 is the iPrayer for those who want to bring their worship into the 21st Century. This little device comes complete with the religious icon (ha ha) of your choice and seamlessly integrates with all modern social networking sites – Facebook, Twitter, MySpace – and allows you to share your devotions and votive offerings with the world wide web. Why get on your knees and bang your head against a pew when you can email God or send him a Tweet or two? There is an optional Confessional mode for those of you with Catholic leanings – though be careful to run this in silent mode. For those of you with Old Testament sympathies the device also doubles as a sizeable and weighty stone that can be used to punish adulterers and those who have given their seed unto Molech. Device is waterproof up to 10 metres and comes with an easy-kleen screen.

Concept no. 3 is the iPimp and yes I am scraping the barrel here. Choose from over 50 accents to give your iPimp the national flavour of your choice – Eastern Bloc, South American, Cockney, to name but a few – and indulge yourself electronically in the seedy world of human trafficking. An advanced touch screen menu system will allow you to choose between violence or drug addiction as the method of controlling the merchandise or simply purchase an optional software upgrade that will give your iPimp a Huggy Bear “skin” and render all your transactions somehow fun and jocular and Carry On-esque without a word ever having to be said to the wise, know worrimean? The iPimp comes supplied with a his ‘n’ hers virtual reality enhancing body suit with over a million electronically fired neurone amplifiers to make your experience as real as possible. We recommend that customers buy the iPimp in conjunction with the iPrayer in order to make the most of the inevitable post-transaction feelings of guilt, remorse and self disgust and the need to absolve oneself of an emotional and moral stain.

Concept no. 4 is the iPrick. This tiny, tiny device... yeah, yeah, I think this joke has just about run its course now. If anyone from The Gadget Show is watching I’m available most evenings for interviews but please make sure it’s Suzi Perry and not Jason Bradbury. Ta.

Would Julia Bradbury do?

I want an iPub now. Maybe an iClaudius (for those |Roman re-enactments). An iSpy, for easy transport across eastern bloc borders? A handy little iFive - so much more hygienic...

Tenon_Saw: Julia Bradbury would never be a mere second choice. She can run her sensuous digits over my touch sensitive screen anytime.

Brother T: I sense this iDea thing could run and run. Personally I could have done with my own personal iBog when I was in Egypt (could be marketed as an iLav to the middle classess and an iToilet to the nobs). Right now, given the poor state of my spectacles I could do with a new pair of iGlasses. Geddit? Geddit? Didyer? Didyer? Oh never mind...

(whispers) I've never used an I-phone or an I-pod. I do have an mp3 player but it's not a bells and whistles one. However, stuck as I am in this region of poky little French bars with no ambience whatsoever, I do like the idea of a I-pub, barman in the mould of either Kenneth Branagh (my favourite actor) or Brandon Flowers (my favourite singer) - although, as Meryl is my favourite actress, I'd be happy to talk film shoots with her, whilst she pours me a half of cider.

FF: as soon as I've sorted out the distribution network I'll make sure you receive an advance gratis edition... I'll do my best regarding Kenny B but if the money supply is a little slow you may have to settle for Kenny Lynch.

I've a real soft spot for Suzi Perry, a goddess!
A GODDESS I SAY!

you forgot the iWank ...the portable orgasm...just insert in the relvant orifice and electro currents guarantee release. Warning don't use on public transport or while operating heavy machinery!

Emma: of course, men have secretly had the iWank for years. It's a handy pocket-sized device with 5 flexible curlable digits that can grip "things" better than Action Man's grippable hand, has various speed settings and can be instantly upgraded with a variety of pornomag add-ons and streaming internet apps... it's called a hand.

I quite fancy designing an iWank T-shirt though. I think it would be an instant seller. You could sell a box of tissues with every purchase.

Löst Jimmy: good point. I need to make sure a disclaimer is printed onto the packaging...

There could be compatability issues with the iWank and the iPrayer. ( I'd follow that up with some witty and relevent techo-speake, but I don't know any) ;)

You are toooooo funny! The iPub would have helped me today. I have little tolerance for alcohol. I mean, I like it, a glass of wine or some dark beer, but I get very tipsy without even trying. My husband says I am a very cheap date. Anyway, I had 1/2 glass of white wine with lunch and it took me three hours to recover. iPrayer! Silent mode! Glad I visited.

MissBehaving: to be honest I suspect the iPrayer will merely enhance the power and efficacy of the iWank...

Femminismo: sounds like you could have done a couple of rounds with iParacetamol...!

Your post and the comments that follow have had me laugh so much and believe me I could do with that. You are very clever and clearly on a roll with this one.
(I can't come up with an iDea of my own, because as you know I'm techncially inept.....)

Selina: that's given me another iDea - iNept. Some sort of device that allows people to become virtual techno-nerds and the ambience of understanding quantum computing terminology... hmm. Leave it with me!

haha so funny and the comments had me giggling too - compatibility issues between the iWank and iPrayer - so funny.

Suzi Perry is gorgeous - I pretend to only watch to look at the gadgets but I don't think I fool anyone. Shame I can only look - would much prefer to test out the iTouch experience with her!

Gina: you may have to form a disorderly iQueue behind me and Löst Jimmy...!

What brilliant ideas! Okay, yes, iDeas...I love the concept of the iPub, perfect for a lazy oath like me who feels increasingly phobic about venturing into Central London. Interesting choice of barmaids too, heh heh!! Are these your ideal women, Stevenage? And the Polari bar....erm, what kind of clientele would frequent such an establishment, may I ask....?!

In fact thinking about it, your predictions are alarmingly accurate...

OC: well, I'm looking for an iPartner if you want to come in on the ground floor...? You must have some London connections that I could utilize... some business contacts, a hotline to Berverly Craven... anything at all that could help get my fab iDeas into the FT stratosphere...!

Joe Bloggs: an iWish. Now that would be a product worth iNventing.

religious iCon?
Good post, and you have spawned a heap of ther ideas too. Well done, best get it onto patent ASAP.

Amanda: unfortunately the people at the Patents Office think I am an iDiot. Damn their shortsightedness! I wonder if Richard Branson would be interested?

Suburbia: maybe all I've really done is invent an iJoke...?!

Right Steve, lets the get the finance sorted... and while you're at it, can we have a crack at the iSnooze (for sleep-deprived parents) the iVac (for those who hate the bloody hoovering) and the iPress (ditto, the bloody ironing).

The Dotterel: how about an iSlave? Mind you, that's not very PC... how about an iNanny or an iAu Pair? That would take care of everything... including the iWank. ;-)

Everyone has at least one iWant as far as iKnow :)

cannot think of a comment worthy of leaving re this subject cos i'm so out of my depth when it comes to wit and technology when they are combined that is.
or even when they are not, come to think of it.

so i'll just be very predictable and boring (is there an app for that?) and say
funny post
and
funny comments too.
jolly good show.
(i think that's the first time i've ever said, 'jolly good show.')

Clippy Mat: hmm... an iWit app. Witty one liners and rejoinders literally at your fingertips... iLike it!

So this is where you hang out now, with the rest of us iBlogger.com peeps
Still laughing about the iWank, where did that come from? Haha, sorry...

Steve you are the Master of the witty rejoinders and I'm sitting here, sleepless in Adelaide, almost wetting myself. I could probably do with an iLoo right about now and sorry that was the best I could come up with :)

Gypsy: I suspect my ramblings are just the product of an iDiotic mind...!

Emma: sounds good. I hope you're not going to be a silent partner though 'cos I like a lot of noise. ;-)

OMG I am so going to have the get the iPrayer so I can tweet God whenever I want. That would be SO convenient.

Organic Motherhood with Cool Whip: apparently God has a lot of Followers but I'm not sure how many people he Follows in return...