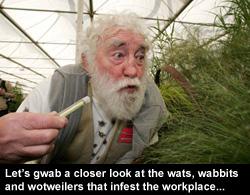 Welcome fellow hunters to the wancid world of big game hunting in the office enviwonment... Now this is a dangerwous activity, not for the faint hearted or for those of you with a nervous admin portfolio. So be warned. Things could get vewy twicky.

So. Popguns at the weady, pith helmets firmly ensconced... let’s pwoceed on our way deeper into the office undergwowth...

First off, let’s see what we can spy at the watering hole. Shh, now. They’re easily spooked and you don’t weally want to be caught in the middle of a buffalo stampede. As Simba fwom Lion King well tell you, a violently thwust bulldog clip to the face can quickly end anybody’s woyal ambitions.

Ah, here we have the lesser spotted Stationewy Cupboard Gazelle... a nervous and flighty beast that is easily startled and that can often be seen gwazing on Bic Pens and those Tippex mice things that make your cowections look like they’ve been snogged by Michael Jackson. This beast is welatively harmless and is perfectly happy pwovided it has a steady supply of paperclips and camewa battewies. At the first sign of twouble it will merely wun and wun and wun. It’ll just wun away, take my word for it. It’s a big softie and hardly worth the twouble of hanging it’s doe-eyed head over your mantelpiece so we’ll move on.

OK. Now we’re in dangewous tewwitowy. The office mangwove swamp. This is cwocodile countwy, folks, so watch where you step. In fact, there’s one there, wight now. Lurking by the photocopier machine. Its big career mashing teeth weady to wend any wary twesspasser limb from limb. The photocopier is a much sought after wesource in the jungle and the beast that contwols the copier contwols the entire food chain. You set off a pwint-wun without the say-so of the cwocodile and you’ll find yourself on the wrong side of those big flesh wipping teeth before you can say “photocopy subsidy”. It’ll be no good you complaining that evewybody takes fwee photocopies evewy now and then, that some beasties pwint off entire web sites of shoes and handbags... you cwoss the cwocodile and you’re gonna get cwapped on from a gweat height. Twust me on this, fellow hunters, it just ain’t worth the wisk.

Let’s climb up now into the twopical wain fowest. The lair of the Stabu-inthebak Snake. This particularly venomous serpent is never ever seen until the last few seconds before it stwikes and even then you may be so blinded by the clouds of venomous mist that it exhales awound itself that all you'll see is the pitiful flutter of your own blood dwenched P45 as it splatters down to the undergwowth. Game over. Cuwiously the Stabu-inthebak Snake doesn’t actually eat the prey it kills but pwefers to munch on Müller fwuits of the fowest. It kills purely for the fun of it which makes it a far more dangewous animal than those cweatures that do actually kill for food.

Lastly, we have the kings of the jungle. Those at the very top of the food chain. Now, I know you’re all expecting it to be a lion. A mighty lion like the one Elton John sang about that had the voice of Darth Vader. But you’re wong. Completely and utterly wong. The jungle is wuled and contwolled by a team of monkeys that spend the entire day chattering and arguing and picking fleas out of their own backsides in air conditioned offices poised on the tallest peaks of the fowest and never actually weach an accord about anything. Hence all the tumultuous chaos and wecidivistic naughtiness that occurs among the lower orders of the jungle. It’s totally wild in here, folks. Wild and fewociously dangewous!

The only option is to get the hell out of the office environment and take a job in much less vicious suwoundings. Guantanamo Bay perhaps or even as a bodyguard to Osama Bin Laden.

This concludes your tour with Corpowate Jungle Tours. Please tip the dwiver as you disembark from the shit covered vehicle.

To survive this kind of jungle Steve you need to be as clever as a chameleon so you can change your spots whenever needed and so nobody will know your true feelings.You also need to be as fast as a cheetah so the other animals cannot pin the blame on you for ANYTHING!And finally you need to be as clever and cunning as a fox so they have no idea what your far superior brain is craftily schemimg whilst they are busily content with nit picking :)

Ally: sounds like my best bet is to turn myself into a Chimera. That way I'd blend in with everybody else...! ;-)

Perhaps we all need to get out of the jungle of workplaces and back to real jungle, becoming hunter-gatherers again, living in tribes... as the work-a-day bullshit just keeps getting deeper and stinkier, it's been rising all around us for years now... and like rats who have been conditioned with "trained helplessness" techniques, we just take it, as valid alternatives have not yet become clear. But perhaps they will one day soon...

Now, what was that old saying about "Walk softly and carry a big stick" ?

You could try wearing a loin cloth and playing the part of Tarzan, but I sense that Cheeta the Chimp would be more your style.

Owen: personally I like to walk loudly and carry a big "fuckoff" rifle.

Gorilla Bananas: from one primate to another I'm taking that as a compliment.

Thought I saw you lurking around my office earlier.

LCM: were you the leopardess with the swishy tail who kept trying to claw my face off?

I worked in an office once... a very long time ago. Clearly thinngs have changed since then. All I remember is the clock grinding the seconds as slowly as was possible according to Einstein's theory. Or even slower. I think I stayed there six months. Believe me, it seemed like six years. Or even sixty.

The Dotterel: I've been stuck here for 12 years. I wouldn't mind but I only came in to use the photocopier.

You didn't to the commentary for the disastrous "Jurassic Park" ride of death did you?

There's only one thing for it pal, EVOLVE OR DIE!!

Joe: how about mutate or emigrate?

First day back went well then?! BTW, it`s very wacist to make fun of folks who can`t roll their arses!

What a wheelie gwate post, Steve. Wadical change of scenery might be called for by the sound of it...I wecommend a week in my office!

Nana Go-Go: are you welated to Jonathan Woss?

Amanda: are the natives friendly?

It's all in how you dress Steve.

Have you tried Camouflage ? Blending in. Jungle greens, or head to toe special ops black ?

Or, alternately, a nice little Chanel suit, jazzy Moschino sling backs and a Louis Vuitton clutch bag should have even the cattiest predator fleeing in terror.

Strap marks are a small price to pay for photocopier time.

Keith: you may be onto something but I have to say that slingbacks and high heels just put me in a murderous frame of mind. Hmm. Maybe it's time to keep a closer eye on the catwalks of Milan...?

Or should that be the BIGcatwalks ?

mmm...think you need to become a big game hunter...

Nota Bene: trouble is, I think the big game is hunting me.

There's only one thing you can do. Put a fixed grin on your face and sing 'Hakuna Matata' at the top of your voice. It worked in the movie.

Trish: to be honest I'd rather sing "Saturday Night's Alright For Fighting".

All through this post I kept hearing the theme music from Jaws...

The fly in the web: bizarre. Whenever I'm in the office I hear the theme music from Laurel and Hardy. ;-)

Thanks for the tour. And the laugh.

CJ: hope you didn't feed the animals on your way round...!

Thank god you didn't have to commentate any mating rituals. Sorry in advance for any awful visuals that gives you.

Being Me: I have just smashed my binoculars in disgust. ;-)

well, they will smile while they stab you in theback if thats what you mean! (I had a worse analogy but didn't think it would suitable for young children to read...)

Mark: what?! They have to train the to be monkeys??!

Amanda: I thik I've managed to get to the bottom of your point.

Try faking a pregnancy, then you can apply for an extended maternity leave. Try leaving the country and then re-entering as an immigrant with young dependant kids. You can do a Polish accent cant you? Become the first self employed corporate office window cleaner that dresses up as a Jester every day. Call yourself ‘Jester Jiffy Cleaning Services Int’ – think of the kinetic publicity opportunities. Acquire a failed basement restaurant for three months back rent, then blag up a few articles stating that you apologise for being unable to accept any new bookings for at least 18 months due to unexpected popularity, then leak a few tweets around twitter giving out a private phone number for those who don’t mind paying a discreet cover charge in advance to guarantee a table in say four weeks time. Create your own personal CV website, then climb into your jester suit, make a bluddy great sign plastered with your URL and go park yourself by the busiest traffic junction in L.Spa and type away the day on your laptop. Conjure up some way of bumping yourself up the list to become a postman, with some inside help from someone or other. Convince the council that L.Spa needs a golden sandy beach and then explain to them how the publicity alone of conceiving such a notion will be enough to attract a lot of publicity and alternative sponsors etc etc…

Phil: see, some would say that you were being flippant and off-hand but I know you're not and I am seriously writing down all of your suggestions for future reference. Once my therapist releases me from the clinic I'm going to put some of them into action. That's a promise.