The way I’m looking at it, the BBC is a bit of a bungling would-be murderer.

For the last three Sunday nights I’ve greatly enjoyed watching Dangerous Roads, a celebrity based travelogue, in which the BBC pairs up a couple of TV celebs and then sends them out in a 4x4 to some exotic part of the world that these guys could easily afford to visit on their own wages and then makes them drive several thousand kilometres along “one of the world’s most dangerous roads” in the vain hopes of killing them off in a spectacular cliff edge crash.

That the crash never happened is a testament to the safe driving style of the chosen celebs and the fact that some idiot at the BBC quite plainly didn’t think to bribe Orla Guerin to bring back a landmine from Afghanistan.

A missed opportunity, BBC! We could have been rid of the boorish Charley Boorman forever. However, in the case of the lovely Sue Perkins I am rather glad that all Orla Guerin brought back with her were some After Eight Mints and a tin of weird liquorice sweets that nobody in the office actually likes.

But the premise of the show got me thinking.

See, I have a Flip camera (or rather my wife does, but let’s not haggle over ownership issues). I have transport. An old green mountain bike.

And Leamington Spa has some of the most dangerous roads in the county.

I could make my own version of Dangerous Roads and kill off the celebrities of your choice. And I’m pretty sure I wouldn’t need a hooky landmine (only one previous careful owner) to do the dispatching for me – the local flora and fauna would do that without batting an eyelid.

Here’s a quick sneak-peak at the itinerary:

After staying at one of Leamington’s many fine B&B’s your chosen celebs would mount up (one perched precariously onto the handlebars) and embark on their final journey.

The first leg would see them navigating the gum chewing wilds of Bury Road who’s broadly curving cul-de-sacs and St. George’s flag festooned garden sheds have seen many a careless traveller lost to the world – both body and soul – and, if not buried under a patio somewhere, then (a fate equally worse) married off to some 16 year old who's managed to get pregnant at the merest whiff of Lynx deodorant and who’s knowledge of foul language would make Roy Chubby Brown blush.

After that the timorous celebs must then negotiate a safe route through the competing Chav kingdoms of the Kingsway and Queensway estates who’s Burberry lined pathways have caused many a seasoned explorer to go blind and start shopping at Gap. They will need to watch out for roaming packs of hoodies, skateboarders and secondary school drop-outs who smoke like chimneys and who look like they’ve had the faces of World War I veterans grafted onto their pre-pubescent little skulls. If these savages don’t pop a cap into the asses of our erstwhile celebs then their 14 year old mothers surely will.

Finally – the coup d'état (or, more fittingly, the coup de tete) – our beleaguered celebs, by now bemoaning their D list status and wishing they’d stayed working for hospital radio, must traverse the marauding Mad Max 3 wilderness of the Leamington Spa High Street late on a Friday night. Auntie Entity, Master-Blaster and that weird geeky guy who flies the plane and has the face of a camel... they are all here waiting for some unsuspecting ignoramus to venture too close to their fag stained clutches. Steer your bike too close to the cliff edge of alcoholism and you will plummet forever into the churning morass of the gutter far below and find yourself forever more a citizen of Bartertown. Or, as it is more commonly known around here, Battertown.

Charley Boorman is a goner. 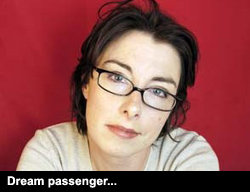 Michael McIntyre, Tom Hanks and Fearne Cotton. Let me know when you're doing it and I'll have some Wacky Races style contraptions fitted to my car and take a drive down to Leam.

Rol: you could just leave 'em to the hoodies but if you want a piece of the action you're more than welcome to come on down... just be aware that most people who come to Leamington never leave...

Kerri Katonia,John Humphreys,Helen Archer ( from the ARCHERS) and Jim Davidson

John: ooh, along with Rol, some excellent choices there. Forget the mountain bike, at this rate I might have to hire a charabanc...

I don't know of any celebrities...so can I have politicians...please?

Tony Blair perched on handlebars and trying to talk his way out of Leamington Spa would be wonderful TV.

The fly in the web: or Tony Blair pedalling / peddling (doing some work for once), with Eric Pickles, Gordon Brown and John Prescott all perched on the handlebars pressing their arses into Mr Blair's face? I'm thinking purely of the additonal entertainment value here. I like to go 'that extra mile'...!

I have a soft spot for Charlie Boorman...he autographed a book for The Boy. Having said that I like all the suggestions so far, and will add Jordan, and anyone on X Factor

Nota Bene: Jordan? Blimey. I'll have to get myself a considerably bigger bike.

Gosh you make the Spa sound so attractive. It would be a shame to jettison a celeb or two there.

You'll hate me for this but I'd happily see Sue Perkins hurtle into the infinite void that is Leamington; along with Jonathan Woss, Stephen Fry and both half of Mitchell and Webb, although if I had to chose it would be David (I'm so up my own fundament it's obscene) Mitchell.

Marginalia: the Delightful Sue? The erudite David Mitchell? The national treasure that is Stephen Fry?!? Begad, I fear we must indulge in a bout of fisticuffs at dawn to settle this the toff way.

I like the sound of your town - it sounds like Britannia before the Roman invasion. You are aware that Sue Perkins drinks from the furry cup and is unlikely to consider your be-whiskered mouth an acceptable subtitute?

Gorilla Banana: your analysis fails to take into account my vajazzled beard.

You can borrow my basket from the front of my bike for yours if you like. I'm so glad someone else thinks similarly about Charlie B - can't stand people who are right up their own posteriors - and he's definitely one of them. Have a good week my friend.

Nana Go-Go: have to say I was not impressed with him on Dangerous Roads... he came across as quite mean, spiky and superior whereas Sue Perkins was just constantly warm and good humoured. I know who I'd choose as my travel companion. ;-)

Suburbia: I'll need to hire a train at this rate!

Celebrities? Not very good at them. But that Geordie duo Ant and Doodah or whatever they're called, they'd be high on my list.

Mark: they can shout, "I'm a celebrity get me out of here" all they like in Leamington Spa but it won't save them. Not one iota.

I think you should put Lindsay Lohan at the wheel and let her loose on some dangerous roads. Extra points for driving on the left.

Where do I start? I have a list as long as your arm, probably longer! I agree with Rol about Fearne Cotton, who single-handedly - and cluelessly - destroyed Top Of The Pops... and yet every Xmas the BBC invite her back to present it!

For now, I'll make do with adding Kate Garraway, Fiona Phillips, June Sarpong, Davina McColl and Clare Balding - who once told a jockey he could get his teeth fixed, with his earnings, after winning the Grand National. I know which part of her anatomy I would've recommended she fix, on her inflated BBC salary, in return!

Wanderlust: I shall have to buy a considerably bigger car...

TimeWarden: some good nominees there... as for Davina, well, I might have to give her a special personal tour of my very own...

No, not the wonderful Sue Perkins. She of the ready wit and close proximity to dubious food. ( I am a 'bake off' fan, 8.00 tonight everyone ) She should be enshrined.

My suggestions - The go compare opera singer, Hazel Blears, and Ricky Gervaise, although I wouldn't condone actual death, but maybe just dangle them so far over the edge they shit themselves in terror. On camera.

I am SO coming to Leamington Spa.

Keith: glad to hear you're a fellow Sue Perkins fan. We can worship at her shrine together and leave votive offerings to her televisual goodness (might I suggest a homemade cake?)... Agree about Gervaise. Though death might be a blessing. For everybody else I mean.

I happen to be acquainted with Mr Boredom I'll have you know (cousin of an old friend of mine). He's alright really. The Kardashians, still the Kardashians, always the Kardashians. Slebs I'd most like to slap, see as roadkill, fed to piranhas... anything really. And Steve, are you SURE you don't work for the Lemmy Spa tourist board?

Wylye Girl: I might offer Mr Boor a reprieve based on your recommendation but you'll have to bribe me with chocolate and Lego. As for the Kardashians, I had to Google them and anyone I have to Google because I've never heard of them before deserves to be drubbed by the lower orders and then cast into the pit of obscurity forever more.

Wylye Girl: p.s. the Lemmy tourist board are actually trying to pay me not to work for them on the ad-hoc freelance basis that I currently enjoy...

Apparently, McCririck actually struggles nowadays with riding old bikes, even when he OD’s on Viagra before mounting up. So that’s at least one mother of a nightmare ‘Her Poshness’ won’t have to worry herself about where he’s concerned then.

Shame though all the same eh, cos it would have been pretty epic to watch him pumping and panting his old peddler up and down right behind her with his tongue all hanging out, while she screamed and flailed about in demented horror from her perch atop his lil ol crossbar there. If you get my meaning…

The paparazzi’s heads would completely explode.

Bish Bosh Bash: damned good call. When contemplating the idea of sex with Posh (an idea that does not plague me at all often) I am reminded of Frankie Boyle's analogy - that having sex with Victoria Beckham must be like getting your cock caught in a deckchair...

Now hang on Steve, what sort of enticement to an intending visitor to Leamington Spa is this?
But this Dangerous Roads lark, well The Sag would probably back me up in nominating Christchurch streets for the course. There are celebs here I could mention too, but you won't have heard of them.

Would it be asking too much for Gordon to be peddled out?

Please, is there any room for Kiera Knightly? Surely there must be. She'd just count as another slat in that deck chair you mentioned.

Lady Mondegreen's Secret Garden: if I haven't heard of them then they deserve a grisly end. It's harsh but it's fair.

Amanda: Brown, Ramsay or Sinclair? Oh never mind. All three would suit me.

Being Me: but those cheekbones... those perfectly porcelain cheekbones upon which has rested the fortune of entire films...?!? Yeah OK. There's room on the back for a little 'un. Strap her on. (And I don't mean anything rude by that at all.)