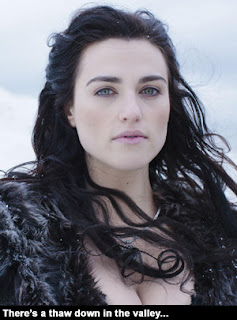 So the BBC’s Merlin closes its doors on Camelot for the last and final time on Christmas Eve.

After 5 series that have been smash hits all over the globe the Beeb now feels it is has “teased out all it can” from the Arthurian legend and it is finally time to knock the myths and magic bandwagon completely on the head.

No more Colin Morgan and his magic jumbo ears.

No more Bradley James and his pouty swordsmanship and swishy nipples.

No more Angel Coulby cinched so tight into improbably tight dresses that her kidneys grind up against her back teeth.

And worst of all no more Katie McGrath spilling her gloriously pale and fulsome décolletage out of impossibly black dresses as she icily stares wanton evilness over all who dare to cross her gaze.

I find the BBC’s decision unfathomable and unpalatable.

Even without the enticing lure of Katie McGrath’s curvy cleavage of evil bouncing across Camelot’s ferociously defended borders and causing fruity mayhem and musky spillages among the goody-two-shoe knights the BBC can’t fail to have noticed that Merlin has been rather good for their revenue stream.

In these days of financial hardship and the tightening of belts I find it inconceivable that any kind of corporation would willingly cut off a single cash supply. Oh I’m sure Merlin costs millions to make – the sets, the locations, the lingerie, the tight security around Katie’s Winnebago that repulsed my siege engines of love countless times... but I bet you it recoups twice that in international TV rights and DVD sales without breaking a bank manager’s sweat.

“Teased the legend out as far as we can?”

There’s loads more they could have done. Loads. I mean, Christ, I could write them a few episodes by next week – provided they were willing to overlook the incongruity of Katie McGrath shod in leather and fishnet stockings sitting astride a vibrating waterbed.

She’s a high priestess of the old religion, for Heaven’s sake, there’s bound to be perks.

Seriously though I find it very sad. Merlin started off a bit too whimsical and kiddie-friendly but then magically matured into a glorious sword and sorcerific drama that restored my faith in the BBC after its appalling run with Robin Hood a year or so earlier.

And now some mealy-mouthed TV exec has drawn up the portcullis on one of the most popular shows of the last 5 years without batting an eyelid or even newting a toad. Or something.

On the bright side though it does mean that when I part with my cash for the Merlin boxed set I know I’ll be getting the complete and entire production output. Unless, of course, they run with my idea for a Christmas special next year (but that all depends on Katie learning to pole dance by then)...

You’ve given me one hell of a sword, BBC, but taken away the stone I liked to fantasise driving it into.

It is indeed a shame that Merlin is ending although I have to say that none of the totty on the programme rock[s] my boat. It's strictly that I watch for totty! (Flavia, Denise, Erin ...)

Tenon_Saw: I know what you mean but Brucie's lame jokes cancel out any positive totty effects before they can fully arouse me.

As the people who wrote this hokum probably looked at the Lancelot-Grail when they were doing their research, it was inevitable that they would eventually feel guilty about the liberties they were taking and call it a day. What the BBC needs is a new, shameless breed of screen writer who can cheerfully go on butchering an ancient legend until it resembles a soap opera in saucy costumes. I think I know where to find one.

Gorilla Bananas: with your kind permission, I'll add your name to my CV. If that doesn't open doors nothing will.

I discovered that mother is an addict of Merlin...but very tight lipped about her reasons.....

My theory is that she was angling to play a sort of Hecate figure so her curses will be joined to yours at the BBC's decision.

The fly in the web: maybe she just likes Richard Wilson as Gaius? He's quite a catch with that flowing white hair and crotchety but kindly countenance.

It is a real tragedy because Miss McGrath won't be teasing me right through my early Saturday relaxation. That Morgana freshened up the trade of being downright evil, damn you BBC. Surely there was other cost cutting you might make do, like the entirety of BBC Three for example...

Löst Jimmy: damned right. I'd like to see a little less of Lord Sugar on the BBC in exchange for a little more of Katie's sugar...

And I had only just started watching this - oh well thank god for the box set that will come out :)

Vicky: hopefully it will be a lavish production in itself.

Clearly it's Katie McGrath that puts the sparkle in your wand.

Now calm down breath deeply and repeat after me "She only an image on a flickering screen".

Marginalia: no. You're wrong. She's real and she's out there and her lawyers have brought out an injunction against me.

We only got the first 2 Seasons of this series here in Canada.
I think that my older sons and I watched Season 3 online but somehow forgot about it.
Funny, I was thinking about it just a couple of weeks ago and wondering if we had missed any of the shows.

I'm happy to hear that I do have some more to watch! It's too bad that it has been cancelled. I hate it when you REALLY love a series and they toss it. :(

Laura: I have to say. they really nailed the final episode. Very emotional without being cliched. Very real. Not a bad way to bow out at all. You've got a treat coming to you!