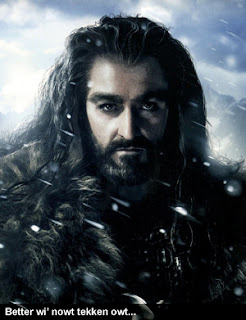 I haven’t read any of the critic’s reviews. This isn’t an especial stance that I’ve taken just for Peter Jackson’s latest outing to Middle Earth; I’ve just never been bothered enough with some “expert’s” opinion to take it as gospel in place of my own. If I want to see a film I’ll go and see it and make my own mind up.

Which isn’t to say I’ve been unaware of some of the more miserly reviews regarding The Hobbit.

Overlong. Too bloated. Not enough story. Christ, some even slag off Peter Jackson’s decision to film it in 48 frames a minute – a complaint I find unfathomable in this world of HD TV and Blu-Ray crystal clear clarity.

Peter Jackson himself isn’t chasing an Oscar in this film. He’s said so in interview.

So you’d think maybe he didn’t try hard enough then, didn’t give the film his all.

That would be a misconception.

The Hobbit is Peter Jackson’s gift, if you like, to all those of us who fell in love with his cinematic version of Middle Earth in the Lord Of The Rings trilogy. It is a luxurious, indulgent, joyous return to that world. It pulls us in and wraps us up warm and invites us to stay for as long as we like.

Yes the film is long. 3 hours and 2 more films to come. But it is not overlong. I could have stayed for far longer. I’m one of those fans of LOTR who choose the extended versions over the cinematic releases every time anyway. Hell, if Pete J has an extended version of The Hobbit up his sleeve then I’m all for it. Bring it on.

Too bloated? No. It is rich. It is full. But it is not heavy on the stomach. It has a gloriously British cast who each in their own way hold the screen and support each other without vying for attention. Peter Jackson has a deft touch. It is great to see Ken Stott and James Nesbitt on the big screen... even if Nesbitt does look like a weird cross between a Cossack and a dwarf.

Best of all though is Richard Armitage as Thorin Oakenshield. Brooding, dark and yet somehow deservingly sympathetic. It took me until the very end of the film before I could place him. The eyes, the voice, I knew them but where from? Gisbourne in the BBC’s Robin Hood and more recently as Lucas North in Spooks. He fills Thorin’s boots effortlessly and is possibly the most attractive Dwarf in the world (if you like your Dwarves to have singing voices like Barry White).

Weirdly it is very easy to overlook Martin Freeman’s role in the film. Not because it is inconsequential – as Bilbo it would hardly be that – but because there is just an expectation that he is naturally going to be good. And he is. He blends into Ian Holm’s portrayal and manages to make it his own all at the same time and rather selfishly we take his faultless performance entirely for granted. But then that mirrors Bilbo’s beguiling humility in the story.

The best scene by far is the riddle scene between Bilbo and Gollum. It is pitch perfect. I cannot fault it. It is the lynch pin of all the films so it damn well had to be. The actors step up to the plate and hit a home run. Spot on.

There are so many other notables in the film – Ian McKellan, Christopher Lee, Sylvester McCoy, Kate Blanchett – I could easily make this post 3 hours long in itself and spoil the entire film for you.

But that isn’t my intention.

My intention is to get you to the cinema to enjoy it for yourself.

After all, I’m just another non-expert critic. Don’t take my word for it.

Go and make your own mind up.

'Riddles in the Dark' is the best chapter in the book and impossible to reproduce on film given that Bilbo
was (a) invisible and (b) shitting his pants. I don't trust your review. You identify too much with all the cheeky beardie characters.

Gorilla Bananas: guilty as charged. And you're not coming anywhere near my ring.

This was my favourite book from my entire high school reading list. None of them came close to the world found myself in while reading The Hobbit.

Being Me: the film doesn't disappoint at all. The magic is complete.

Oh you have won me over. I'm kind of waiting for all the NZ hoopla to blow over before I see it. Have to say that the fervour here is intense. The kids going off to see the film dressed as hobbits and wizards, falling in love with Thorin - and that's just the boys. Certainly expectations are raised. Like Kirrily, the Hobbit along with Lord of the Rings were my favourite books - from childhood right into early adulthood. I could complain about the authenticity of the films but because of the NZ element, here for me the whole thing has melded my fantasy Old World with the landscape of my New World experience: sublime. And hey, if Jackson has made Thorin that adorable then I will be smitten all over again. Great review Steve and I trust your every word!

No doubt three hours of my life will be given over to this...whatever the reviewers say....I'm going to see if I can blink 48 times a second to make it stop-motion

Nota Bene: it is 3 hours you'll be glad you gave.

Lady Mondegreen's Secret Garden has also been known as Hobbiton over the years on account of my family name - Hobby :-) Yeah I ought to be trading on the name right now!

Lady Mondegreen's Secret Garden: if you find a small gold ring when you're weeding... it's mine.

13Haven't seen any of these films....I know, I know....however before you start stoning me, my 2 daughters have seen it and they liked it. That's close enough for me. I wanna see Skyfall!

Amanda: don't mean to rub it in but I've seen that as well.

I for one am very happy to have my annual Christmas trip to Middle Earth back again. Loved it.

But I found Skyfall to be an odd mix of the brilliant and the absolutely awful, with no middle ground.

Ha. Middle Earth to Middle ground in one comment.

Keith: and I live in the Midlands. Beat that!

I'm sure I commented on this yesterday but my comment isn't there. Must have messed up the captcha thing.

Can't remember what I said.

Trish: I bet it was good.

Having seen "Prometheus", R Scott's attempt as breathing life into the "Alien" saga and being bored witless:I'm not over keen to spend three hours Hobbit watching.

The thing is the story is extremely light, Winnie the Poe rather than Frankenstein and skipped along at a jolly pace. Even BB's meeting with Gollum was not too scarey - at least for a 21 year old , the age at which I read the thing.

So I find it hard to see how the film can be made 9 hours long. The pace must change dramatically and change the whole tone of "The Hobbit". So do I cast aside my remembrance of jolly old Bilbo and the gay japes with his Middle Earth friends

Is it "The Hobbit" re-imagined from the top of the Crack Of Doom?

Marginalia: Peter Jackson has added much darkness to the story, tis true, but I like my meat dark so it suits me just fine... plus he's teased out enough threads from Tolkien's other writings to create a rather full plot.

You might be surprised at this - I've already seen it! (extremely rare event, given my hatred of cinema) And I agree it was good. I don't think it was too long, but perhaps a fairer criticism would be that it doesn't exactly resolve the story - hard to do when you're only a third of the way through, so not sure I have a solution.

But what I did HATE was the overuse of ' edge of your seat, Spielburg-esque' type action scenes - they are so ridiculous and unnecessarily over the top. BANG! - see, I just shocked you! Soory, can't stay, I'm falling down a 4000 foot mountain - phew saved by a tree - but whoooa, theres another mountain falling on me now - phew missed me by a whisker - whoooa, a fire ball is coming ...zzzzzzz


Why, oh why, does cinema deem this necessary? If the Golem scene was the best, the parallel sequence on the mountain was easily the worst.

What I so don't 'get' about this type of filmmaking is that it cannot actually be a 'cliff hanger' - because clearly the viewer knows Bilbo won't die in scene 1. Even Dylan was bored!

So broadly a good film, just a pity that Jackson resorted to the same nonsense, intelligence insulting techniques as the Indiana Jones films.

The Bike Shed: I know what you mean though hate it less - this type of scene is the equivalent of a guitar solo in a rock song. I guess you either love testosterone fuelled solos or you don't...

Sorry, you're talking to a non-believer. While I did actually read The Hobbit as a kid (as opposed to LOTR which I couldn't handle on paper and only managed the first film on screen) I can't face 9 hours of it no matter how much I might admire the cast.

Still, I'm glad it was so successful for a true believer. In the end, that's what really matters. I truly believe that every Spider-Man film is made just for me, so any bits they don't meet my expectations I take as a personal affront. I guess this is your Spider-Man, so I'm happy it did the job.

Rol: that's a good way of looking at it. Lord Of The Rings is my Spiderman. The Hobbit is my Batman. Or something like that.